1.Just When You Thought They Could Not Go Lower….Global Government Bond Yields Ex-U.S. at All-Time Lows. 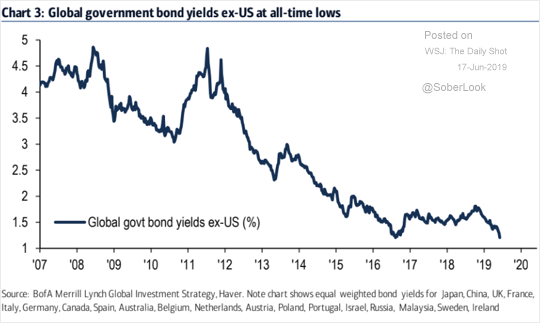 2.On Track for the Most Money Raised in IPO Since 1999 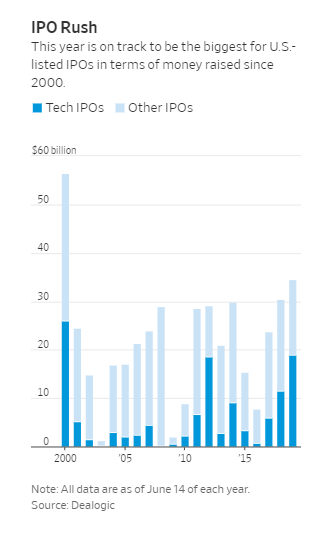 3.Healthcare is Most Active Sector in Last 12 Months 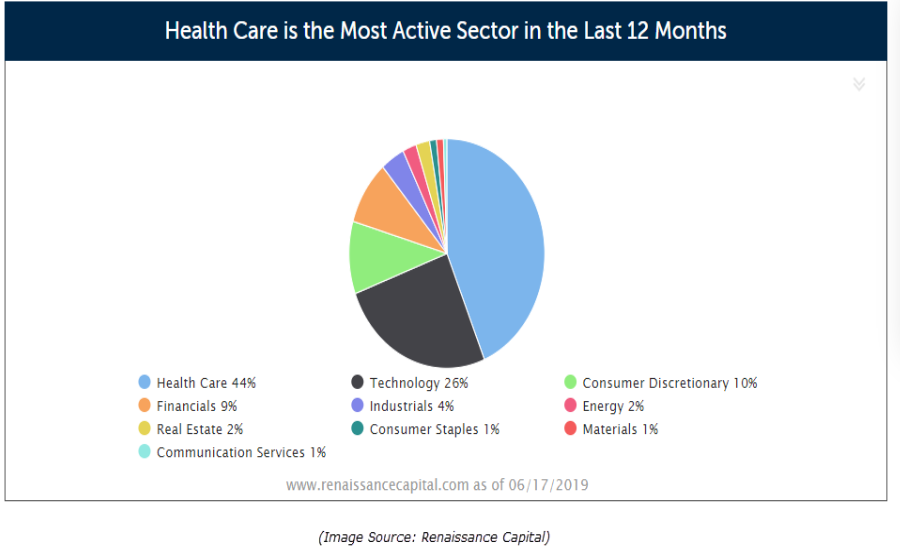 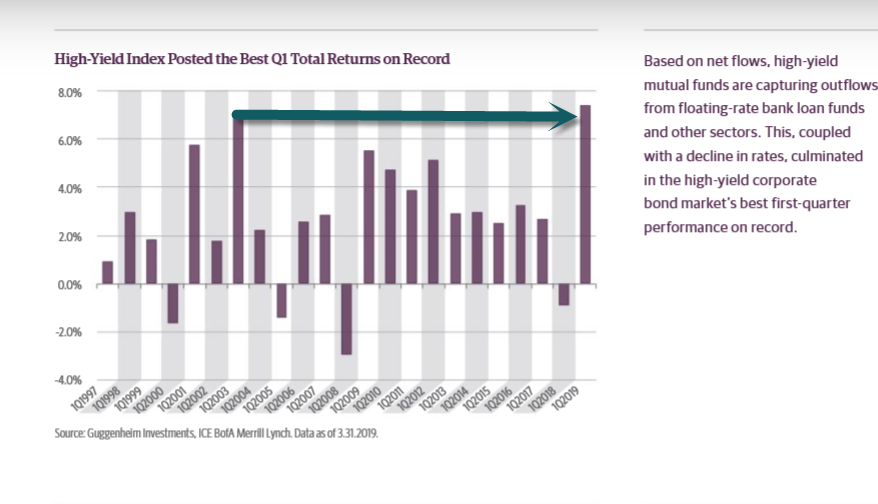 I show this chart occasionally as a measure of global super-wealthy….it was down close to 50% before takeout. 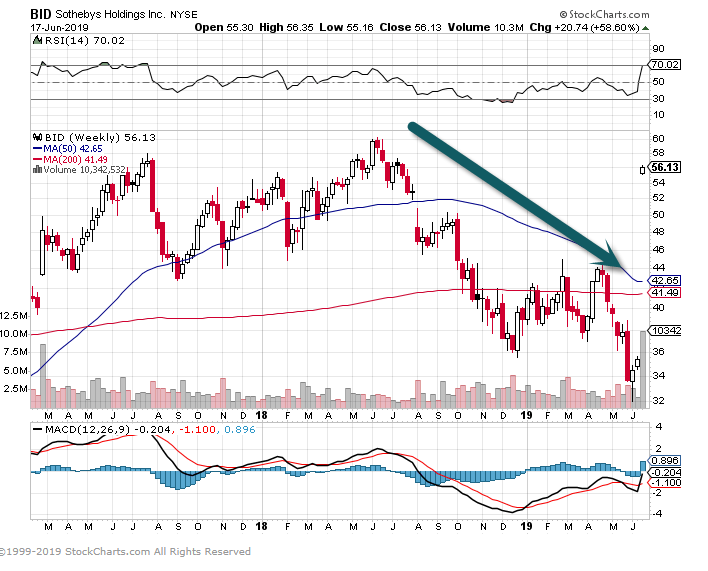 Who is Drahi? With a net worth of $9.1 billion, the French-Israeli founder of telecom and media firm Altice goes to Davos…but he’s tired of sitting at the kids’ table.

The deal of the art: While Drahi’s offering a steep 61% premium to Sotheby’s closing price last Friday, owning an auction house is a bit like owning something you bought at an auction house—it’s more about the cachet than the functionality.

Bottom line, courtesy of Bloomberg’s Chris Hughes: “If you want to be a real tycoon, you have to pay trophy prices for trophy assets.”

Running Out of Workers?

I am not convinced that the demand for labor was hard hit by Trump’s escalating trade war during May. Granted, payroll employment was weak last month, rising just 75,000 (Fig. 1). That compares poorly to the average gains of 186,250 per month during the first four months of this year and 223,250 per month during 2018.

The problem may be that all the anecdotal evidence of labor shortages is actually constraining the growth of payrolls. Perhaps we really are finally running out of workers, or at least those with the appropriate skills and geographic proximity to fill job openings. Consider the following:

(1) Openings. There certainly are plenty of job openings. They totaled 7.45 million during April, exceeding the number of unemployed workers by a record 1.6 million (Fig. 2).

(2) The most. Here were the industries with the most job openings during April: professional and business services (1.241 million), health care and social assistance (1.244 million), and leisure & hospitality (1.004 million) (Fig. 3). Those are roughly the same levels of openings as a year ago, when the job market was also widely deemed to be tight.

(6) NILFs. The problem is that senior Baby Boomers (65 years old and older) are retiring and dropping out of the labor market faster than 25- to 64-year-olds are entering the labor market, while most members of the 16-24 cohort are still in school (Fig. 7).

(7) Small business owners. The report reviewing May’s NFIB small business survey showed that the demand for labor by small business owners remains strong. Last month, 38.0% said that they have job openings, which continues the readings in record-high territory (Fig. 8). The net percentage increasing hiring over the next three months was 21.0%, near previous cyclical highs. However, the percentage complaining of few or no qualified applicants for their job openings was 54.0%.

Twenty-five percent of all owners cited the difficulty of finding qualified workers as their Single Most Important Business Problem, equaling the record high. Fourteen percent of all firms reported using temporary workers. In construction, 59% had openings, and 93% of those openings were for skilled workers. No wonder that construction payrolls rose only 4,000 during May.

The NFIB survey’s job-openings series is highly inversely correlated with both the national unemployment rate (at just 3.6% in May) and the percentage of respondents who say that jobs are hard to get in the Consumer Confidence survey (at only 10.9% in May) (Fig. 9 and Fig. 10). All these indicators portray a labor market that’s been very tight through May, when payrolls rose much less than expected.

(8) Productivity to the rescue? Does it really matter whether payroll employment growth slows because we’ve run out of workers or because demand for workers is weakening? Either way, wages and salaries growth will slow and depress consumer spending and GDP growth. In our opinion, better productivity growth may have started to offset the supply constraints that are slowing payroll gains. Businesses will still have demand for their goods and services and will do what they can to produce more by boosting productivity.

Ed Yardeni is president of Yardeni Research, Inc., a provider of global investment strategy and asset allocation analyses and recommendations. He is the author ofPredicting the Markets: A Professional Autobiography. He is one of LinkedIn’s 2018 Top Voices in Economy & Finance. Follow him on LinkedIn, Twitter, and his blog. Institutional investors may sign up for a four-week complimentary trial to his research service at https://www.yardeni.com/trial-registration-linkedin/.

Increase in physicians since 1970: 150% Increase in health administrators:3200% Someone who’s good at the economy, please help us, our healthcare system is dyingpic.twitter.com/HOIt7THA4H

Found at The King Report https://mramseyking.com/king-report

8.The 5 Pillars of Success.

The 5 Pillars of Success are:

These are the fundamental building blocks of success by and from any individual, anywhere in the world. It’s best to watch the above video, where I break down the nuance in all of this, but let me touch on it all here.

When the world seems to be stacked against you, the great leveler of inequality, opportunity and confidence, is the consumption and absorption of as much education as you can possibly handle. When you know better, you do better. And once you get an education, no one can repossess it. It is yours for life. Your life is expanded and deepened (and better), because of the education you fed your inner soul.

When you know better — you do better.

While today not understanding how the money, economics and the numbers work is a real problem for everyone, is was an absolute death nail crisis situation for former slaves in 1865, when President Abraham Lincoln created a bank to ‘teach freed slaves about money’ called The Freedman’s Bank — and then Lincoln was killed the next month. Frederick Douglass tried to save it but the new institutions’ organizational protector was gone. As a result, African-Americans just ‘never got what I call The Memo (my new bestselling book)’ on free enterprise, capitalism, business, entrepreneurship, ownership and opportunity.

A strong family structure is everything at different times in your life. For me, it was before I was 10, hearing from my mother than ‘she loved me every day of my life.’ Thank you Ms. Juanita Smith. There is nothing more powerful than a child being told that they are loved. Or my father, Mr. Johnnie Will Smith, who showed me how I could be a businessman, because he was one.

SELF ESTEEM AND CONFIDENCE.

Self esteem is how you feel about yourself. The inside you. Confidence is how you express your competence (or competencies). The outside you. Both matter. It’s really hard to achieve most anything, without at least one seated deep in your bones of belief.

Watch how you live your life, it just may be the only Bible that everyone else reads. Role models and role modeling matters. Why? Because we literally model what we see. As I said above, under Family, I am a businessman today because my father was. I love myself because my mother told me to. Whatever you model, you will be. And so, as I also outline in the book The Memo, if you hang around 9 broke people, you will be the 10th. And if you hang around 9 computer engineers, you are also likely to become the 10th.

There are other factors that weigh in on and around success and failure. But as the video makes clear, if you lack say three of these five factors, it’s going to be really hard to climb that mountain called life’s aspiration and emerge victorious on the other side. Not impossible. Just damn hard. I want you to win. So I gave you at least one of the key formulas for success in life itself. And it’s never too late to hit reset in your life, and to re-emerge as the person you actually want to be and to see in the world.

Let me know how you are doing on your journey. And when and if you get stuck, go and see one of my HOPE Financial Coaches at the Operation HOPE powered HOPE Inside Network, the 150 HOPE Inside offices located increasingly across the country. Consider them your community private banker. The Starbucks of Financial Inclusion. Finishing, what President Abraham Lincoln started with the Freedman’s Bank. But this time, programs and services are for everyone who is striving for a better life in a complicated world. All services are free, thanks to the support of our partners and members.

John Hope Bryant. Entrepreneur. Builder. Thought Leader. Founder. Chairman and CEO. Operation HOPE, Bryant Group Ventures and The Promise Homes Company. Author of bestsellers The Memo: Five Rules for Your Economic Liberation, How The Poor Can Save Capitalism, Love Leadership: The New Way to Lead in a Fear-Based World. Get The Memo here.