After a record $53.4 billion in deals during 2018, M&A activity in 2019 has already broken that record, fueled by the $78 billion Bristol-Myers Squibb/Celgene deal and the $7.2B Eli Lilly/Loxo Oncology deal that are now likely to ignite further buyout speculation across the industry1 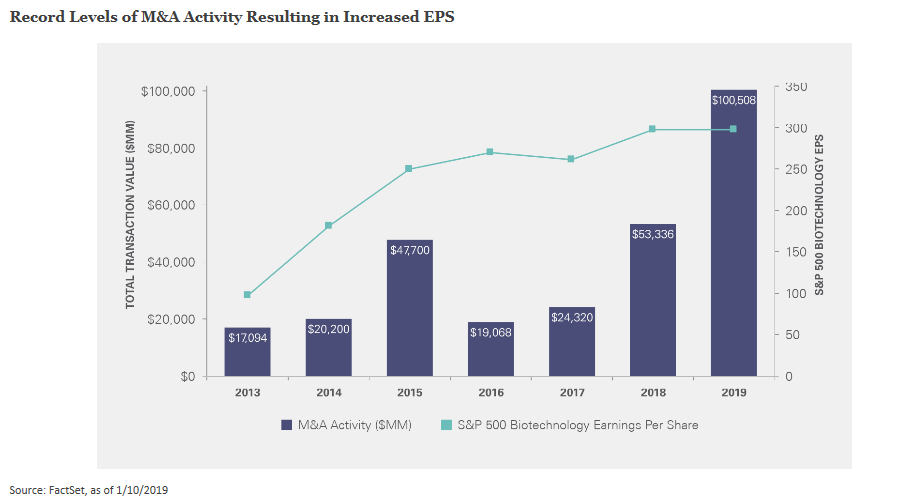 2.The Amount of BBB Rated Debt Outstanding is Now Larger Than the Combined High Yield and Leveraged Loan Indices..Barclays.

If you told someone in 2008 that over the next 10 years, US crude oil production would 1 – reverse a 20+year trend of decline AND 2 – increase by 225% would they possibly believe you? 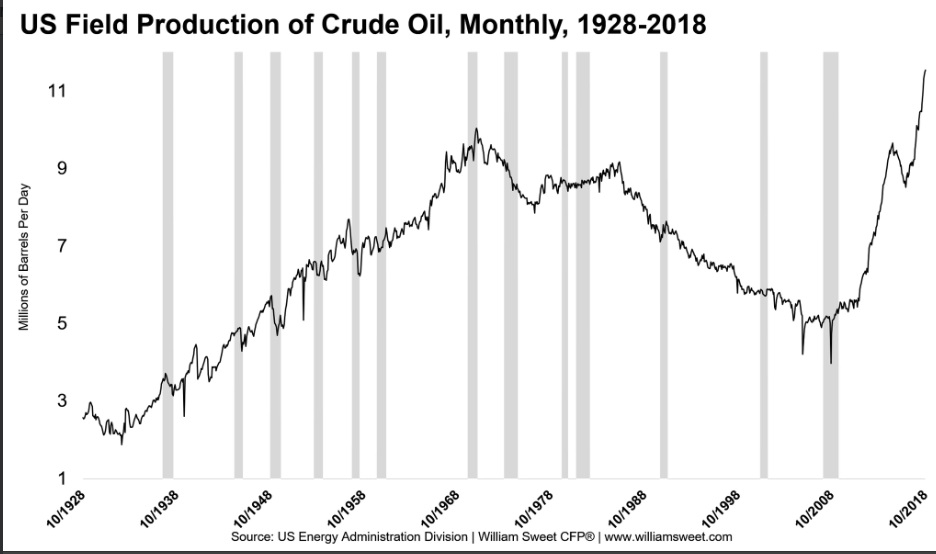 4.Small Caps Off to Strongest Start in 32 Years. 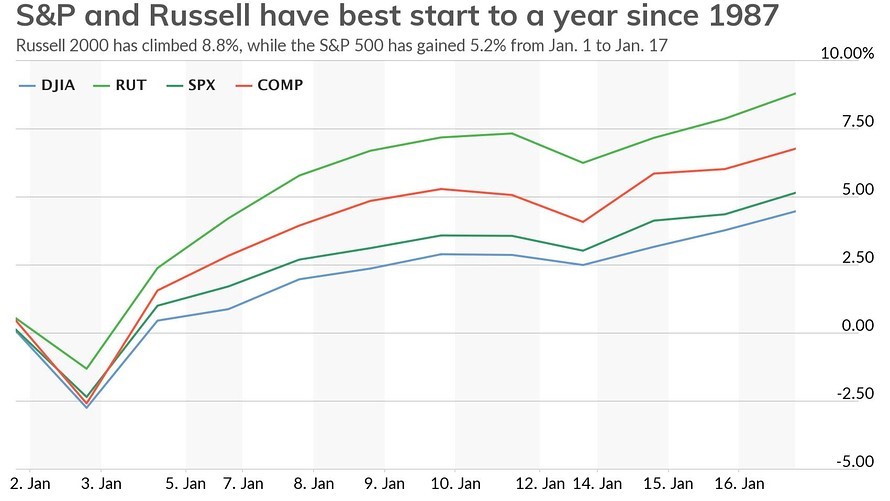 UBS almost cut in half from top in 2018…see if it bounces by end of day. 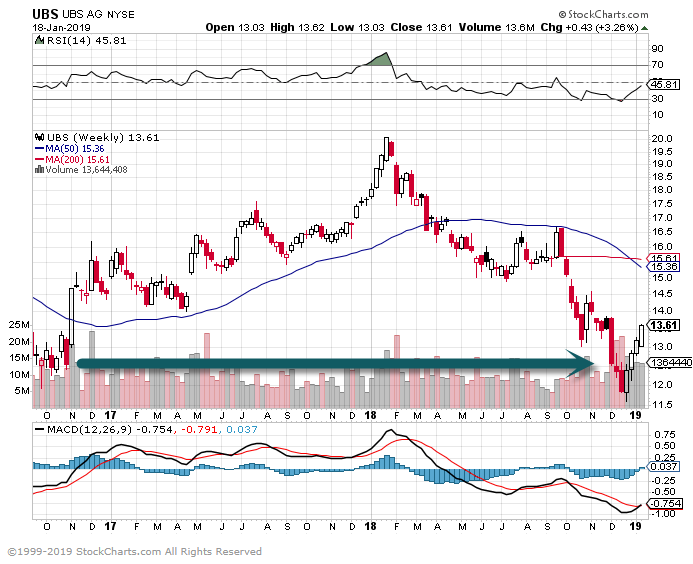 The number of babies born last year fell by some 2 million from 2017, to 15.23 million, it was the least since 1961 and the third-lowest since the founding of the People’s Republic of China in 1949

in China dropped to the lowest level in almost 60 years in 2018, signaling the country’s looser two-child policy has done little to reverse its slowing birthrate, and worsening the outlook for growth in the world’s second-largest economy.

The number of babies born last year fell by some 2 million from 2017, to 15.23 million, data from the National Bureau of Statistics showed on Monday. Demographer He Yafu said it was the least since 1961 and the third-lowest since the founding of the People’s Republic of China in 1949.

The demographics stand to fuel concerns about China’s economy, which is on a long-term slowing trajectory even as signs of stabilization suggest efforts to cushion its deceleration are taking hold. China’s expansion was the slowest since the 2009 financial crisis last quarter, as the government grapples with a debt cleanup and ongoing trade war with the U.S.

Signs of a steep drop in birth numbers had already emerged, as China’s major cities disclosed their birth figures for 2018. Wenzhou, a manufacturing hub and wealthy coastal city, saw its birth number drop to the lowest level in 10 years. A neighboring city, Ningbo, estimated births declined by about 17 percent.

A top Chinese research institution projected the population could start shrinking as soon as 2027 — three years earlier than expected — if the birth rate held steady at 1.6 children per woman. The population — at 1.39 billion in 2017, and the world’s largest — could fall to 1.172 billion by 2065, it said.

Monday’s figures are the lowest since the turmoil of Mao Zedong’s Great Leap Forward, during which China’s aggressive push to develop industrial power resulted in widespread famine. The total population fell by 10 million in 1960, with a large number believed to have starved to death.

In 2016, China eased its family planning policies to allow parents to have as many as two children, instead of one. The nation’s parliament struck “family planning” policies from the latest draft of a sweeping civil code slated for adoption in 2020, the clearest signal yet that the leadership is moving to end limits on the number of children families can have.

The country’s infamous “one-child” policy left China with a worker shortage and an aging population comprised of some 30 million fewer women than men. China’s State Council last year projected that about a quarter of its population will be 60 or older by 2030 — up from 13 percent in 2010. China’s labor force fell by 4.7 million in 2018 — the seventh consecutive year of decline.

“China should not only fully relax the family planning policy, but also introduce policies to encourage births,” said demographer He, who advocates for family planning policy changes based in Guangdong. “Long-term low fertility rates will bring a series of negative effects on the economy and society, leading to the increasingly serious aging of the population, a decreasing labor force and a higher dependency ratio.”

“As the number of fertile women is expected to continue to decline in the years to come amid a decreasing willingness to bear children, China will continue to see its birth number decline,” He said.

China Will Get Old Before They Get Rich 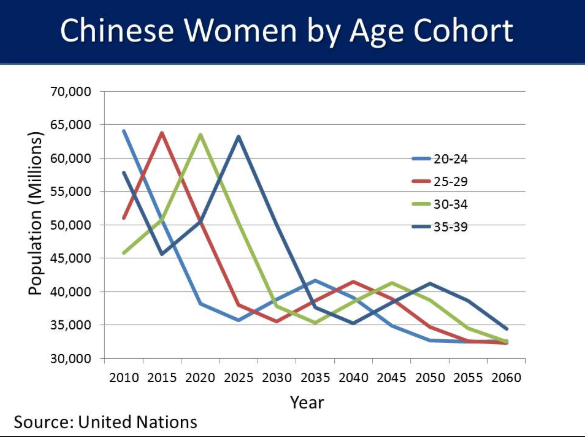 You don’t have to be an Eagles fan–or even a football fan–to appreciate this lesson.

Late last year, Philadelphia Eagles backup quarterback Nick Foles took over for injured starting quarterback Carson Wentz when he suffered a torn ACL. Many believed the Eagles’ Super Bowl hopes had been devastated. But Foles proved otherwise, as he successfully led the Eagles through the playoffs and brought the city of Philadelphia its very first Super Bowl victory.

To say the past few weeks have been a case of déjà vu is a gross understatement.

Once again, Wentz has gone out with a serious injury (this time to his back), and Foles has taken over. Since that time, Foles and the Eagles have won four consecutive games, including yesterday’s playoff victory over the higher-seeded Chicago Bears.

You don’t have to be an Eagles fan–or even a football fan–to appreciate Foles’s accomplishments.

It’s more than the classic underdog story. To watch Foles in action is to take a class in leadership with emotional intelligence, the ability to make emotions work for you, instead of against you.

Check out Foles’s postgame interview after yesterday’s playoff win. Asked what’s going through his mind in these high-pressure situations, Foles said this:

“What I learned on those stages is just how to calm myself in a chaotic moment, when there’s … a ton of pressure. And just really simplifying in my head. Getting in the huddle, looking at the guys that I trust. Know that it’s all on the line for us and we’re just going to get the job done.”

Foles then summed up the lesson in six simple words:

“It’s just belief in one another.”

Foles’s comments may be inspiring, but they’re also backed up by serious research. For example, Google spent years studying effective teams and found that a single factor contributed most to their success: psychological safety.

Google describes it this way:

“In a team with high psychological safety, teammates feel safe to take risks around their team members. They feel confident that no one on the team will embarrass or punish anyone else for admitting a mistake, asking a question, or offering a new idea.”

There’s a simpler term for psychological safety, and it’s one that Foles used repeatedly through his postgame interview:

The word is trust.

And great teams thrive on it.

That trust in your teammates, the belief that Foles speaks about, doesn’t come easily. But Foles used his experience in yesterday’s game to explain how you can build it.

Having admitted that things weren’t going well for the Eagles offensively, Foles gave his defensive players credit for helping keep his team in the game.

“They just kept coming and telling us: ‘We got you. We got you. We’re going to get you the ball back,'” said Foles. “They never turn; they never get upset.”

“It’s about believing in one another–in the hard times. It’s easy to pat each other on the back when things are going well. It’s, hey, when things aren’t going well or when I [make mistakes], what’s going to happen? What happened today is I … made a couple of mistakes, but the guys were there to be there for me, to lift me up. The defense said they got me. And that’s what this team is about.”

That trust, that belief–along with a leader who practices what he preaches and has learned how to stay calm under pressure–is part of what has made the Philadelphia Eagles one of the most dangerous teams in these playoffs.

And it’s what can help you and your team get the most out of one another–in good times and bad.