The 6.6% growth rate for 2018 reported Monday is the slowest annual pace that China has recorded since 1990. The economic downturn, which has been sharper than Beijing expected, deepened in the final months of 2018, with fourth quarter growth rising 6.4% from a year earlier.

Adding to the gloom was the trade conflict with Washington. The uncertain outlook for Chinese exporters caused companies to delay investing and hiring and in some cases even to resort to layoffs–a practice that is often discouraged by China’s stability-obsessed Communist Party rulers. The official jobless rate ticked up to 4.9% last month from 4.8% in November.

In the southern technology and export-manufacturing center of Shenzhen, for instance, many private makers of electronics, textiles and auto parts furloughed workers more than two months before the Lunar New Year holiday, which begins in February, according to business owners and local officials. The neighboring city of Guangzhou saw growth slump to 6.5% last year–well short of the 7.5% annual target set by the city government–as trade tensions hit the city’s manufacturing sector hard.

Some economists and investors have said China’s economy is far more anemic than the government’s 6.6% rate of expansion for 2018. They note the government’s move on Friday, just ahead of Monday’s data release, to cut the 2017 growth rate to

Write to Lingling Wei at lingling.wei@wsj.com 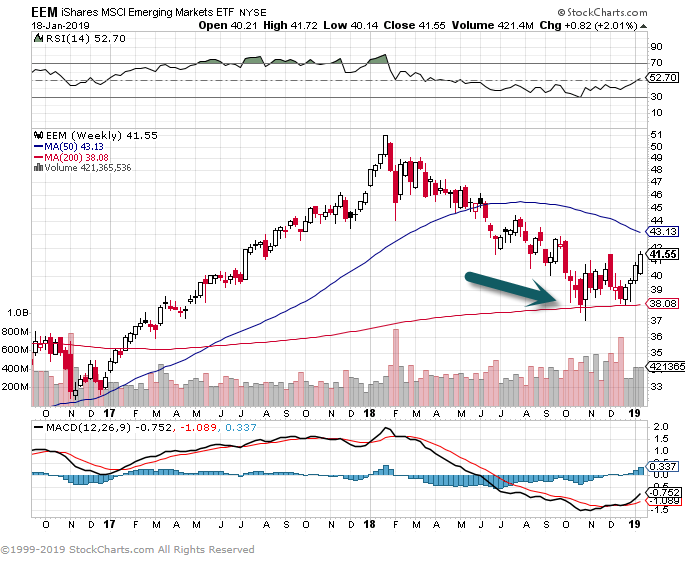 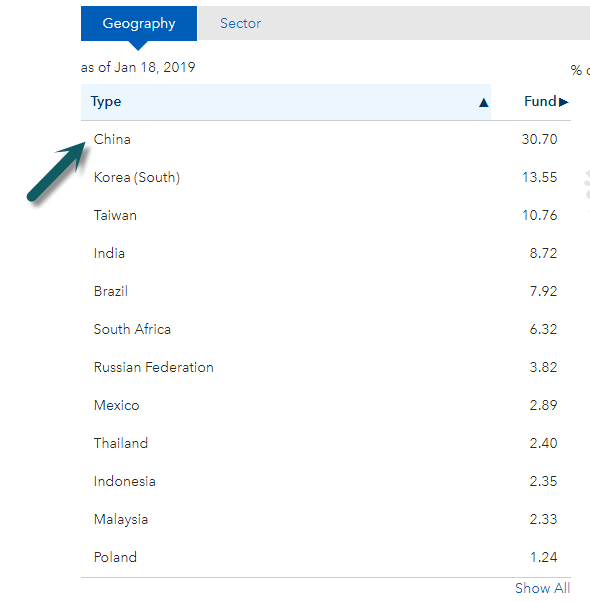 2.The Question of 2019…Is China Growth Bottoming? 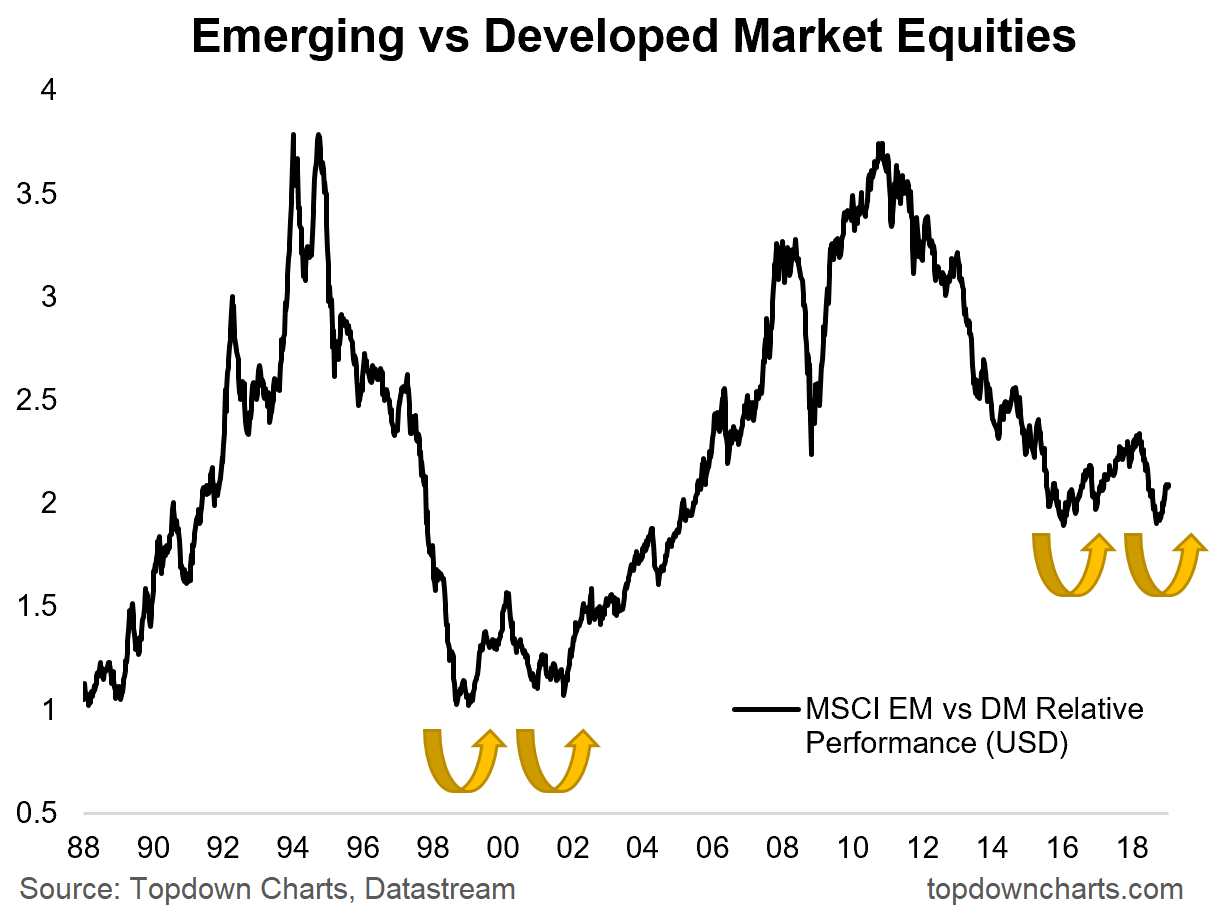 The Bespoke Report — Call It A Comeback

2019 continues to track the complete opposite of what we saw in Q4 2018, with the hardest hit areas during Q4 bouncing the most off of their lows this year.  Smallcaps are leading the way with gains of nearly 10% on the year, while Energy (XLE) leads all sectors at +11.32% on the back of oil’s (USO) 17% surge.  Brazil (EWZ) leads all countries in our ETF matrix with a YTD gain of 13%, which is a rare continuation of what we saw for Brazil to end 2018.  Canada (EWC) is also posting a solid showing in 2019 with a double-digit percentage gain already.  The only areas of weakness are India (PIN), precious metals, and Treasuries.

For in-depth analysis of recent price action, sector technicals, earnings season, the economy, and more, start a two-week free trial to one of our three membership levels and read this week’s Bespoke Report newsletter.  You won’t be disappointed! 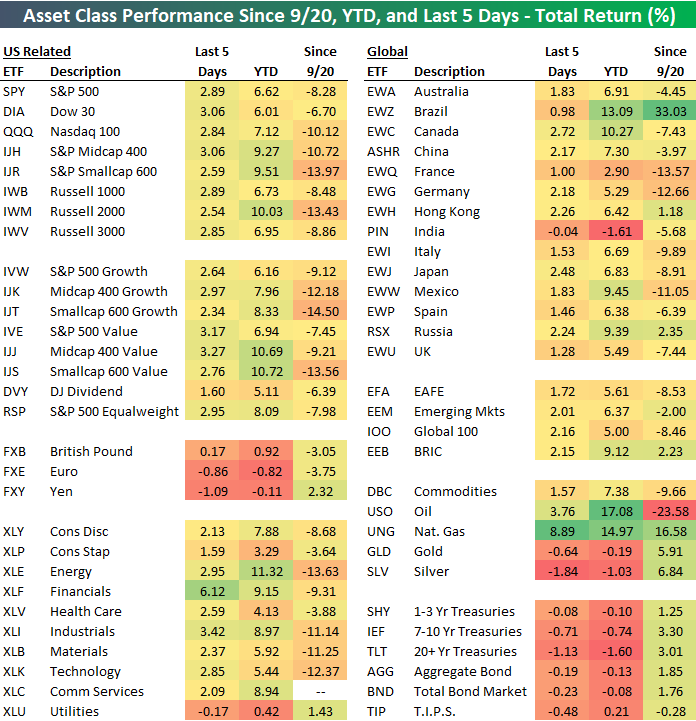 4.High Yield Spreads Roll Back Over.

After spike up at end of 2018…spread roll back over. 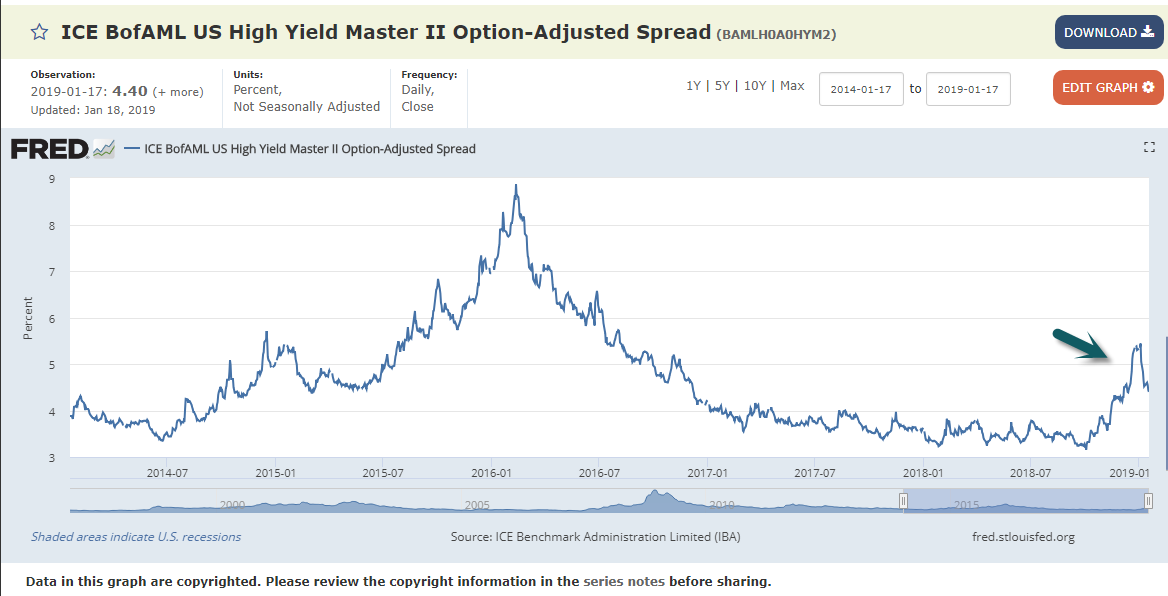 6.One Month Ago Close to Bottom…Market was at “Max Fear”….

8.How the Energy Industry has Changed….Saudis Investing in U.S. Energy.

Aramco’s potential deal to invest in U.S. liquefied natural gas projects would mark a sea change in the energy flows between the U.S. and Saudi Arabia

Saudi Arabia is nearing a deal to invest in U.S. liquefied natural gas, a landmark decision for the kingdom, which in the past had been a huge supplier of energy to America.

Saudi Arabian Oil Co., known as Aramco, has narrowed its focus to a shortlist of at least four U.S. LNG projects and intends to announce a deal in the first half of this year, people familiar with the matter said.

Companies with projects being considered include Tellurian Inc., a Houston-based LNG developer known for its intention to ship gas from its planned Driftwood terminal in Louisiana, the people said. In addition, San Diego-based Sempra Energy, which is developing five LNG projects between the U.S. and Mexico, has had discussions with Aramco concerning its Port Arthur project in Texas, the people said. Aramco is considering equity stakes in the projects, the people added. It wasn’t clear what the value of the potential investments was.

Any such investment would mark a sea change in the energy flows between the U.S. and Saudi Arabia. America’s shale revolution has broken years of dependence on Middle Eastern oil, to the extent that the International Energy Agency expects the U.S. to become a net energy exporter by 2023.

“One reason is the geopolitical aspect of how to keep the U.S. close and maintain the strategic relationship, and secondly they see LNG as diversifying, investing in a fuel that would have perhaps more of a lifespan than a straight crude oil play.”

Aramco doesn’t produce any oil and gas abroad, and while Saudi Arabia’s own gas reserves are some of the largest in the world, they are hard to extract and high in sulfur, making them cost more to process.

Nearly all of the kingdom’s electricity is powered by oil or natural gas, but there are plans to diversify that into more natural gas and renewables, in part to allow more crude to be exported. A study published last year by Saudi Arabia’s government-funded think tank, King Abdullah Petroleum Studies and Research Center, found that shifting from oil to natural gas power generation had a positive impact on the economy, even if the gas was imported.

Saudi Arabia said in October that it is considering investing in a stake in Russian energy giant PAO Novatek’s Arctic LNG 2 project, although no deal has been formalized. Aramco intends to make LNG investments in both the U.S. and Russia, the people familiar with the matter said.

“By also investing in Russia they’re giving themselves options, trying to demonstrate that the Kingdom is trying to hedge against over-dependence on the U.S.,” said Mr. Feer.

—Ben Dummett contributed to this article.

Write to Sarah McFarlane at sarah.mcfarlane@wsj.com and Summer Said at summer.said@wsj.com

By Prashant Gopal and Jonathan Levin

For the past year, Florida real estate agents have been actively courting wealthy Northeasterners who took a hit from the Trump administration’s tax overhaul. Now signs are emerging that some of those disgruntled taxpayers are indeed jumping at the chance to cut their tax bill by moving to Florida.

Luxury sales are slowing across the country, from New York to California, but they’re rising in South Florida. Million-dollar home sales in the fourth quarter jumped 7.5 percent from a year earlier in Miami-Dade County, 17 percent in Broward County and 15 percent in Palm Beach County. In Fort Lauderdale, the median price for a luxury condo jumped 26 percent to almost $1.6 million, according to data on the top 10 percent of sales released today by appraiser Miller Samuel Inc. and brokerage Douglas Elliman Real Estate.

Donald Trump’s tax overhaul got Bloomington, Illinois, executive Jim Morris looking at South Florida for a $10 million-plus mansion with his own piece of beach, low property levies and no state income tax.

“It’s not just the weather,” he said. “The advantages of the tax code are greatly appreciated.”

While the tax advantages of relocating to Florida vary depending on income and where the people are moving from, residents of high-tax states who are able to relocate are checking it out, say local brokers. Morris, 58, said he may even bring his packaging company’s headquarters with him. Hedge fund managers, retirees and other wealthy folks from high-tax states are also looking at Florida.

Real estate brokers in the state are targeting buyers from the Northeast and other parts of the country with higher property and state taxes as Latin American buyers have pulled back amid political and economic unrest at home and a plunge in their currencies against the dollar. Last year’s federal tax bill, among other changes, limits deductions for state and local tax. The savings would mainly accrue to those making more than $1 million per year.

“New Yorkers are the new foreign buyers in Florida,” said Jonathan Miller, president of Miller Samuel. “For people who were looking for a reason to make domicile in Florida, the new tax laws made that decision easier.”

“New projects in Broward are going to skew your statistics more than they will
in Miami,” he said. “All three counties are going to be benefiting from this tax migration.”

Jorge Perez, the billionaire Related Group chief executive, said he sold 83 of the high-end condos at his Auberge Beach Residences & Spa in Fort Lauderdale last year. He added that foreign buyers are still coming to Florida and Broward County might finally be shedding its reputation as purely appealing to Americans.

“That spurt from international buyers has helped Fort Lauderdale a lot, because before it was purely a local and national market,” he said.

Michelle Noga, an agent at William Raveis South Florida who is working with Morris from Bloomington, said customers have been paying close attention to Florida residency requirements.

“I just finished a showing with some people from Boston,” she said of the retirees. “They want to live there for six months and one day.”

The tax changes have been good for the Palm Beach Hedge Fund Association, which has seen its membership swell to 1,700, increasing 10 to 15 percent over the past year, according to founder Dave Goodboy.

“I get phone calls on a weekly basis with people wanting to relocate here, both firms and individuals,” Goodboy said. “About 80 percent of our members are in the area. The rest are interested in coming here.”

Morris and his wife, Lori, began searching in Palm Beach about nine months ago. While most of his more than 400 employees work in manufacturing plants, he has been talking to the 20 employees in the company headquarters about a possible move, he said.

“We’re looking for the right estate — I want my own piece of beach, basically,” Morris said. “Right now, we pay a lot of state income tax.”

Patek Philippe May Come Up for Sale, Berenberg Analysts Say 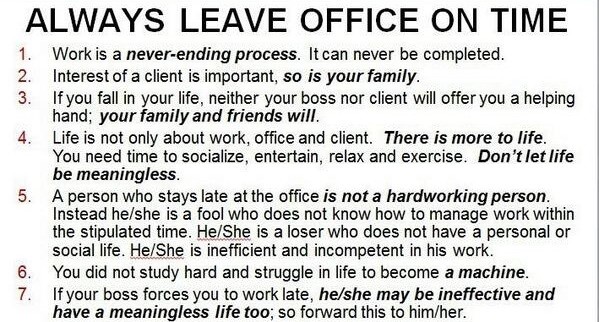 I recently shared an image and comment on why I genuinely believe that we all need to practice the art of leaving the office on time. Admittedly I did not expect the 3k’s worth of likes and 100’s of comments however I wanted to share why I genuinely believe that to achieve the high’s of both professional and personal life you absolutely need to pay attention and ‘leave the office on time’.

Over the last 10 years I’ve constantly heard the wonderful phrase of work life balance, ‘Work–life balance is a concept including proper prioritizing between “work” (career and ambition) and “lifestyle” (health, pleasure, leisure, family and spiritual development/meditation)’.

So what does this really mean and why do I genuinely believe in leaving the office on time?

I could go on for hours as this is a subject dear to me. I was a son with a father I rarely saw due to work. I’ve seen families torn apart because parents put work before family. I’ve heard of young fathers passing away because of stress at work and working 16 hours a day.

ALWAYS LEAVE THE OFFICE ON TIME.