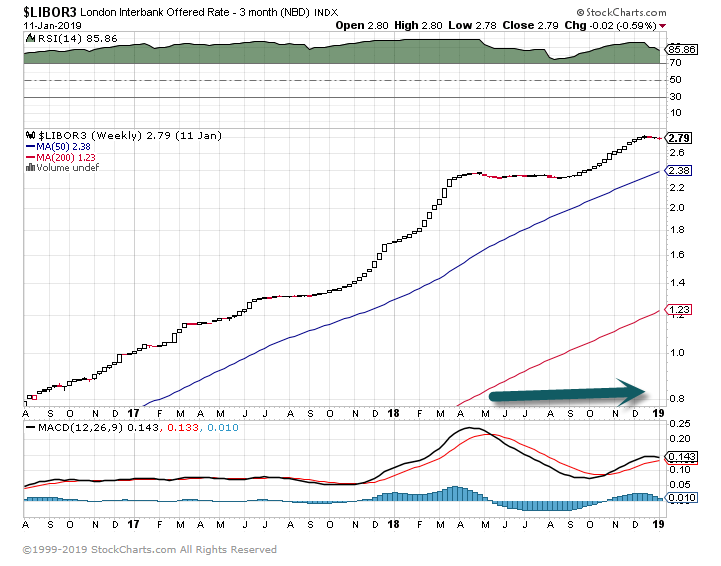 U.S. airlines appear to be priced like they’re about to go out of business. Again. Shares of the major carriers are trading at less than eight times 2019 earnings. That’s a 45% discount to the broader market, even though airlines have higher operating margins and better free cash flow than the average company.

Airline Stocks Are Pricing In a Downturn. We Disagree.
By
Al Root

To my trend following friends seeking equity market tail risk protection (there may be other reasons to use trend): I count ~11 big kahuna drawdowns on US equity from 1927 to 2018. Question: How many quants does it take to screw in an explanation for 11 independent events? 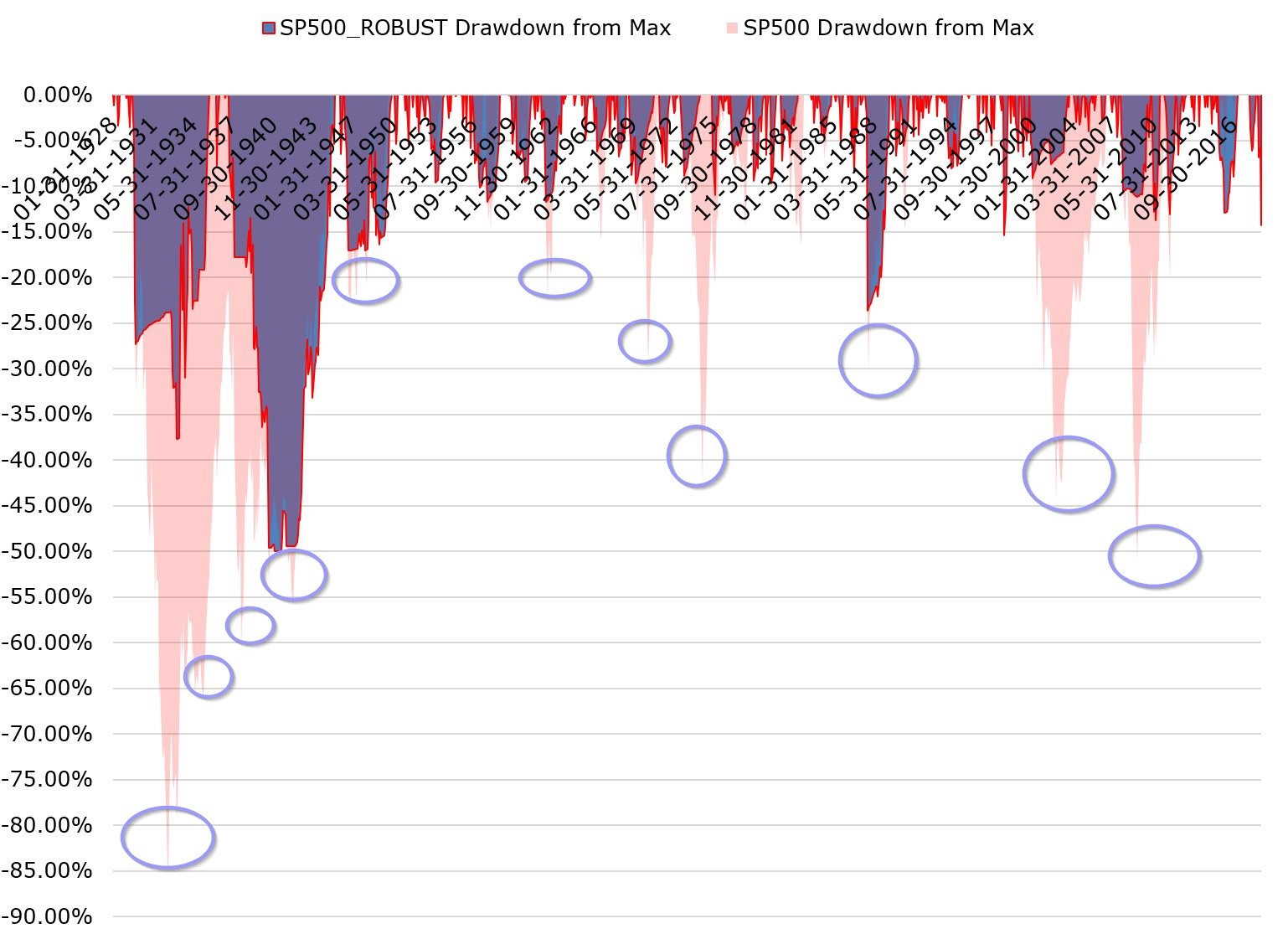 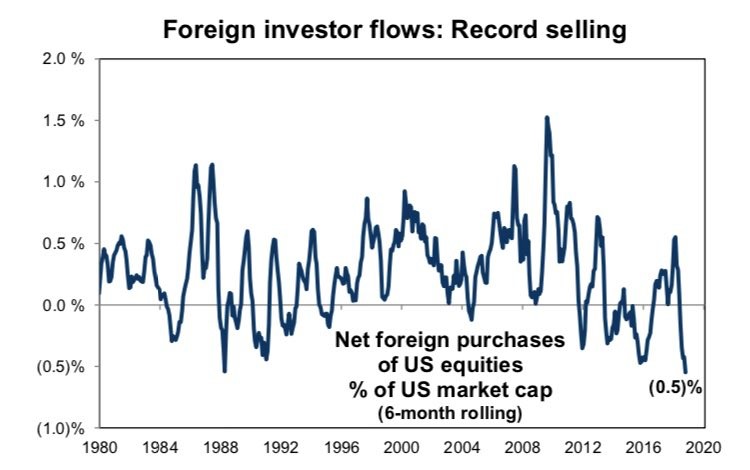 5.All the talk of FANG domination is “Hogwash” ..Top Stocks of Today Less of the Overall Market than Earlier Eras.

WSJ–Talk to any professional stock-picker and you will get an earful of whining about how today’s market is “narrow” or “concentrated” or “top-heavy,” with the largest stocks accounting for an unusually large share of total value. 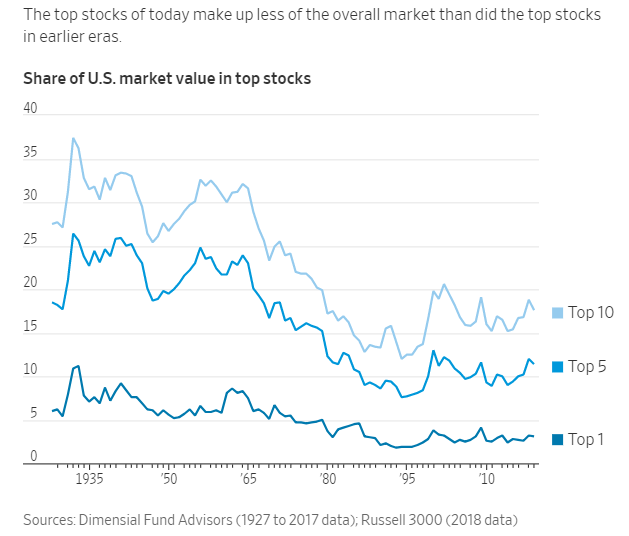 What Amazon’s Rise to No. 1 Says About the Stock Market

6.GOLD HAD A RUN OF 13 STRAIGHT DAYS HIGHER.

GLD-DEC WAS BEST MONTH IN 2 YEARS..IT HELD ABOVE END OF 2016 LOWS BUT NO NEW HIGHS YET 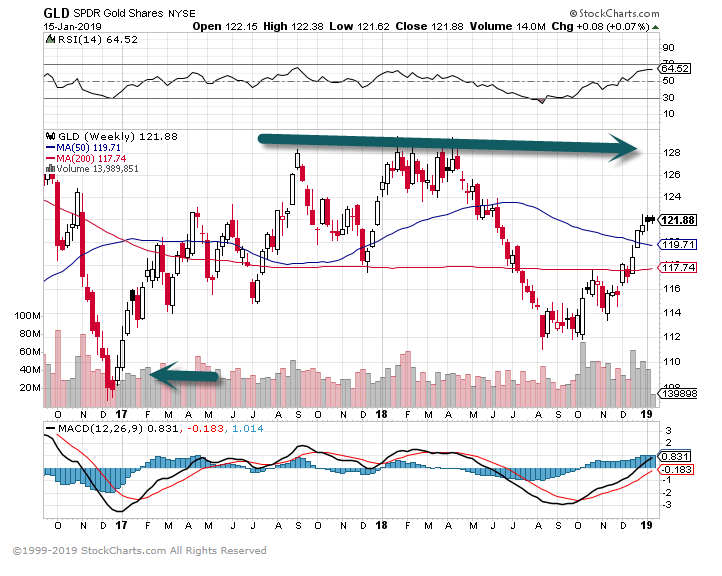 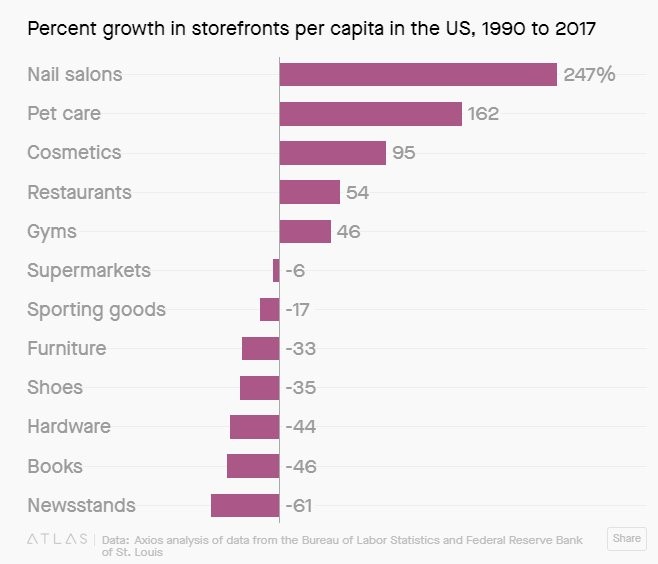 For two decades, biotech companies trying to tackle Alzheimer’s disease have had little success. While vaccines have often shown promise for certain patients, they’ve come with devastating side effects for others—brain swelling, for example—because researchers haven’t been able to reliably keep patients’ immune systems from kicking into overdrive when exposed to the vaccines’ antibodies. That is until now, according to United Neuroscience Inc.

To be clear, the four-year-old Dublin-based startup hasn’t solved Alzheimer’s yet, nor has it claimed to. But previously unreported results from a small, recent United clinical trial show that 96 percent of patients responded positively, without serious side effects, to the Alzheimer’s vaccine the company calls UB-311. The patients demonstrated improved brain function and showed a reduction in the protein plaque gumming up their neurons, the company’s report says. “We are doing better than the placebo on all these things,” says Chief Executive Officer Mei Mei Hu. “We can’t make any claims yet, but we’re pointing in all the right directions.” 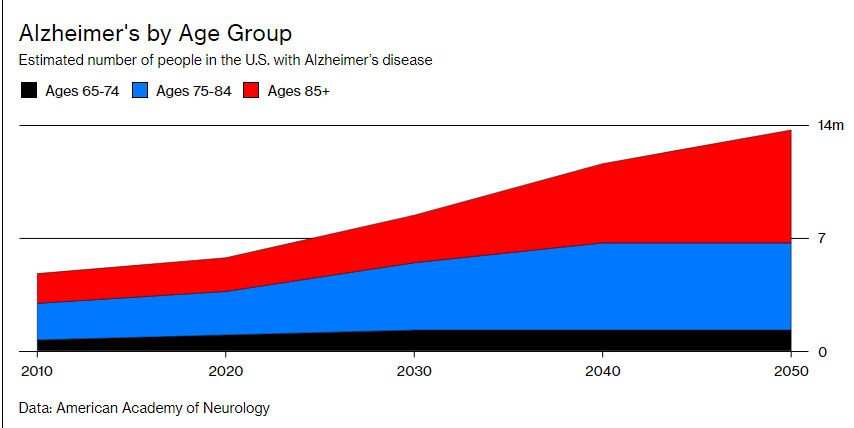 Alzheimer’s by Age Group
Estimated number of people in the U.S. with Alzheimer’s disease
Data: American Academy of Neurology

9.Read of Day….Self-Driving Cars Are Out. Micromobility Is In.

It’s amazing how quickly perceptions can change. It may seem hard to remember now, but in 2017, the hype machine was going full steam ahead on self-driving cars and their presumed future dominance of transportation. Cars would still dominate—many presumed—but drivers would be liberated as software took over their role, making everyone a passenger.

The fatal Uber crash hadn’t happened yet. People still believed that Tesla’s Autopilot system was safe and that full self-driving was on the horizon. The reporting on autonomous vehicles suggested they were safer than human drivers, despite a complete lack of evidence. The tech visionaries had spoken and, as is often the case, the media fell in line.

But, as 2018 began, criticism began to emerge amid delayed timelines, a growing number of collisions, and the slowing progress in reducing the number of times human test drivers had to take over for computers. As the year played out, critics were proven right — but a much more inspiring vision for the future of transportation has emerged in the wake of the self-driving vehicle.

Waymo, a division of Alphabet, has long been a leader in autonomous vehicle technology. Based on the limited data released on the company, its vehicles have driven the most miles in self-driving mode and have the lowest rate of disengagement (moments when humans have to take over).

But Waymo’s CEO, John Krafcik, has admitted that a self-driving car that can drive in any condition, on any road, without ever needing a human to take control—usually called a “level five” autonomous vehicle—will basically never exist. At the Wall Street Journal’s D.Live conference, Krafcik said that “autonomy will always have constraints.” It will take decades for self-driving cars to become common on roads. Even then, they will not be able to drive at certain times of the year or in all weather conditions. In short, sensors on autonomous vehicles don’t work well in snow or rain—and that may never change.

Such a statement from someone leading a self-driving vehicle company seems surprising. But given what’s happened throughout 2018, it shouldn’t be. A number of negative stories about self-driving cars permeated the year’s coverage, including the deaths of those using Tesla’s Autopilot technology. The effect of an Uber self-driving car killing a woman in Tempe, Arizona, cannot be understated. That singular event broke through the largely uncritical mainstream coverage of autonomous vehicles; it showed us how far the technology really had to go before it could be safe.

No longer does anyone credibly claim that self-driving cars are the future of transportation.

10.How to Calm Your Racing Mind So You Can Sleep

Can’t fall asleep? These 7 questions will help you figure out why.

You long for sleep. You may even feel tired before going to bed. But as soon as your head hits the pillow, it happens again. You’re wide awake. You can’t stop thinking. It’s the worst.

I regularly speak to groups about the necessity of sleep for prevention of burnout, management of stress, improvement of mood and a host of other benefits. Almost every time I do, someone comes up to me and says:

“I know I need more sleep. But what do I do if I can’t fall asleep? I get into bed early enough to get eight hours, but then I just lie there with my mind racing.”

I also frequently hear this from coaching clients and patients. When I do, I start asking questions. And usually find the answer.

Here are the questions, for you to ask yourself:

First of all, the light from the phone is stimulating to the brain and can suppress melatonin release (melatonin helps you sleep). The best solution is to not look at your phone after 9 pm (or an hour or two before bed), but lots of people aren’t ready to give up that habit. If that’s you, use a blue light blocking mode like “Night Shift” on iPhones and turn your screen brightness down as far as it can go.

2)    What are you reading or doing in bed, before you go to sleep?

This is my second point about the phone. I once heard a sleep expert at Harvard say that texting at bedtime is a bad idea. The thought processes that you use are too stimulating to your brain. Obviously, checking work emails (or any email) at bedtime is a really bad idea, especially if you come across something stressful. You may not even want to read the news, in case there’s a headline that stimulates thoughts or concerns.

If you like to read to wind down, choose a book (the printed kind). Ideally, that book should not be too thought-provoking or stimulating. It shouldn’t be disturbing. It also probably shouldn’t be so incredibly captivating that you can’t put it down…

If you have trouble winding down to sleep, take care not to wind yourself up over the course of the evening. Good rules of thumb:

Notice what “winds you up” in the evenings. Either avoid it or schedule it much earlier.

This is another key to winding down. People used to sleep an average of nine hours a night, before the advent of widespread electricity. The lights we have on at night in our homes are stimulating and can also suppress melatonin secretion.

5)    Is there something specific you’re worried about?

Perhaps there’s a stressful situation you can’t stop worrying about, keeping you awake. In this case, I’d recommend a variety of approaches:

Leverage the strategy of “stimulus control.” If you do lots of different things in bed (watch movies, answer emails, take phone calls etc.), your body and mind get confused about the purpose of bed. If you have insomnia, it’s best to only use your bed for sleep. For the same reason, if you can’t fall asleep, get out of bed and go do something quiet and relaxing until you start to feel sleepy and then head back to bed.

7)    How much caffeine are you drinking?

The sleep expert I mentioned earlier also said that if you struggle with insomnia, you should eliminate caffeine (and any other stimulants) completely and see if that helps. If that feels impossible, start by eliminating caffeine in the late afternoon or evening. Sources of caffeine include coffee, non-herbal teas, chocolate and some supplements.

Note: some people who can’t sleep have a bigger issue, such as Generalized Anxiety, Bipolar Disorder or other medical concerns. If your sleeplessness is extreme or doesn’t respond to simple interventions, it’s important to talk to your doctor about it.