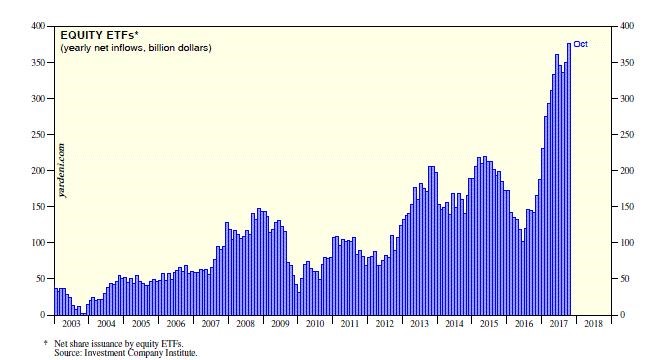 Investors poured nearly $30 billion into U.S.-listed ETFs in the past week, bringing total net creations so far in 2017 to $466 billion.

The massive, record asset-gathering pace now sits just inches away from what could be a new milestone for the ETF market: $500 billion in net inflows in one calendar year. With two weeks to go in December, hitting $500 billion seems very likely.

For perspective, consider that 2016 also saw record-breaking asset gathering in the U.S. ETF space, with net creations reaching $287.5 billion last year. We are on pace to almost double that haul in 2017. What’s more, combined with performance, the asset inflows grew the ETF market to $3.4 trillion in total assets—that’s almost $1 trillion bigger than where the market sat a short year ago.

2.We Set the Record for New Highs Per Year in Dow.

A Record for Record Highs 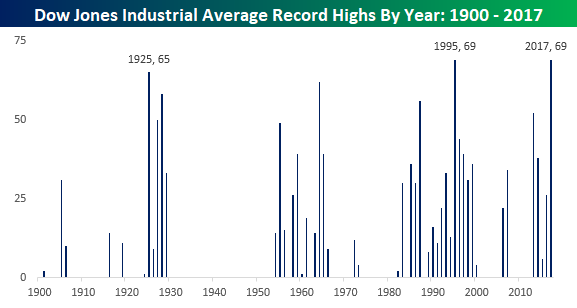 4.More Evidence that Active Managers have Gone All In.

A survey of active investment managers is presently showing the highest level of equity exposure on record.

As the end of the year approaches, the question on everyone’s mind on Wall Street is will the famed Santa Claus Rally show up this year? Given the fact that the stock market has managed to bypass adversity in 2017 about as well as any year in history, we’d be hard-pressed to bet against the year-end rally. Another group of investors feels that way as well and is putting their money where their mouth is — big time.

The National Association of Active Investment Managers, or NAAIM, is made up of Registered Investment Advisors and other money managers who employ active or tactical investment strategies as opposed to buy-&-hold and passive asset allocation. For the most part, the goal of such strategies is to reduce investment risk by applying processes to mitigate losses when they view markets as high-risk. Apparently, this group sees very little risk in the market at this time — or else they see Santa’s sleigh headed this way — because they’re currently throwing all caution to the wind.

That interpretation is according to the NAAIM Exposure Index, a survey of the group’s collective equity allocation. Based on the latest reading of the Index, these active managers have an average of 109% exposure to the stock market. Yes, 109%, meaning the average manager is leveraged long. That is the highest reading in the survey’s 11-year history, and the 12th reading over 100%. 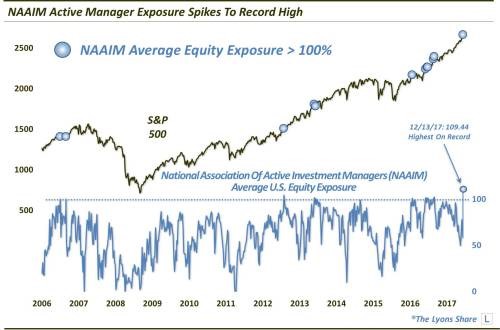 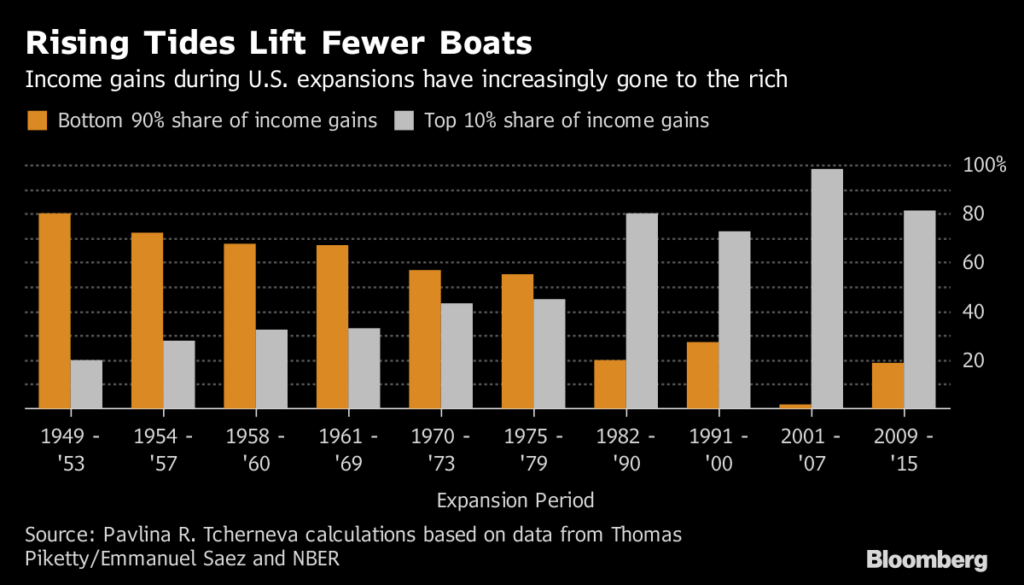 6.Anything with Bitcoin/Blockchain in Holdings is Up Big….ARKW ETF +87% YTD.  8% Blockchain??

Companies within ARKW are focused on and expected to benefit from shifting the bases of technology infrastructure to the cloud, enabling mobile, new and local services, such as companies that rely on or benefit from the increased use of shared technology, infrastructure and services, internet-based products and services, new payment methods, big data, the internet of things, and social distribution and media. These companies may develop, produce or enable: 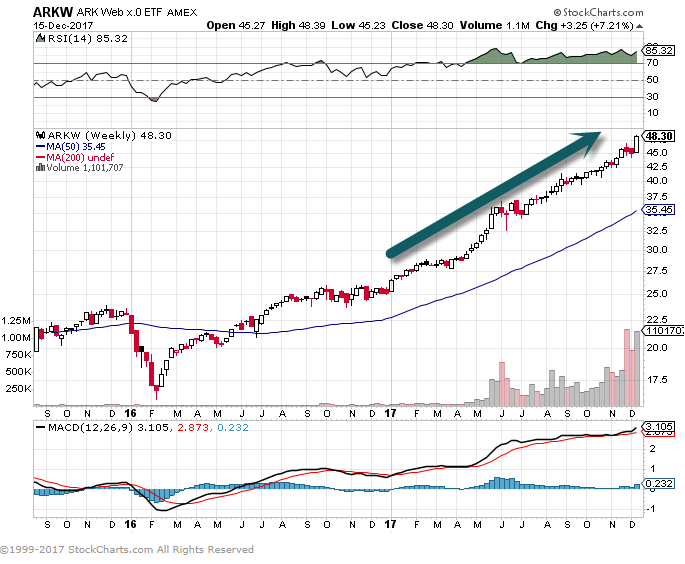 7.Read of the Day…Bitcoin Illiquidity

Bitcoin is becoming more and more illiquid as time goes by.

This chart shows a seven-day average of the total number of minutes it takes to conduct a bitcoin transaction, since May 2016. Like the price of bitcoin itself, transaction time has been rising as the months go by. At the time of writing, it took four-and-a-half hours to confirm a bitcoin trade, on average:

If you are holding bitcoin, and you’re worried that the price is a bubble — it cleared $17,000 last week — then bitcoin transaction times should really start to scare you. The price of bitcoin is shifting up and down by hundreds or thousands of dollars each day. No one knows what the price will be one hour from now, except that we know it will be very, very different.

The transaction time is built into the system. Each transaction must be confirmed by six bitcoin miners, and that takes time. There is a finite number of miners, and the more transactions they have to confirm, the longer it takes as their network bandwidth gets filled. Worse, they charge for transactions and prioritise transactions based on price. Those who pay more get processed first. 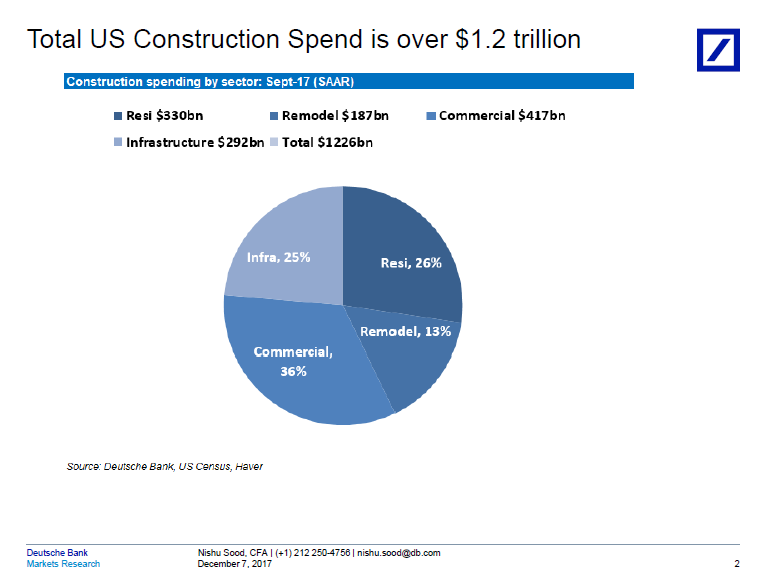 9.Research and Development as a Percent of Federal Budget 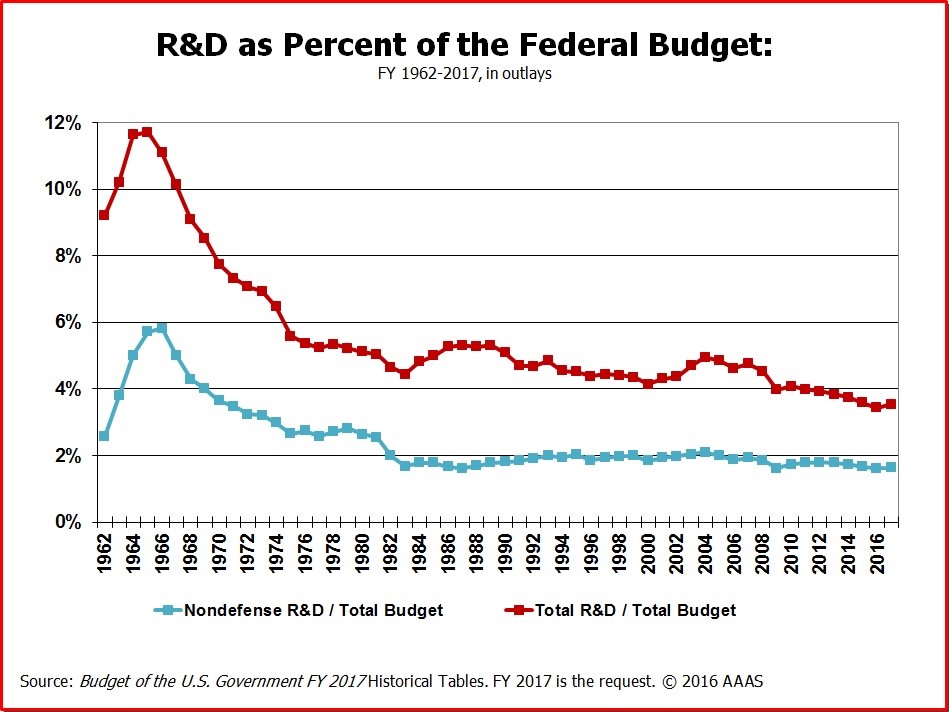 10.How to Get More Done When You Know Your Values, Value, and Vision

Most people fail to get stuff done, not because they don’t have morning routines and
rituals or even a lot of self-discipline.

You’re going to hear my friend, Vince DelMonte, turn the tables on me and grill me about how to create a champion mindset in every area of your life.

You must learn to say NO to what does NOT matter.

And the great thing is that you can do so easily and effortlessly: This is all part of the
Champion Mindset System.

The Champion Mindset requires you to know your 3-V’s.

I’ve been a fitness brand for 10 years but finally making the transition from “career
to calling” with your guidance, encouragement and embracing my value, values, and
my vision for helping men with the 5 mans of manhood – we can’t just leave fitness
in the gym.

I don’t care what’s on your skin, I care about what’s beneath your skin.

Matt Smith told me a powerful line in Denver: the most important question you
must ask every MINUTE of the day “What must I stop doing?”

The next time a new opportunity comes your way, ask yourself:

How would knowing the 3-V’s make the path to success smoother in your life?