1. History of Rising and Falling Rates

Ben Carlson If you look at the historical data, rising or falling interest rates don’t have nearly as much of an impact on stock market performance as you would think: 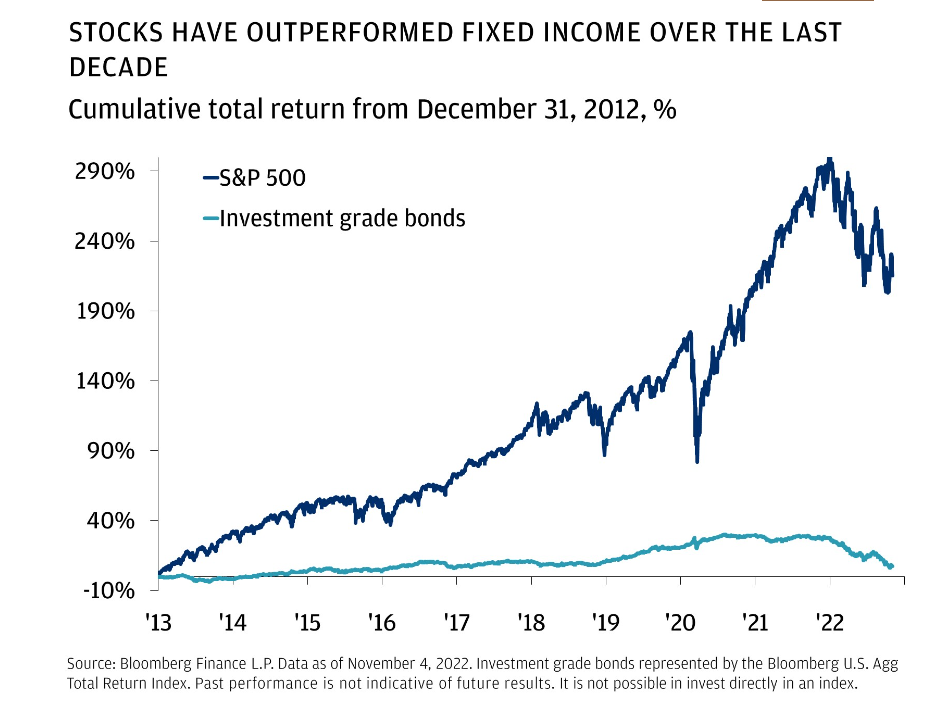 What is SOFR? The Secured Overnight Financing Rate (SOFR) is intended to replace the US dollar London Interbank Rate (US LIBOR) in future financial contracts. SOFR was selected by the Alternative Reference Rates Committee (ARRC) chaired by the New York Federal Reserve in 2017.

SOFR is the average rate at which institutions can borrow US dollars overnight while posting US Treasury bonds as collateral. Similar to a mortgage rate, SOFR is a secured borrowing rate in the sense that collateral is provided in order to borrow cash. SOFR differs from US LIBOR in that the latter is a rate for unsecured borrowing (where no collateral is posted).

Major central banks globally have taken on similar reforms to replace their US LIBOR equivalents with more reliable rates. 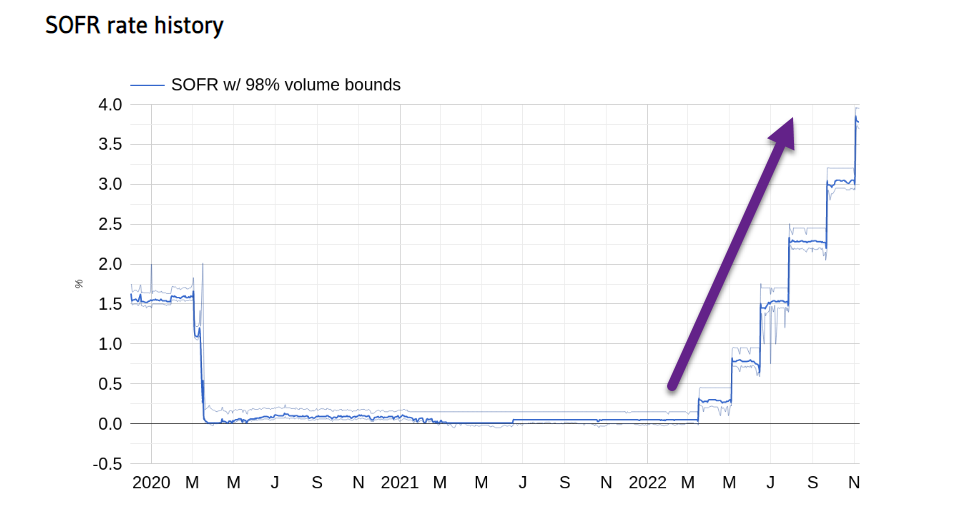 The below charts from Battery Ventures sheds light on why household name tech companies are trimming the fat — and how many are doing so.

Chart 1: Valuation has compressed across software stocks as interest rates have risen. 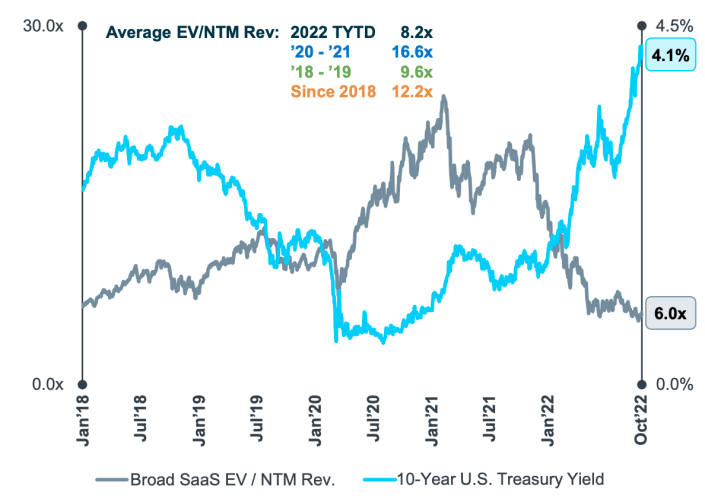 Salesforce.com -54%…50day thru 200day to downside on weekly chart 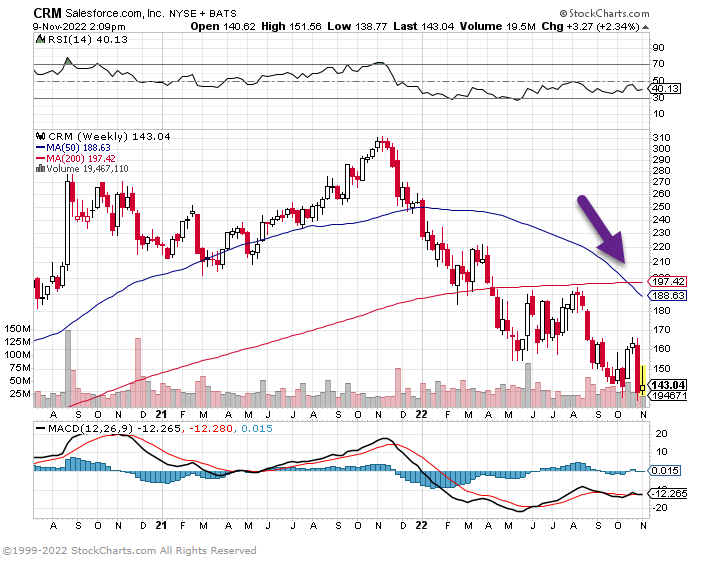 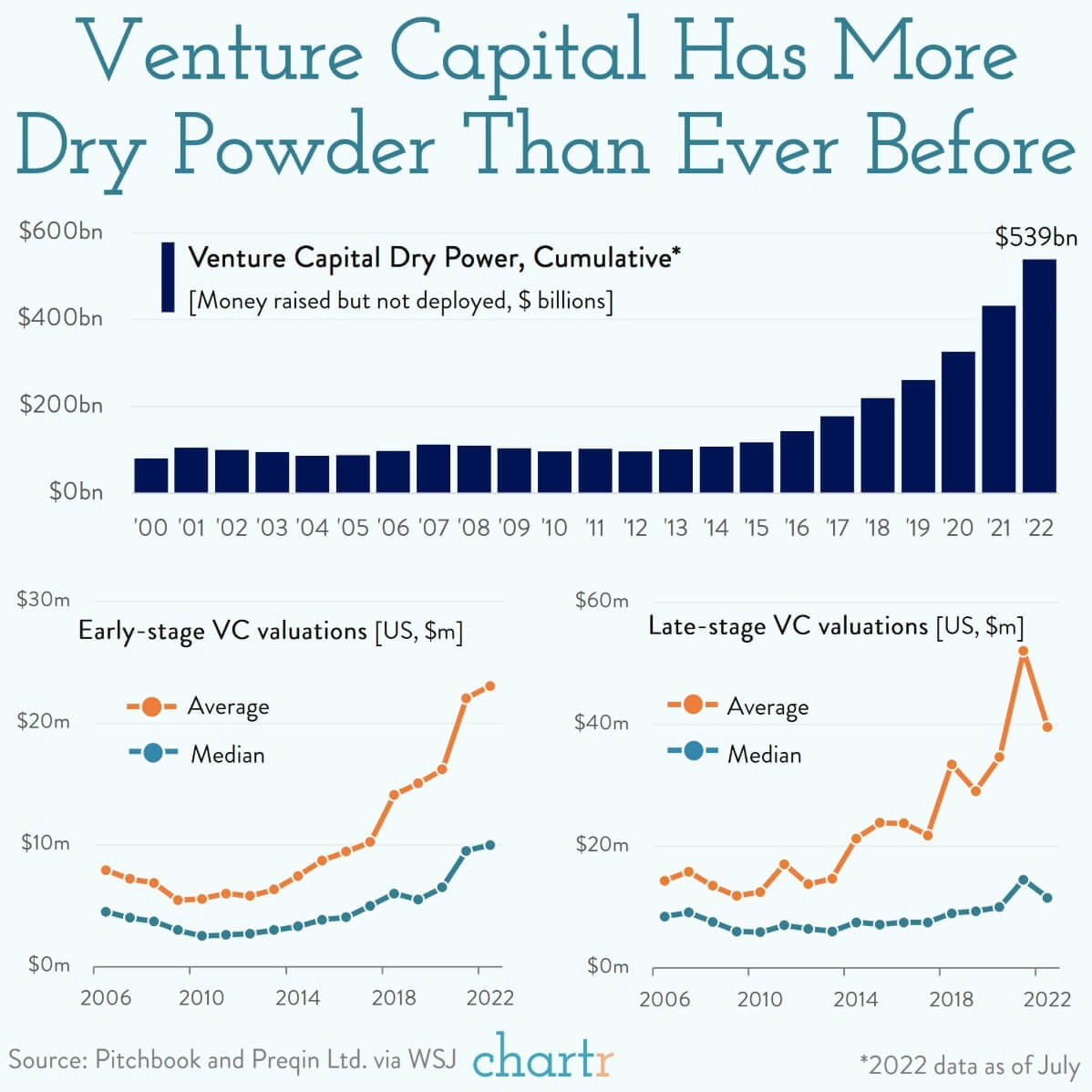 6. Microstrategy the CEO who Loaded Up on Bitcoin 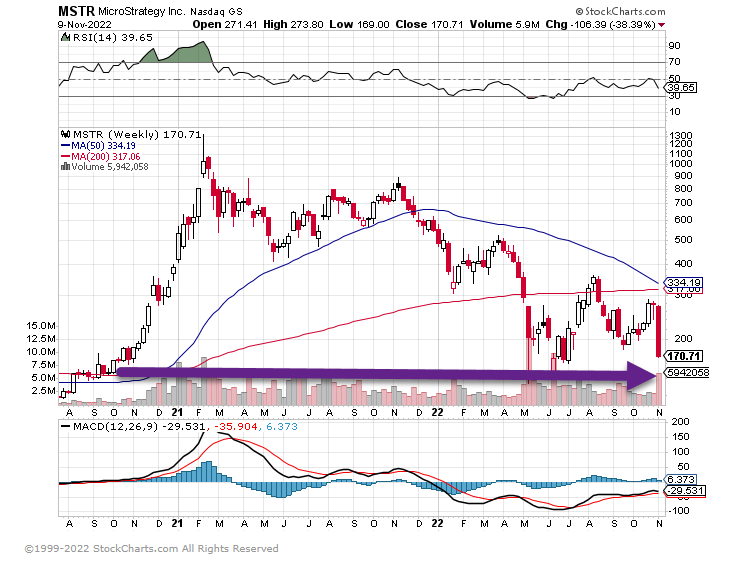 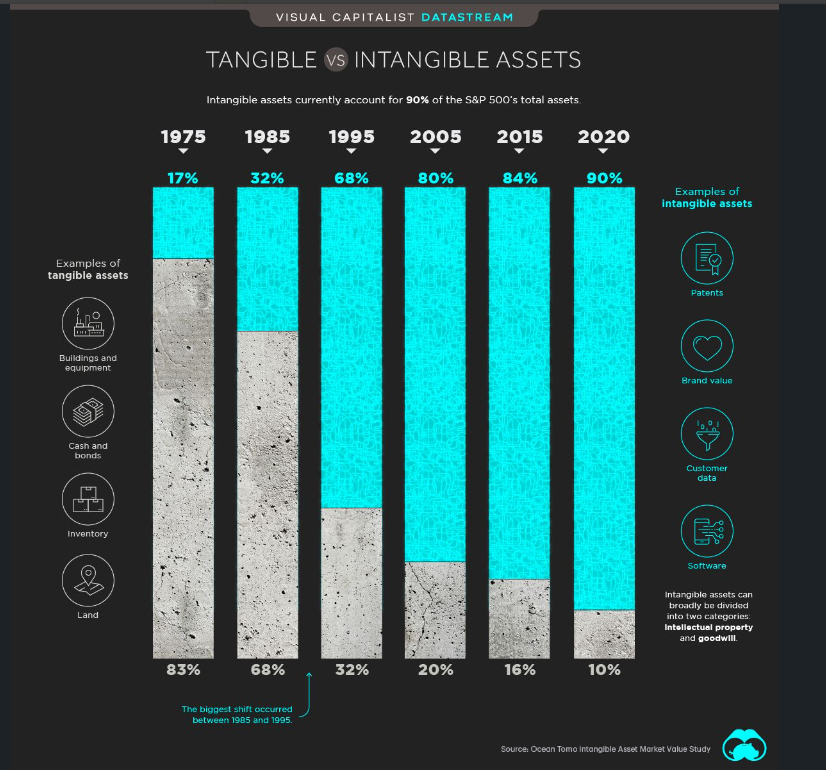 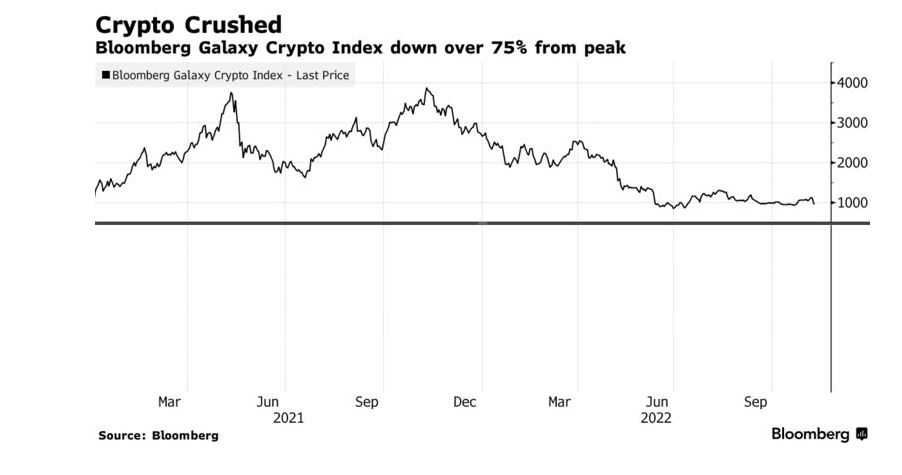 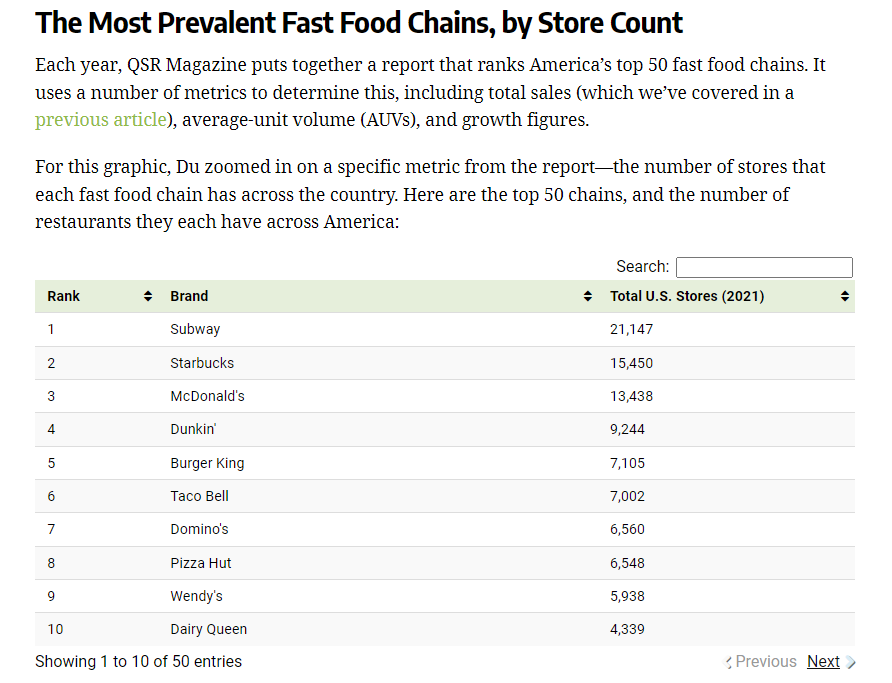 10. How Great Leaders Use the 3 Laws of Influence to Be Remarkably Persuasive, Backed by Considerable Science

Science reveals how to make facts, logic, and reasoning even more convincing.

He could convince us to change shifts, change roles, work in other departments… when he asked, we did it.

That seems odd, looking back. Factory floors are rarely hotbeds of supervisor/employee cooperation. Implementing any change usually takes time, with compromise typically skewed heavily towards take, not give.

Plus, as the best-performing crew in the plant we were great to be the supervisor of — anyone put in charge of us would automatically receive outstanding performance evaluations — yet really hard to actually supervise: We knew what we were doing, and treated bosses accordingly.

Some people are unusually persuasive. They influence — in a good way — the people around them. They make people feel a part of something bigger than themselves.

In fact, almost every successful person I know is extremely good at persuading other people. Not through manipulation or pressure, but by describing the logic and benefits of an idea to gain agreement.

And by taking advantage of a little science.

The Law of Timing

Ron was a classic morning person, and whether purposefully or intuitively, he nearly always proposed a change or sought agreement and buy-in within the first couple hours of a shift.

He also knew his audience. Our crew was made up of morning people, and it didn’t take a neuroscientist — or a chronotype survey — to determine our collective tendency. We all got to work before the shift started to get a jump on the day. When given the choice between coming in early to work overtime or staying later, we always chose to come in early.

The same held true for night owls; the same speaker was judged to be significantly more charismatic when viewed in the afternoon or evening than in the morning.

While it’s unlikely they’re all either larks or night owls, odds are more fall in one camp than the other. Then do your best to line up your tendency with theirs.

The Law of Speed

According to a study published in Journal of Personality and Social Psychology, people who talk at a relatively fast rate are generally perceived to be more credible and intelligent than people who speak more slowly.

Since speed implies certainty — and Ron was usually nothing if not certain — talking fast often made him more persuasive.

But not always. As with any communication, the nature of your audience also matters. According to a study published in Personality and Social Psychology Bulletin:

When Ron thought we would be skeptical, he was fairly rapid-fire. But when he knew we were likely to agree, he slowed down. He gave us time to nod our heads. To say to ourselves, “Yep, that makes sense, and here’s why.”

Because he knew that what mattered most was how we received his message.

Not the way he wanted, through habit or intention, to deliver it.

The Law of Volume

I know what you’re thinking: Facts, logic, and reasoning should win the day — not seemingly manipulative strategies like considering the time of day or adjusting your rate of speech.

But if you truly believe in your decision, idea, or proposal, it only makes sense to do everything you can to help you persuade others to join you.

And besides: People don’t mind a little “manipulation.” As the authors of a 2019 study published by the American Psychological Association write:

Rather than being effective because they go undetected, however, the results suggest a subtler possibility. Even when they are detected, paralinguistic attempts succeed because they make communicators seem more confident without undermining their perceived sincerity. Consequently, speakers’ confident vocal demeanor persuades others by serving as a signal that they more strongly endorse the stance they take in their message.

Further, we find that paralinguistic approaches to persuasion can be uniquely effective even when linguistic ones are not. A cross-study exploratory analysis and replication experiment reveal that communicators tend to speak louder and vary their volume during paralinguistic persuasion attempts, both of which signal confidence and, in turn, facilitate persuasion.

Even if people know you’re doing it on purpose.

Take Ron. I still remember the time he wanted us to work two months of night shift in a row rather than one. When he listed the objective reasons why the change made sense — WIP leveling, utilizing open equipment, component timing, etc. — he spoke fairly loudly. He had total command of the facts, and he showed it.

But when he talked about the impact on us, he spoke so softly we had to lean forward to hear him. “Look,” he said. “I know this is a lot to ask. Doing two months of nights will suck. I wish there was another option. But we’re in a bind, and we need you. Be honest, there’s a lot of pressure on me to make this happen, so I need you, too.”

Did we feel manipulated? A little, maybe. But we didn’t care. We knew the situation. Just as importantly, we trusted Ron. We knew he needed to convince us, and we were OK with that.

Because persuading and convincing isn’t a game to be won or lost. The best outcome is when both sides agree because they genuinely agree, not because one side feels pushed or forced.

So make sure you use your powers of persuasion to help people objectively understand why they should be convinced. Do that, and they are much more likely to persuade themselves, which means their agreement will result not just in buy-in, but also in action.

It’s just a lot of talk.