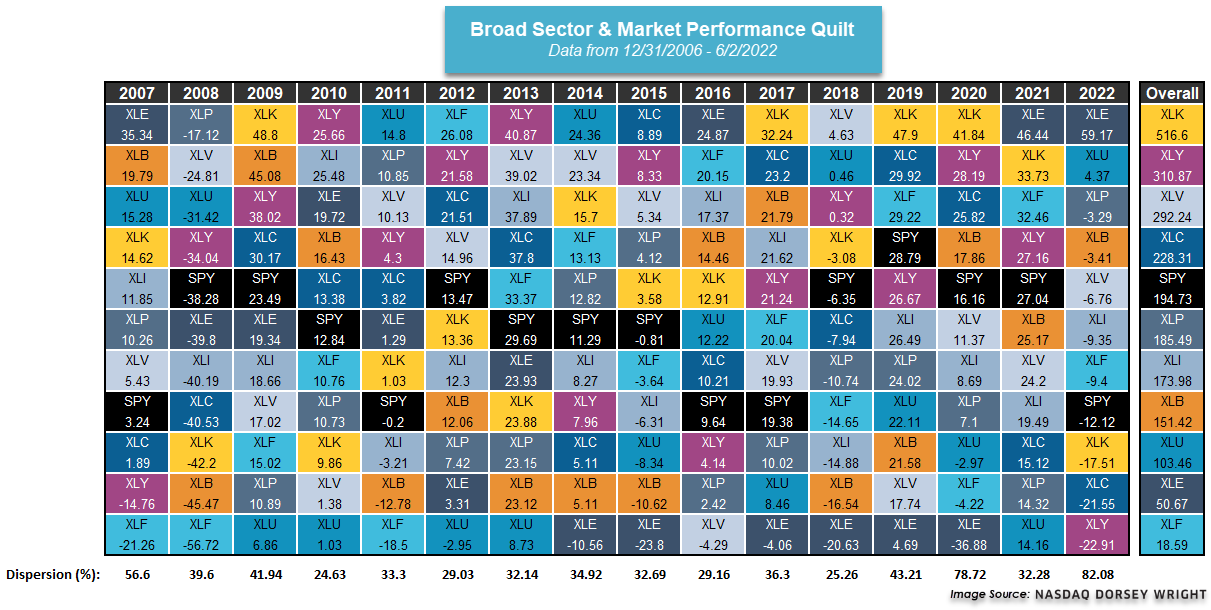 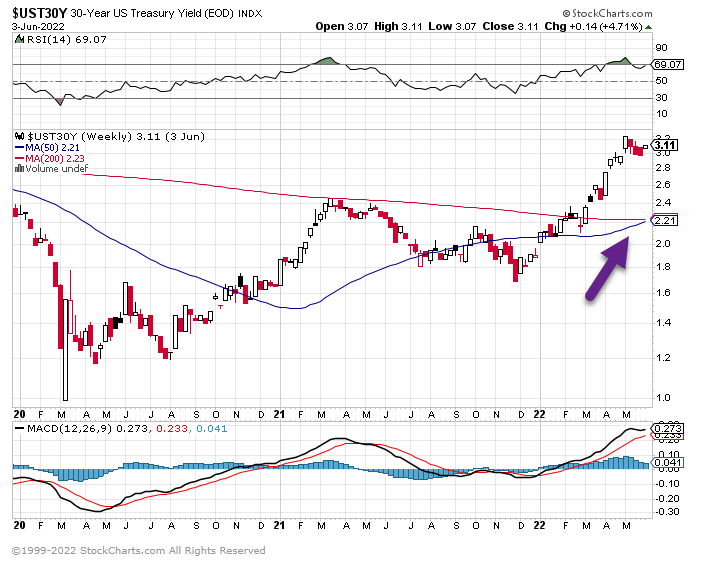 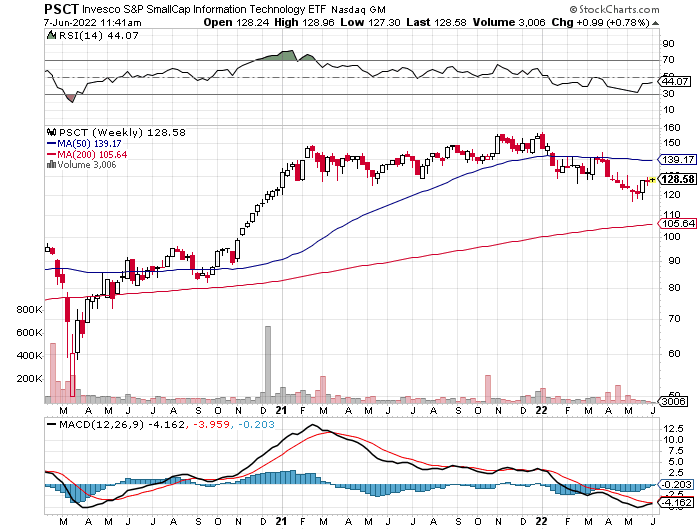 4. Under Armour Another Full Round Robin Stock Back to Covid Lows 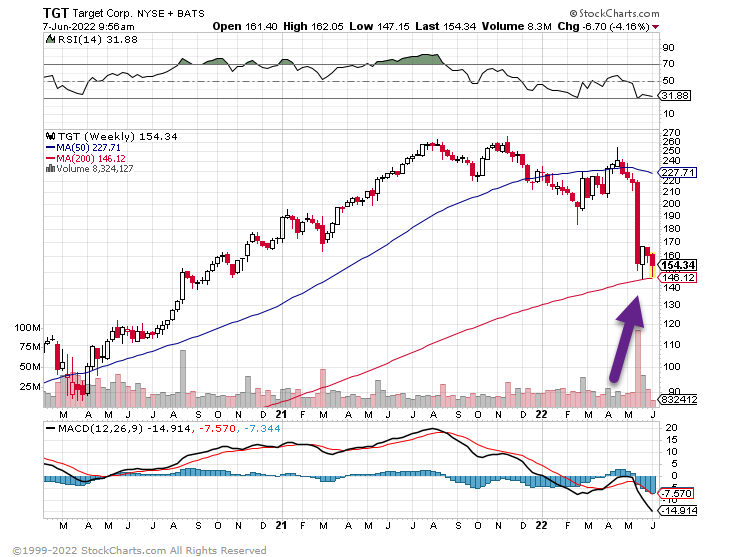 The broader retail space has been weak relative to the S&P 500 so far this year. Much of this weakness came after Target’s (TGT) and Walmart’s (WMT) earnings calls, in which management noted margin compression, inventory gluts in certain categories, shifting consumer preferences, and weakness in consumer spending as inflation in food and energy reduces discretionary budgets. Institutional subscribers can view our Conference Call Recaps on these two companies by clicking here. On a YTD basis, the VanEck Retail ETF (RTH) has underperformed the S&P 500 (SPY) by 4.5 percentage points, trading down by 18.2% as of today. A chart of the relative strength of RTH vs SPY over the last year is shown below. 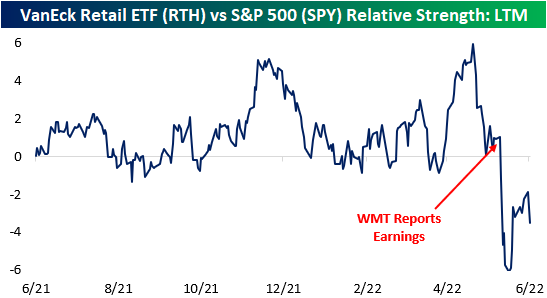 Within the S&P 500, there are 21 stocks that make up the Retailing industry, and in the table below, we have outlined the performance of the 10 largest stocks by market cap.  You’ll notice that companies like Costco (COST) and WMT aren’t listed, but that’s because they are actually part of the Food and Staples Retailing industry.  As you can see, seven of these ten stocks are down more than the average S&P 500 member on a YTD basis, and six are further from their respective 52-week highs than the average S&P 500 member. However, only two of these stocks are below their pre-COVID highs, whereas more than a third of (35.8%) of S&P 500 components are below their pre-COVID highs. 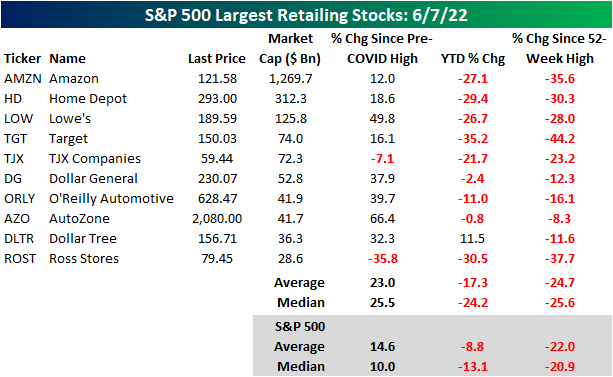 Zerohedge-Here are the shocking numbers: in April one month after the jarring March print again came in more than double the $25 billion expected to $52.435 billion, in April consumer credit again exploded to a ridiculous $38.1 billion, again blowing away expectations of a $35 billion increase (and not much lower than last month’s downward revised $47.3 billion). 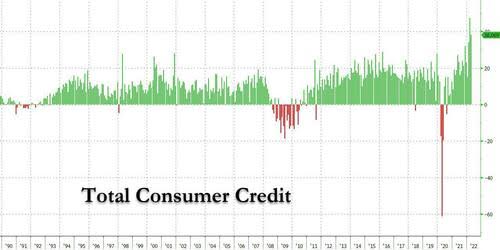 From The Daily Shot Blog  Food for Thought: Lastly, let’s take a look at US exports of goods by state. 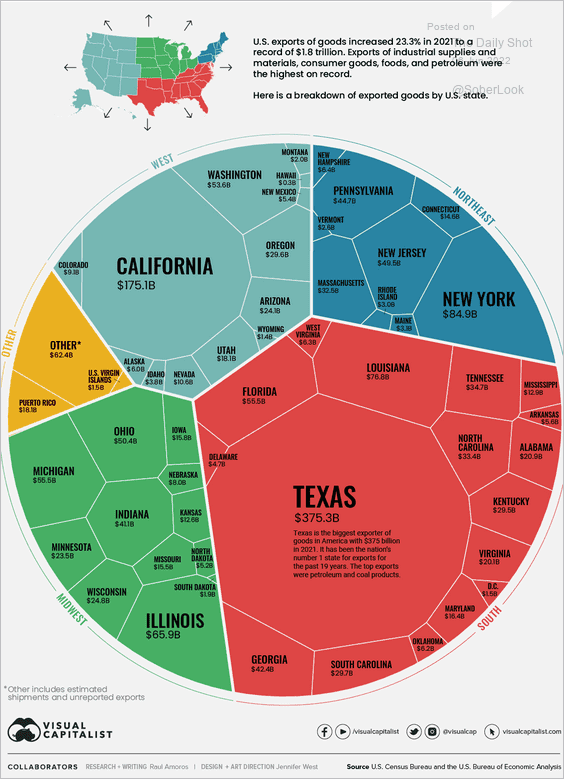 NY TIMES A new survey reveals that nearly three-quarters of Americans place owning a home above career, family and college as a sign of prosperityBy Gregory Schmidt

Nearly three-quarters of Americans say owning a home is a higher measure of achievement than having a successful career, raising a family or earning a college degree, according to a new survey. But affordability remains a challenge for many of them.

The survey, released in March for Bankrate.com, a financial services company, found that 74 percent of respondents ranked homeownership as the highest gauge of prosperity, above having a career (60 percent), children (40 percent) and a college education (35 percent).

The survey, conducted by the market research firm YouGov, comprised 2,529 adults, 1,397 of whom were homeowners. Of those respondents who did not own homes, about two-thirds pointed to one or more affordability factors for holding them back, including income level, soaring housing prices and their ability to make a down payment.

Other factors included poor credit, not being ready for homeownership and high mortgage rates. Fourteen percent said they were not inclined to be homeowners, regardless of the circumstances.

To find more affordable housing, 58 percent of all respondents said they would be willing to make compromises, including moving to another state, buying a fixer-upper or moving to a less desirable area.

Those results skewed toward younger Americans, said Jeff Ostrowski, a senior reporter at Bankrate.com who covers the housing market and mortgages. “Boomers and Gen X have built up equity, so there was a smaller percentage of older people willing to make concessions,” he said.

But he added that there were still affordable homes to be found, particularly in cities in the Midwest and Northeast like Cincinnati, Cleveland, Detroit, Indianapolis, Pittsburgh and St. Louis. “In all of those places, the median home prices are $300,000 or less,” he said.

Despite the rise of remote work, which has accelerated the migration from expensive coastal cities to more affordable inland housing markets, a majority of homeowners in the survey were satisfied with their choice: Seventy-two percent said they would buy their current home again.

10. The purpose is to become the kind of person that can do it

The Daily Stoic —In one of his letters, Seneca describes himself as a “cold-water enthusiast.” He would “celebrate the new year by taking a plunge into the canal, who, just as naturally as I would set out to do some reading or writing, or to compose a speech, used to inaugurate the first of the year with a plunge into the Virgo aqueduct [present day Trevi Fountain].” But then he gives the real reason for his cold plunges: “The body should be treated more rigorously that it may not be disobedient to the mind.”

There’s a lot of interesting research about the health benefits of taking cold showers and going for a run and lifting weights. But the real reason to do these things is far more simple: it’s to make a statement about who is in charge.

We challenge ourselves not to improve our immune system. Not to increase our metabolism. Not to reduce anxiety. Those things might be nice ancillary benefits but they are not the point. The purpose is to become the kind of person that can do it. How do you expect to do the big things that scare you—that scare others—if you haven’t practiced them? Why do you think you can endure the cold reception of a bold idea if you can’t even endure cold water? How can you trust that you’ll step forward when the stakes are high when you regularly don’t do that when the stakes are low? What gives you any confidence you’ll do the hard thing when people are watching if you can’t do that even when no one is watching?