1. Energy Stocks are Still at Record Cheapness vs. Tech 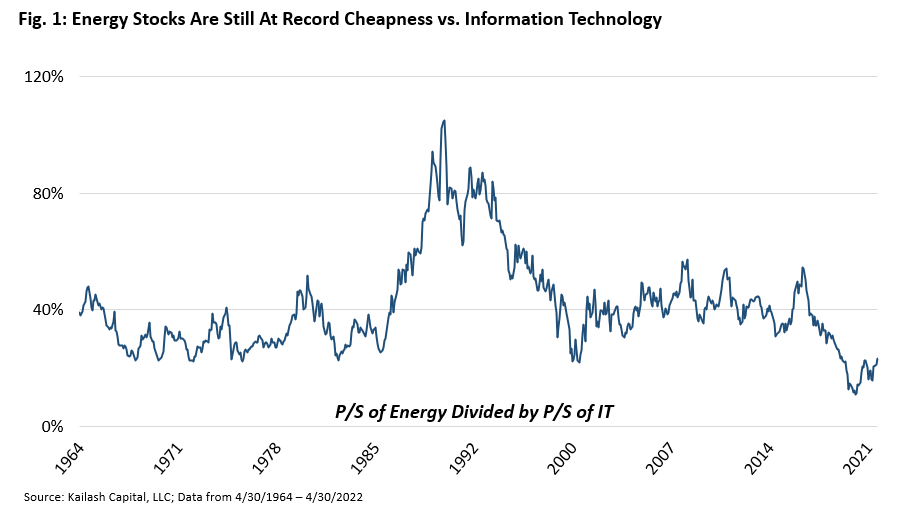 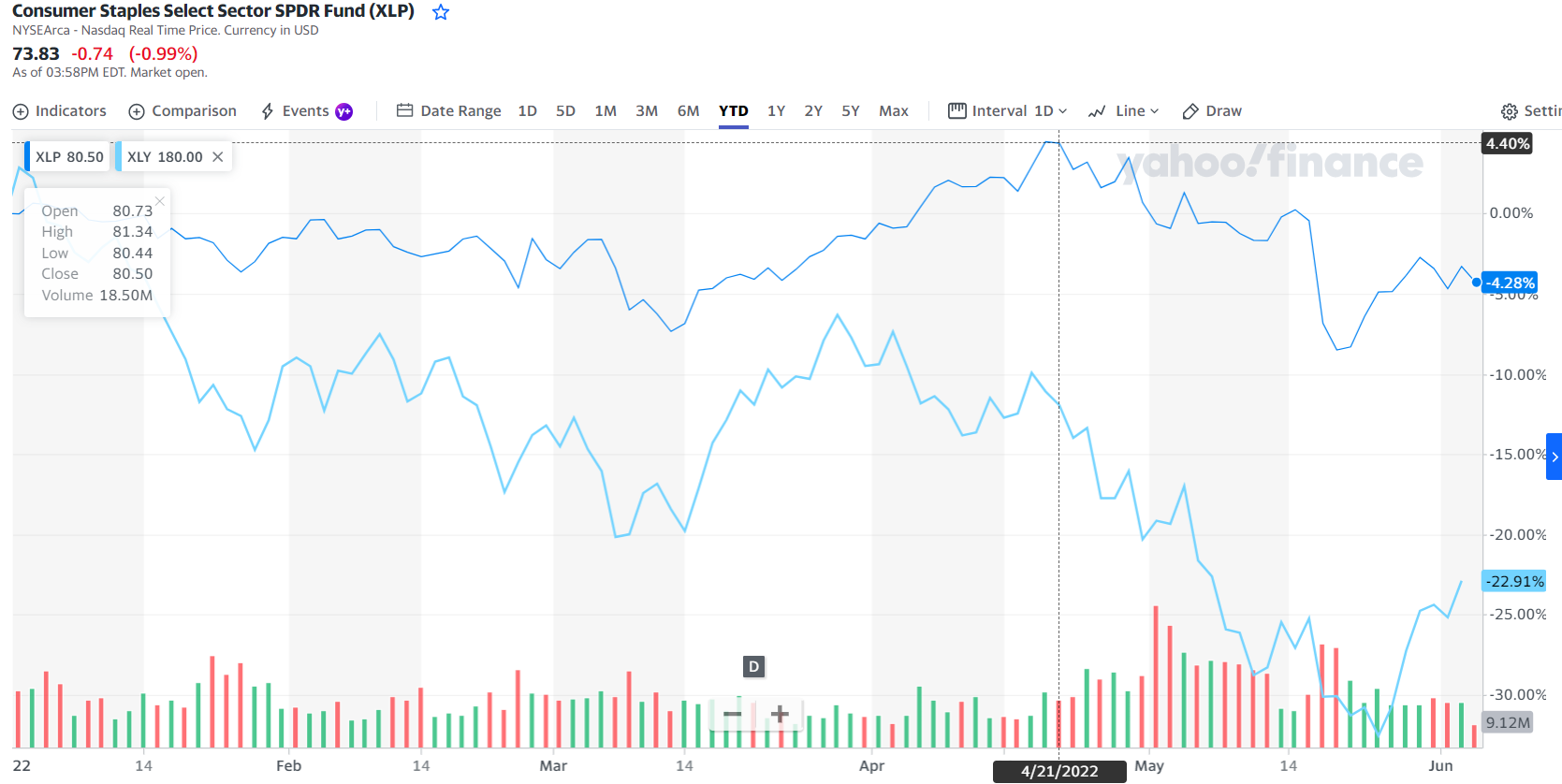 WSJ-Developers backed by the central or local governments have dominated land auctions around the country in recent months, thanks in part to their continued access to affordable financing. While they are also contending with slumping apartment sales and falling home prices, their sales drops have generally been less severe than those of their peers not backed by the state. 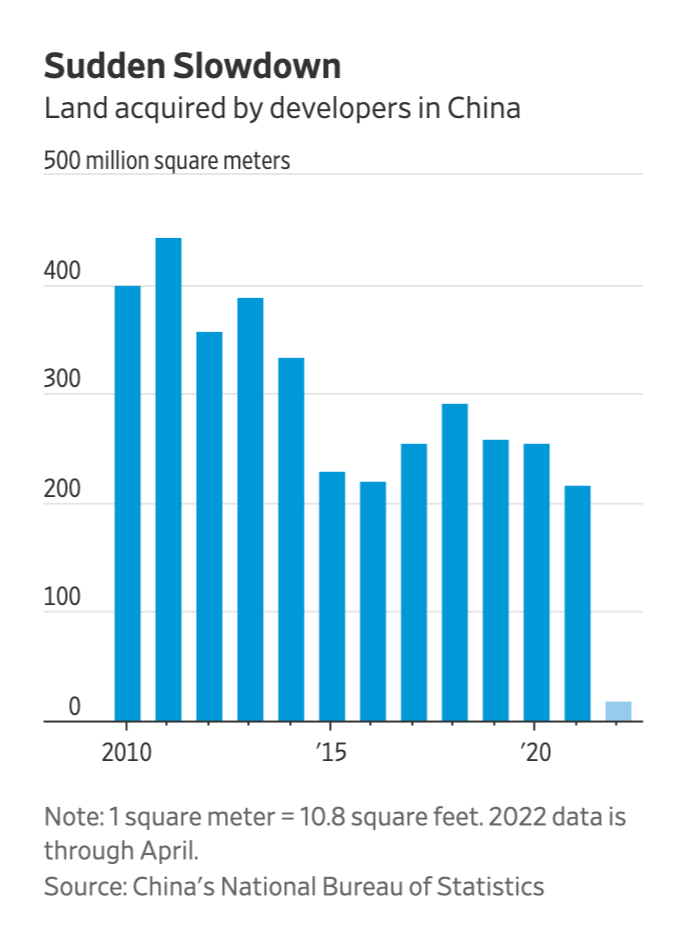 4. Interesting Chart to Watch as the FED Unwinds Balance Sheet 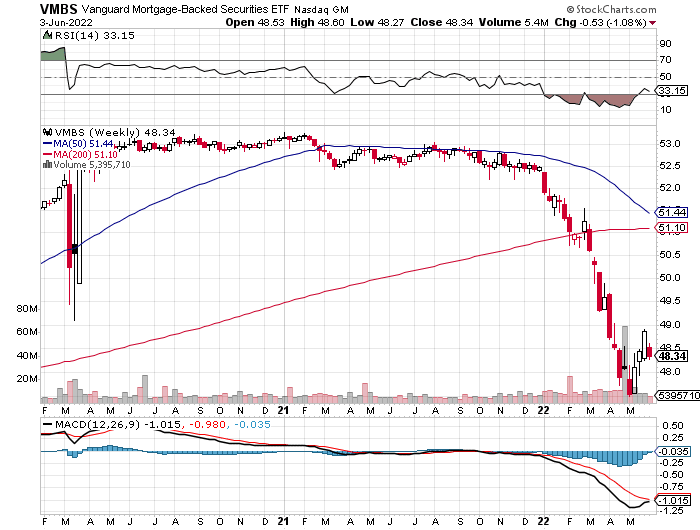 VMBS has a negative 5 year performance 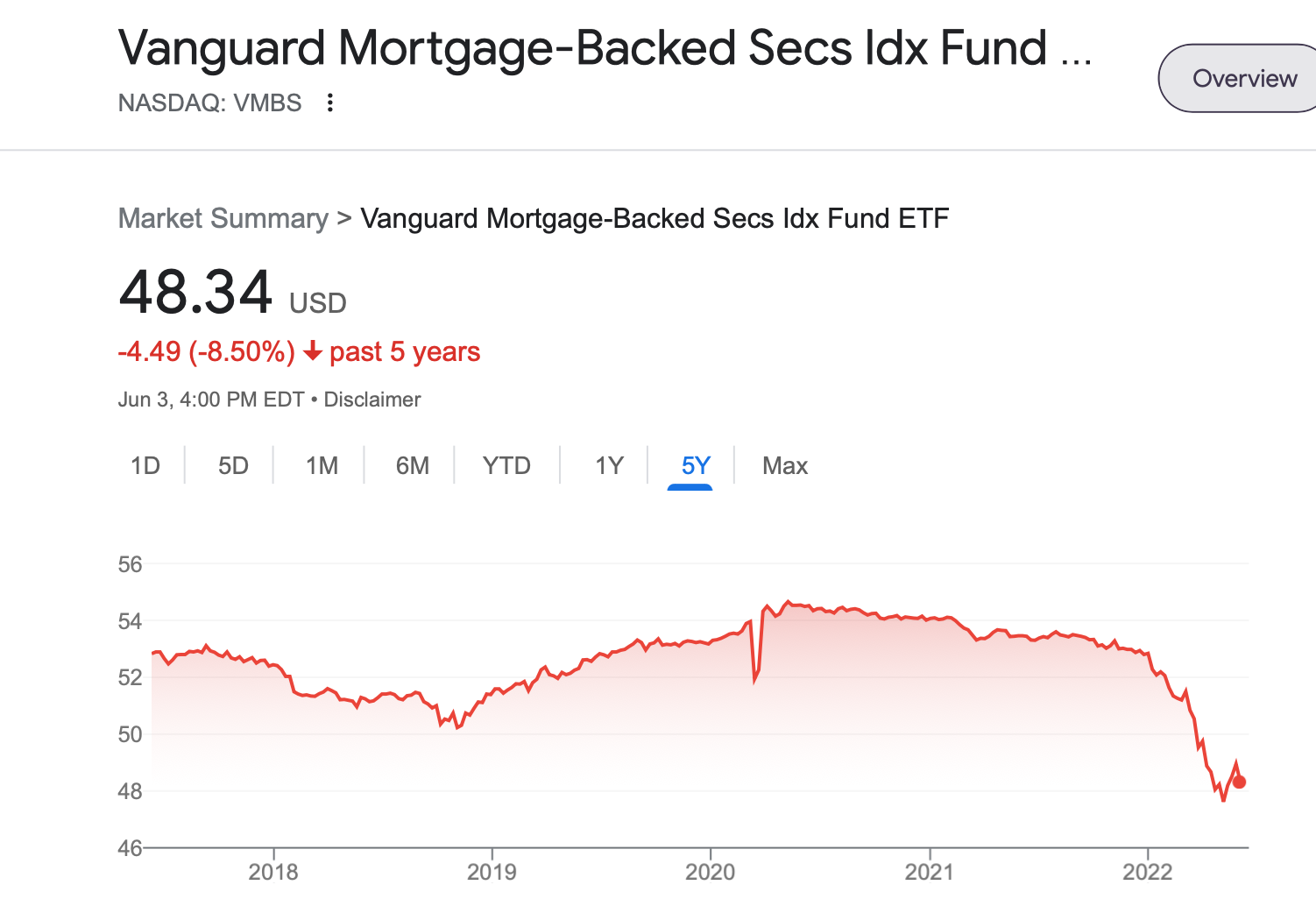 5. According to WSJ-Factory Robotics Orders Jumped 40% Year Over Year in Q1 2022 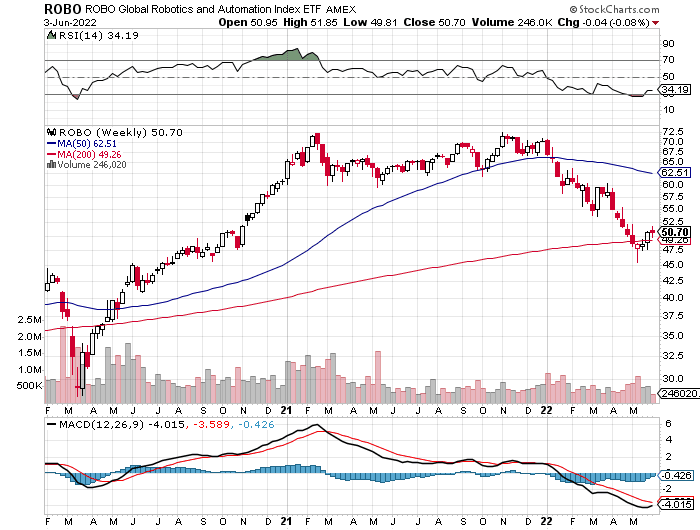 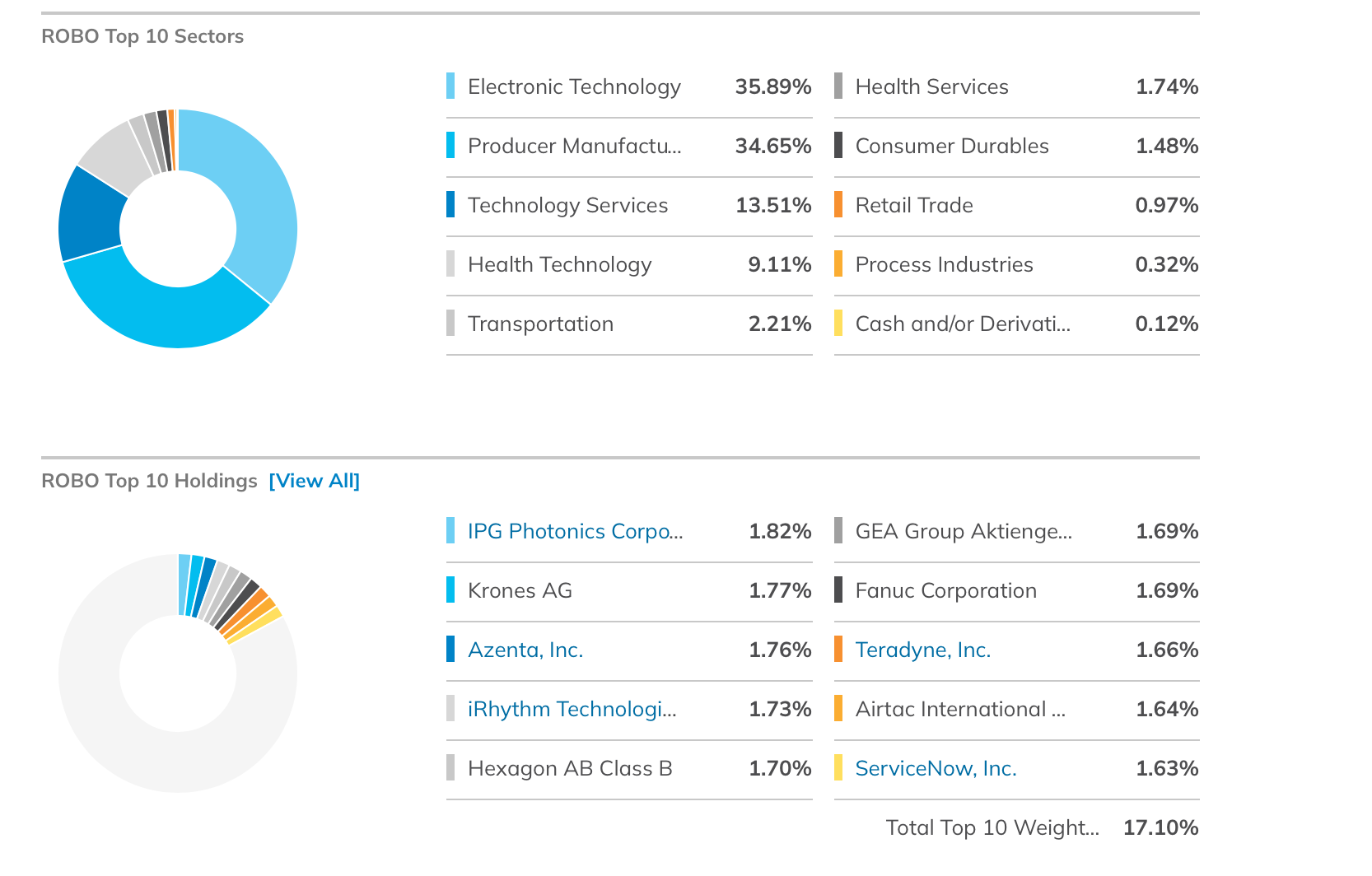 6. Airbnb…Airlines Back to Pre-Covid Bookings

ABNB -50% Correction…Forming Base in Chart 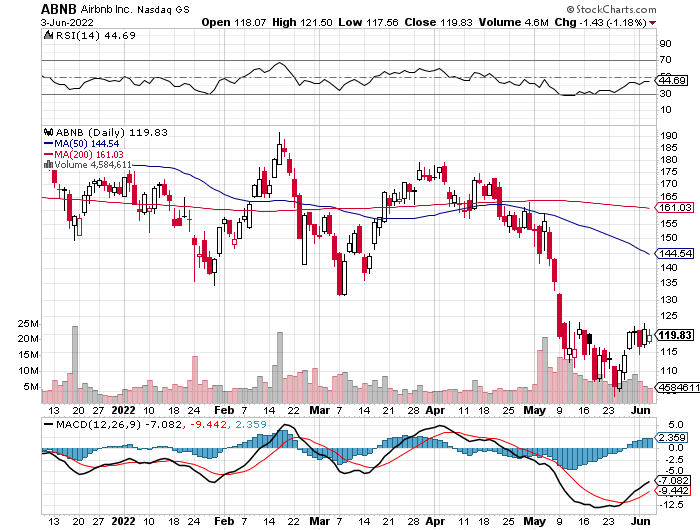 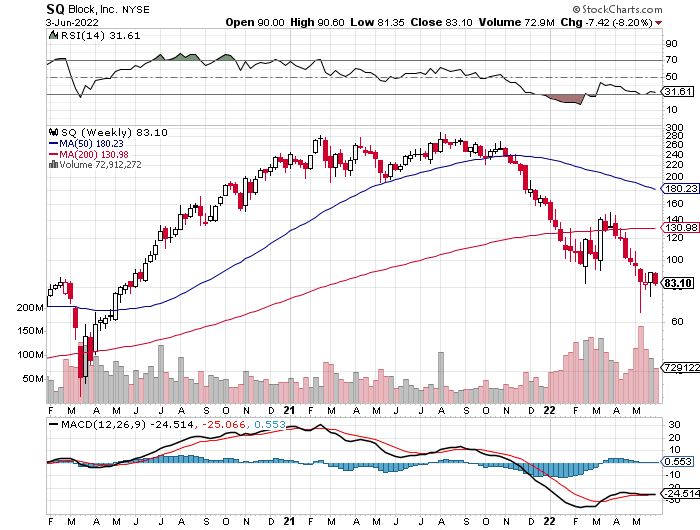 The Marshall Project– For homicide detectives, 2020 brought good news and bad news. On the one hand, police across the nation solved more murders — in absolute numbers — than in any year since 1997, according to data reported to the FBI. On the other hand, because new homicides increased sharply, the reported rate at which killings were solved, known as the “clearance rate,” declined to a little below 50%.

The lower clearance rate in 2020 was an extension of a long, steady drop since the early 1980s, when police cleared about 70% of all homicides, and a decline that experts say was exacerbated by the pandemic. (The FBI won’t release 2021 numbers until later this year.

As Murders Spiked, Police Solved About Half in 2020The U.S. homicide clearance rate is at a historic low. Here’s what that means. By WEIHUA LI and JAMILES LARTEY

9. The Uyghurs in China now live in a giant, open air prison camp 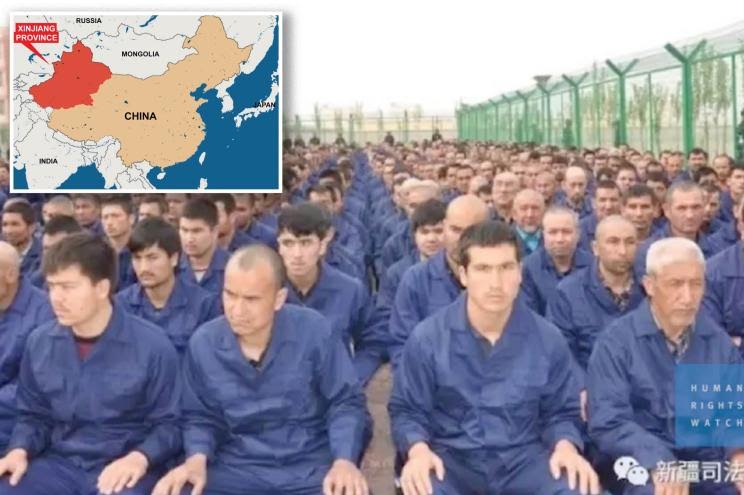 An estimated 2 million Uyghurs are interred in detention camps in the far-northern Chinese province of Xinjiang. Along being forced to renounce their Muslim faith, the Uyghurs are subject to grave human-rights abuses including torture and sexual exploitation. NY Post photo composite

There’s a cultural genocide taking place in China right now against the nation’s Uyghur minority. Aggressively monitored by Chinese authorities and faced with the constant threat of arrest or torture, this Turkish-speaking people in China’s Far West now exist in the world’s first, real-life, digital dictatorship.

It is no exaggeration to say the entire province of Xinjiang, an area only slightly smaller than Alaska, has been turned into a giant, open-air prison camp by the Chinese Communist Party. As author Nury Turkel explains in his new book, “No Escape: The True Story of China’s Genocide of the Uyghurs,” every neighborhood in Uyghur cities large and small now has its own hastily erected “convenience police station” manned by “low-level assistant police officers, who are more brute muscle than actual law enforcement officers.” The neighborhoods themselves are surrounded by manned check points, where those who want to leave are forced to squint into a camera for a retinal scan before departure.

Each neighborhood is further broken down into small “grids” of 15 to 20 families, each with an assigned a “grid monitor.” As the author writes, each monitor is tasked with snooping on their neighbors, reporting any suspicious or forbidden activities — such as Islamic practices like refusing to eat pork or fasting during Ramadan — to the authorities.

Then there are the Monday-morning flag-raising ceremonies, at which attendance is obligatory.  As the red flag of communist China is raised, writes Turkel, who’s ethnic Uyghur, Party officials “lead chanted slogans about the greatness of the party and its secretary-general, Xi Jinping, and the need for Uyghurs to abandon their faith in anyone but him.”

10. Where Should You Focus?

Everyone knows that focus matters. Most people don’t know where to focus. Telling people “to focus more” is about as helpful as telling them to “make better decisions.” Common advice but useless in practice.

Not all focus is equal. Some focus is asymmetric. Knowing where to focus makes a difference.

How do you know where to focus? The answer is a deep fluency in the problem. You need to embed yourself in the problem and the details. You need to try things, reflect, and learn. Sooner or later, you start to understand the hidden asymmetry.

A lot of business people treat all decisions the same, no matter the implications. They’ll spend as much time trying to decide a trivial decision as a major one. A lot of authors focus on the work and miss that how it’s positioned for the audience matters more. A lot of people go to the gym 4 days a week only to miss that what goes into their body and the amount of sleep matter more.

In any field, a few areas of focus make an asymmetric difference. Often they’re hiding in plain sight and ignored by most.

One place to find asymmetry is to listen to people talk about others’ success … “that book sold a lot, but did you read it, it’s not well written.” That’s an indication that the quality of writing matters less than you think and something else matters more. Or consider the person that explains another person’s success away with “luck.” There might be an element of luck to it, sure, but when you pull back the curtain, I bet you discover they’re focusing a little bit more on something different. Success leaves clues.

What looks like a lack of focus is often a lack of understanding.