The 2-year Treasury yield popped Wednesday while its 10-year counterpart fell, pushing the so-called inversion between the two to its biggest level since 2000. Yield-curve inversions are seen by many on Wall Street as signals that a recession lies on the horizon.

The 2-year, which is more sensitive to changes in monetary policy, traded more than 9 basis points higher at around 3.138%. The benchmark 10-year rate, meanwhile, slid nearly 4 basis points to 2.919%. Yields move inversely to prices, and a basis point is equal to 0.01%.

Those moves came after the U.S. government said after the consumer price index rose 9.1% on a year-over-year basis in June. That’s well above a Dow Jones estimate of 8.8% and marked the fastest pace for inflation since November 1981. It also added to worries of even tighter monetary policy from the Federal Reserve. 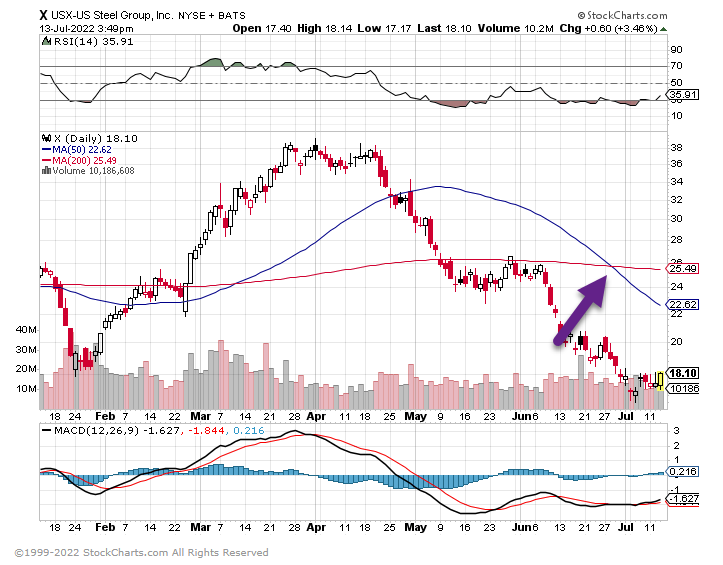 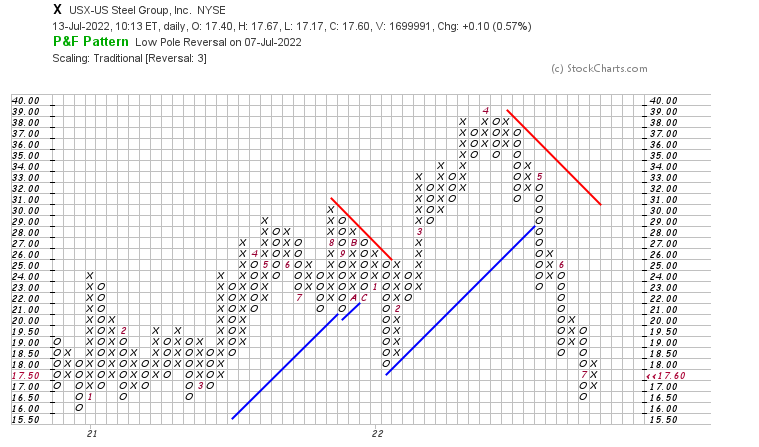 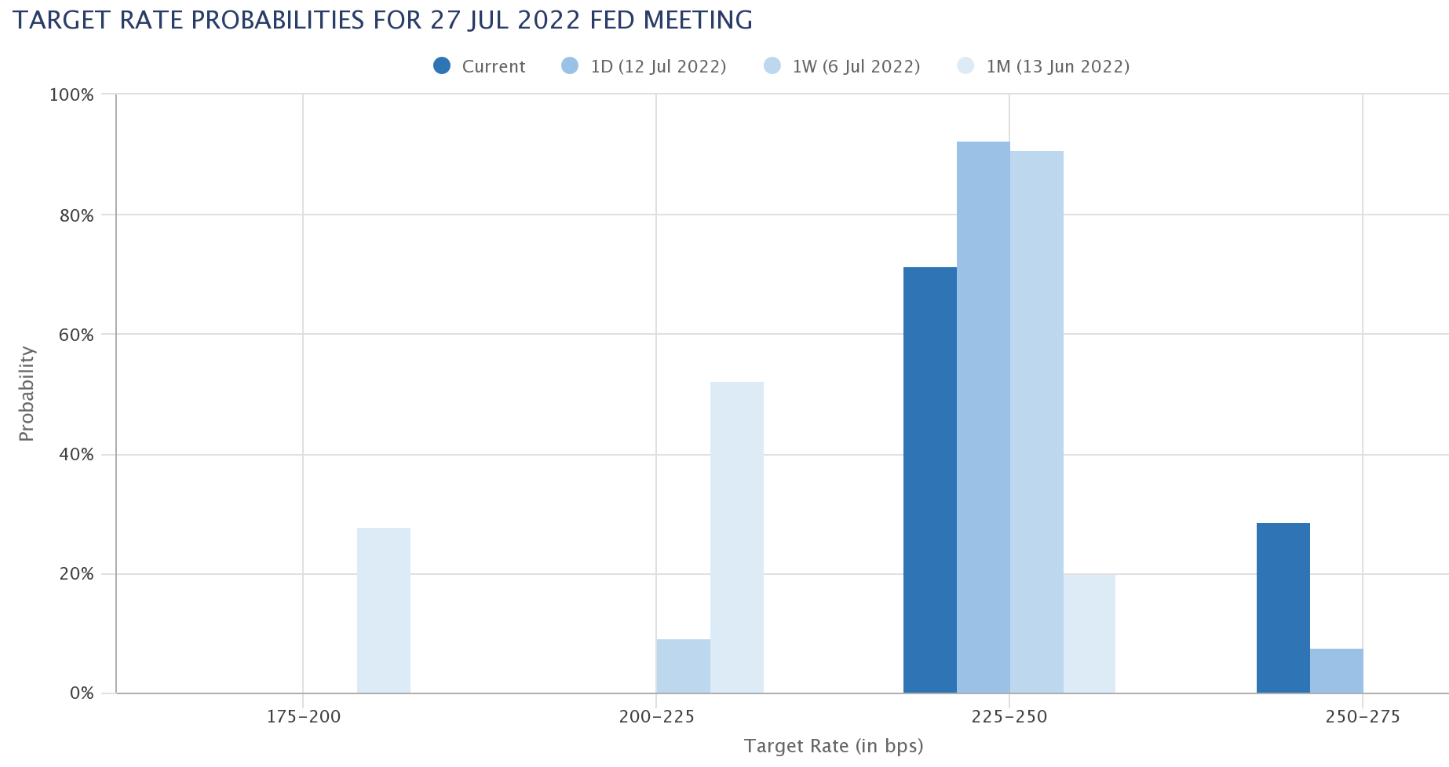 Liz Ann Sonders Schwab-Breakeven rates descending quickly over past 3 months … drop in 1y, 5y, and 10y is steepest since summer 2020 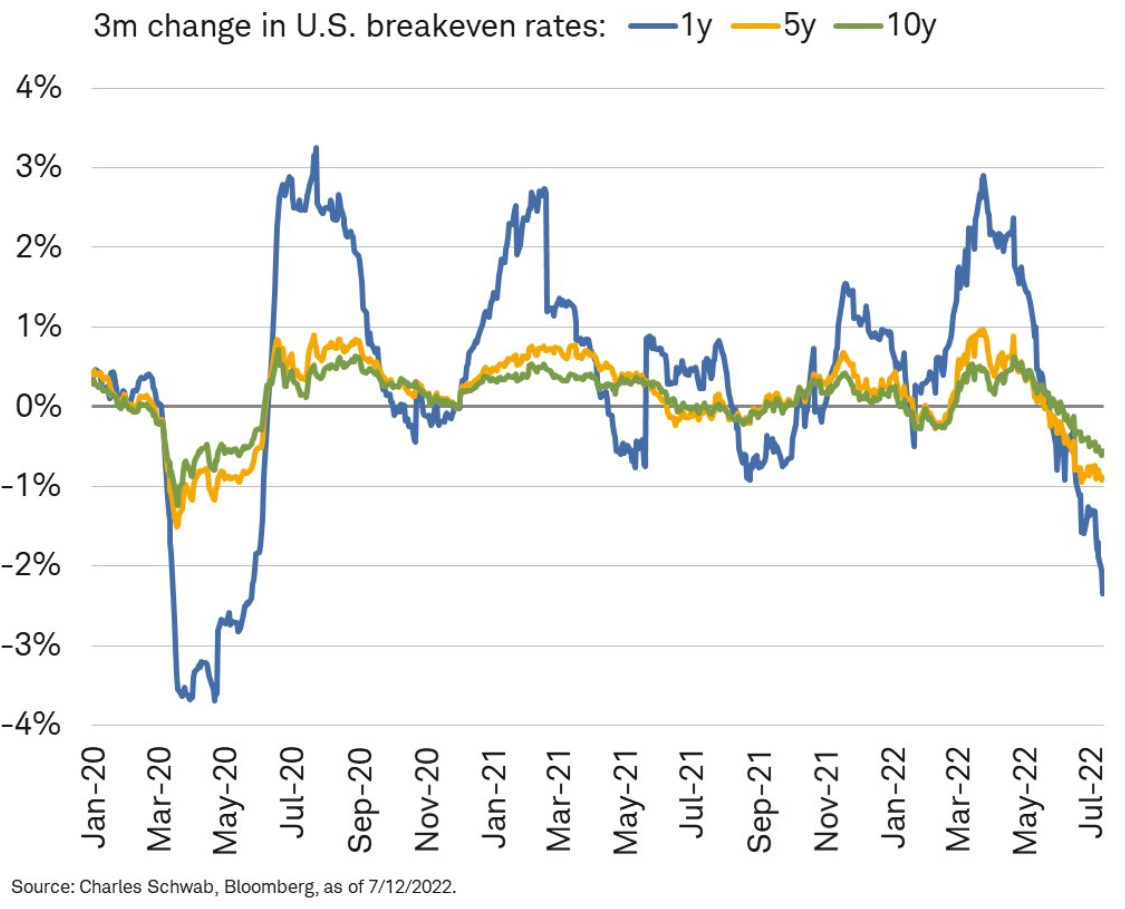 WSJ By Hannah Miao Companies are also using their cash to repurchase their own shares at record levels, with second-quarter buybacks expected to set a fresh high of $286.4 billion, according to S&P Dow Jones Indices.

CSD-Buyback ETF Clear Down Channel on Chart….broke uptrend line going back to end of 2019 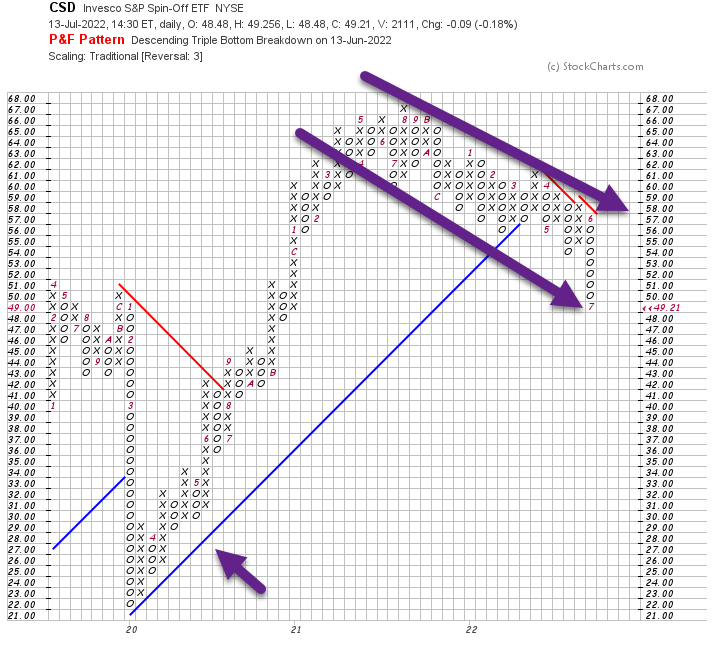 (Bloomberg) — Across China, homebuyers are refusing to pay mortgages as property developers drag on construction projects, escalating the country’s real estate crisis and risks of bad debt for banks.

Buyers of 35 projects across 22 cities have decided to stop paying mortgages as of July 12 due to project delays and a drop in real estate prices, Citigroup Inc. analysts led by Griffin Chan wrote in a research report distributed on Wednesday.

The payment refusals underscore how the storm engulfing China’s property sector is now affecting the country’s middle class, posing a threat to social stability. Chinese banks already grappling with challenges from liquidity stress among developers now also have to brace for homebuyer defaults.

Now is “a critical time for social stability,” said Chan, adding that “the forgoing of down payments may bring social instability.”

A drop in home values hasn’t helped. Average selling prices of properties in nearby projects in 2022 were on average 15% lower than purchase costs in the past three years, according to Citigroup’s research.

The contagion is spreading to banks. Non-performing loans triggered by the wave of mortgage payment snubs could reach as much as 561 billion yuan ($83 billion), about 1.4% of the outstanding mortgage balance, according to Chan.

While the overall impact on banks will be “manageable,” state lenders including China Construction Bank Corp., Postal Savings Bank of China Co. and Industrial & Commercial Bank of China Ltd. may have more exposure to mortgages, and could suffer setbacks amid dampened investor sentiment, Chan wrote.

For Chinese banks, the non-performing loan ratio of mortgages was well below the level of other forms of lending, according to the banking regulator. At China Construction Bank, only 0.2% of its residential mortgages were bad as of December, compared with 1.42% for total loans.

The latest development comes at a time when renewed risks of Covid restrictions also pose a threat to the industry. A key real estate index fell for a third day Wednesday, heading for the lowest level since March.

A Bloomberg index of China’s high-yield dollar bonds fell to the lowest in a decade as of Tuesday. Domestic bonds of large property developers, including Gemdale Corp. and Country Garden Holdings Co., also slumped to record lows.

9. Home Prices Slowdown but the U.S. is Still Under Built

While the cyclical story could continue to weigh on the Homebuilding sub-industry, long-term fundamentals remain strong. NDR estimates around a 2.5 million unit shortage in housing for 2022 due to persistent underbuilding since the GFC. 2/4

10. ‘They couldn’t even scream any more. They were just sobbing’: the amateur investors ruined by the crypto crash

The mania around bitcoin and other cryptocurrencies was fuelled by a social media hype machine unprecedented in the history of financial markets. Investors touted new coins that were amassing huge returns, hung off the tweets of crypto-influencers and spoke in impenetrable jargon. “Demand for bitcoin related purely to the level of interest in this new technology, and that interest was manipulated by the companies that offered different cryptocurrencies and exchanges and startups,” Yarovaya says. “All of this happened on social media, meaning that investors didn’t even know whether there was genuine interest in crypto, or lots of Twitter bots encouraging people to buy. The system wasn’t transparent.”

There are eight stages of crypto-crash grief.

Shock. “I couldn’t eat or sleep for two nights,” says Alla Driksne, a 34-year-old chef from London. “I got sick from the stress.” She has lost her life savings – a six-figure sum – in the Celsius freeze.

Anger. Alex Koh, a 41-year-old engineer and personal finance YouTuber from Glasgow, directs his towards Do Kwon, the South Korean entrepreneur who founded terra/luna. Koh says he lost enough to buy a four-bedroom house in London. Kwon has been accused of fraud by five investors based in South Korea; he is being investigated there by a financial crimes unit and in the US by the Securities and Exchange Commission.

The rollercoaster has taken crypto holders on a downward spiral. Many people have been caused serious financial pain

Bargaining. Vahid, a 31-year-old from London, has used Twitter to plead for his money with Alex Mashinsky, the founder of Celsius. Vahid’s life savings, more than £50,000 in cryptocurrency, is locked in his Celsius account. Vahid had planned to use the money to start a business or buy a house. For support, he spends his time on conference calls with other Celsius victims; I listen in to one. “I know anything short of getting your native token [initial investment] back is unacceptable,” says one investor, with desperation in his voice. “But would you rather get back 10%, or 20%, or 34%, you know? Now, I’m hoping it’s not a complete loss.”

Depression. “I thought I’d be able to retire early,” says Koh. “But it’s all gone down the drain. I’ve never cried so much in my life.”

Acceptance and hope. “I worked my ass off doing 16-hour days for six years to earn this money,” says Driksne. “This is hard-earned money. That’s what hurts the most. I lost six years of hard work. But I am trying to stay positive. I’ll make it back again.”

Shame. Vahid hasn’t told anyone he has lost his life savings. “I don’t want people turning around to me, saying: you should have taken your money out last year,” he says. I ask him if he is embarrassed. “Of course,” he responds.

Processing. “I hope that I can show that I am willing to learn and accept my mistakes,” says Koh. “If I rebound from this, perhaps I can be an inspiration to people elsewhere around the world – or my kids, at least.”