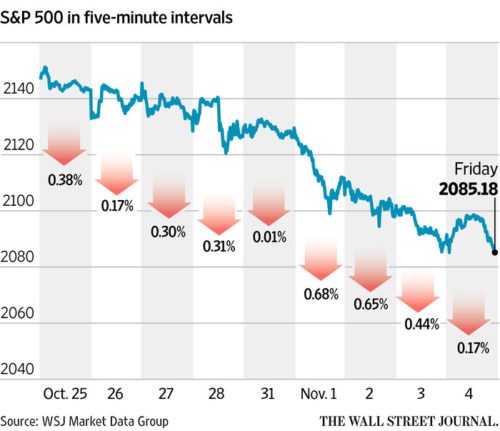 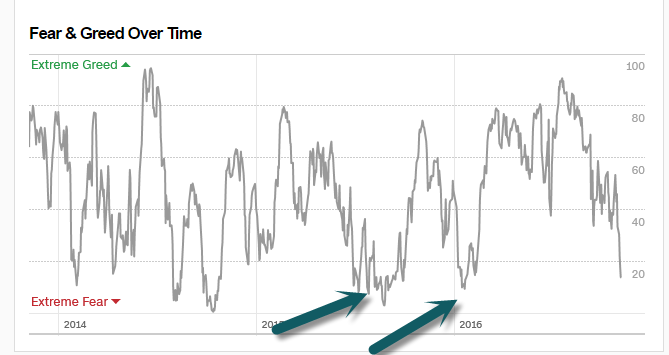 Generally, a lower reading (~0.6) of the ratio reflects a bullish sentiment among investors as they buy more calls, anticipating an uptrend. Conversely, a higher reading (~1.02) of the ratio indicates a bearish sentiment in the market. However, the ratio is considered to be a contrarian indicator, so that an extreme reading above 1.0 is actually a bullish signal, and vice versa.[2]https://en.wikipedia.org/wiki/Put/call_ratio 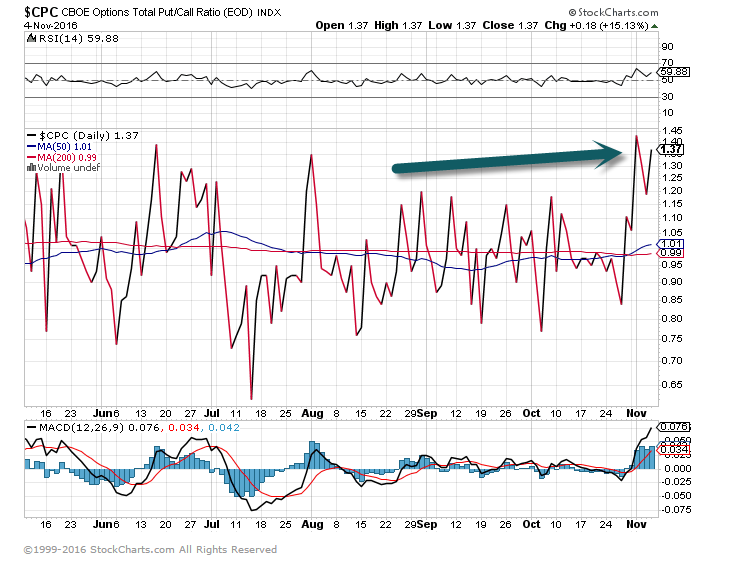 2.For Technical Traders…Same Story on Short-Term. 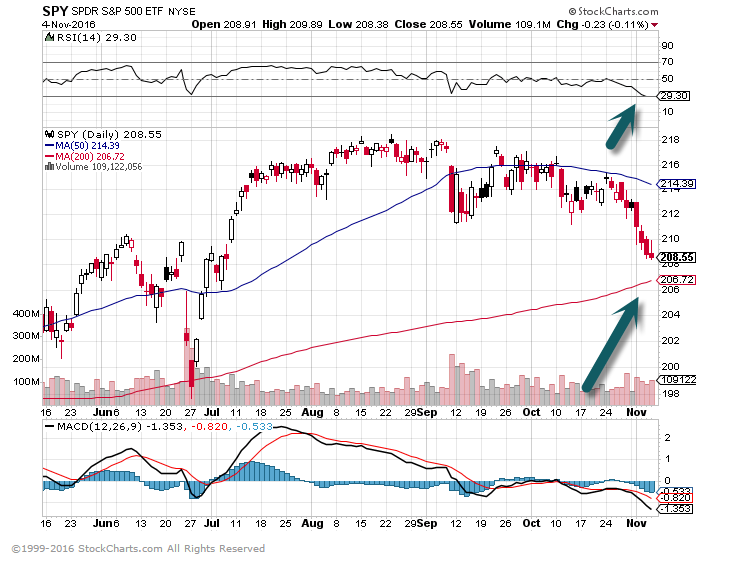 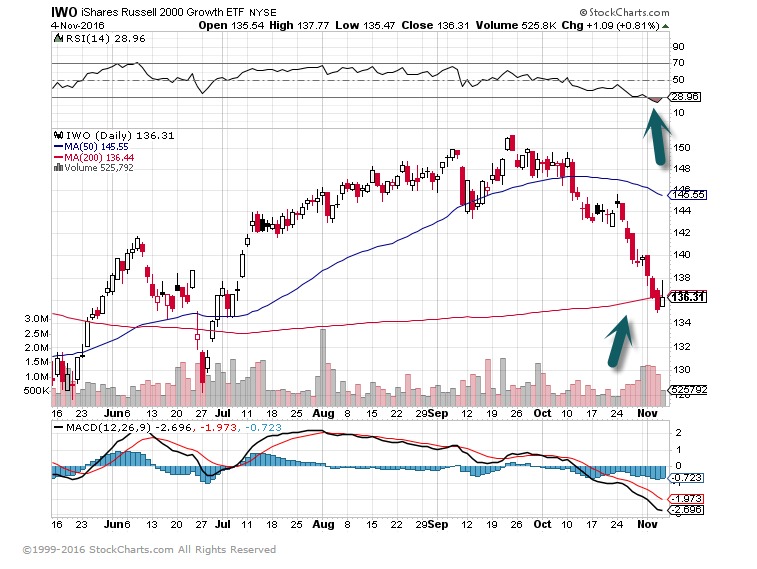 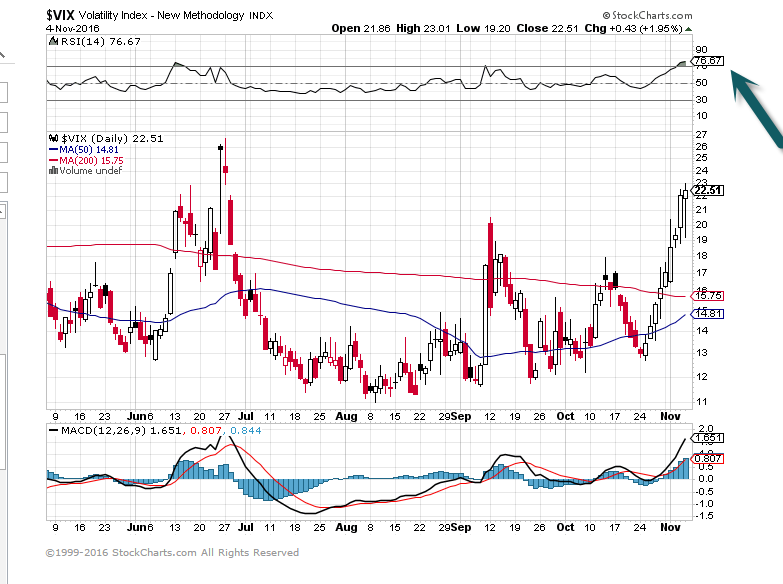 With the 2016 presidential election less than one week away,, today’s chart illustrates how the stock market has performed during the average election year. Since 1900, the first five months of the election year have tended to be choppy. That choppiness was then followed with a rally right up to the November election. One theory to support this election year stock market behavior is that the first five months of choppiness is due in part to the uncertainty of the outcome of the presidential election (the market abhors uncertainty) with the market beginning to rally as the outcome of the election becomes increasingly evident. While stocks tend to rally this close to election day, recent uncertainty as to the outcome has resulted in somewhat of a sell-off. 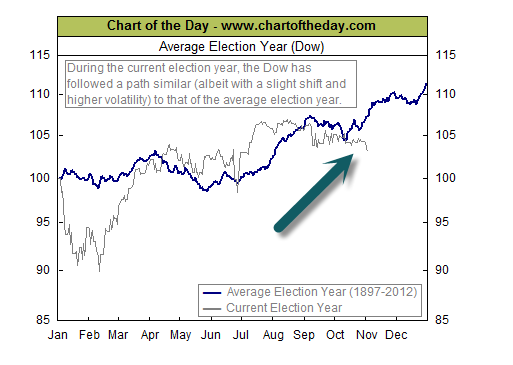 Some interesting charts and trends that have stood out over the last few months: 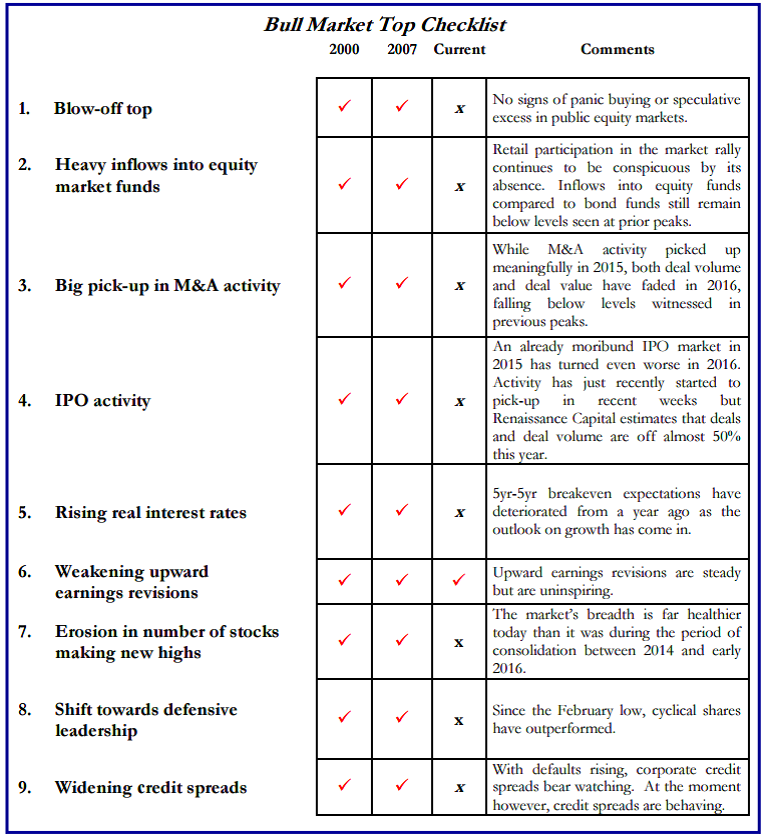 Source: Strategas market top checklist
Thanks to Mike Nolan at Janney for Chart.

Ryan Detrick, senior market strategist at LPL Financial, said that investors should not fear the slow decline, which he mainly attributes to nervous investors facing an election that offers two drastically different outcomes.

The 6- and 12-month returns following eight or more consecutive days of declines are usually positive and impressive, according to Detrick. 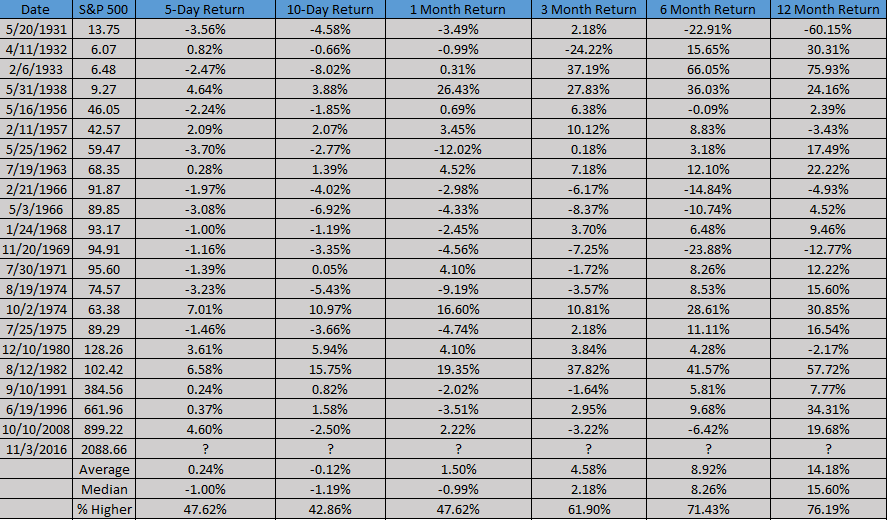 Detrick said he focused on instances where the S&P 500 fell for eight days or longer because, with more than 20 instances, he was able to draw more reliable conclusions about average returns and probabilities. According to Howard Silverblatt, senior index analyst at S&P Dow Jones Indices, there were only 14 instances of 9-day losing streaks since 1928.

Detrick said that since 1931 there have been 22 times when the S&P 500 posted a losing streak of eight days or more. In those instances, the S&P 500 rose over the next 12 months 76% of the time, with an average return of 14%. Stocks also rose in the six-month period after such a streak 74% of the times, returning 8.9% on average. 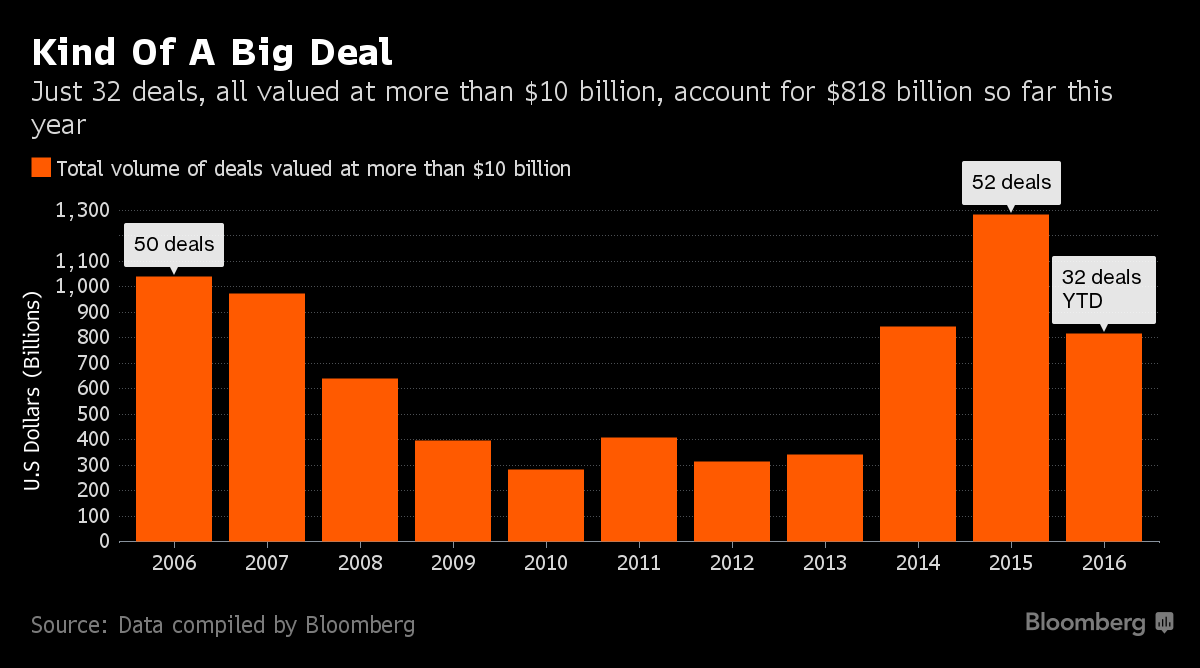 China Much Lower in Dollar Amount, but Big Growth in Deals. 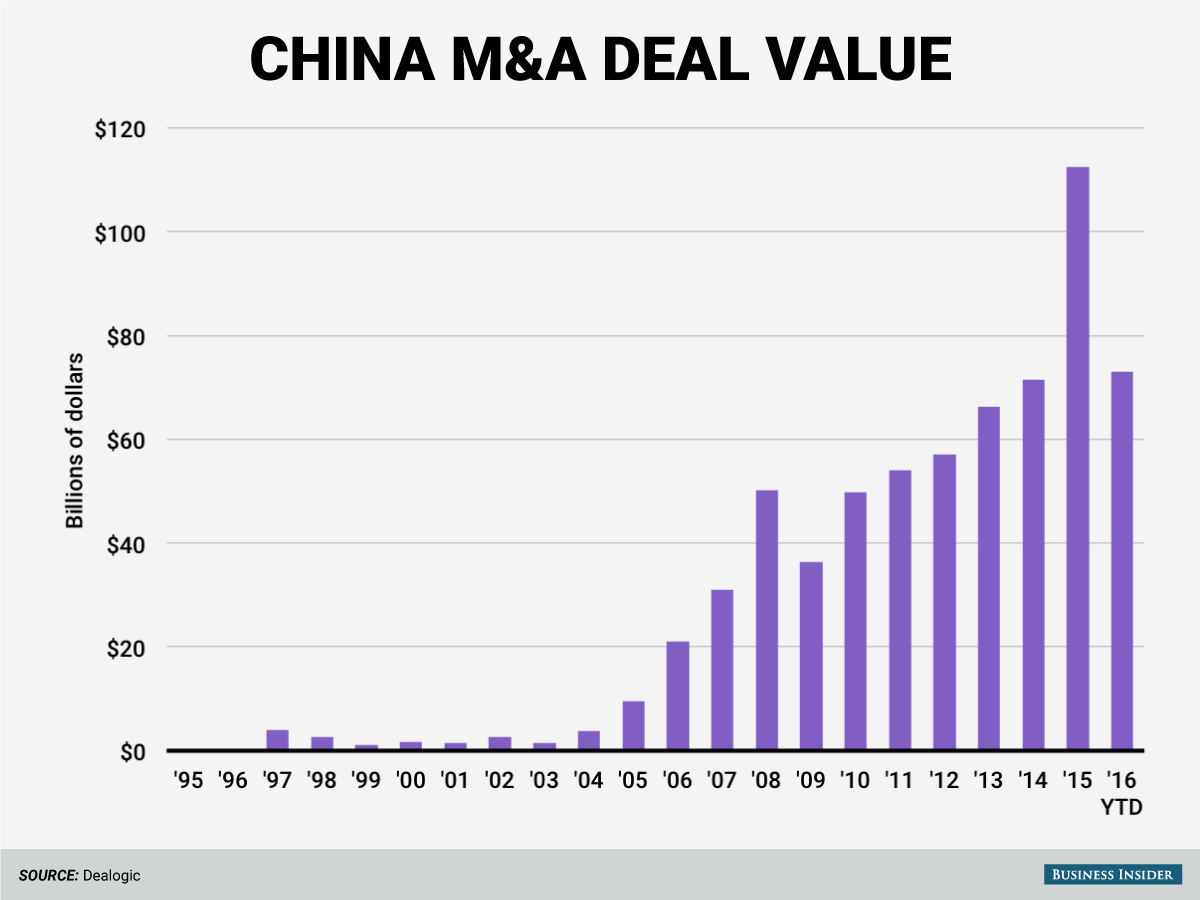 7.Unemployed Over 26 Weeks Back to Long-Term Trend After Hockey Stick Spike….Hourly Earnings Still Below Trend. 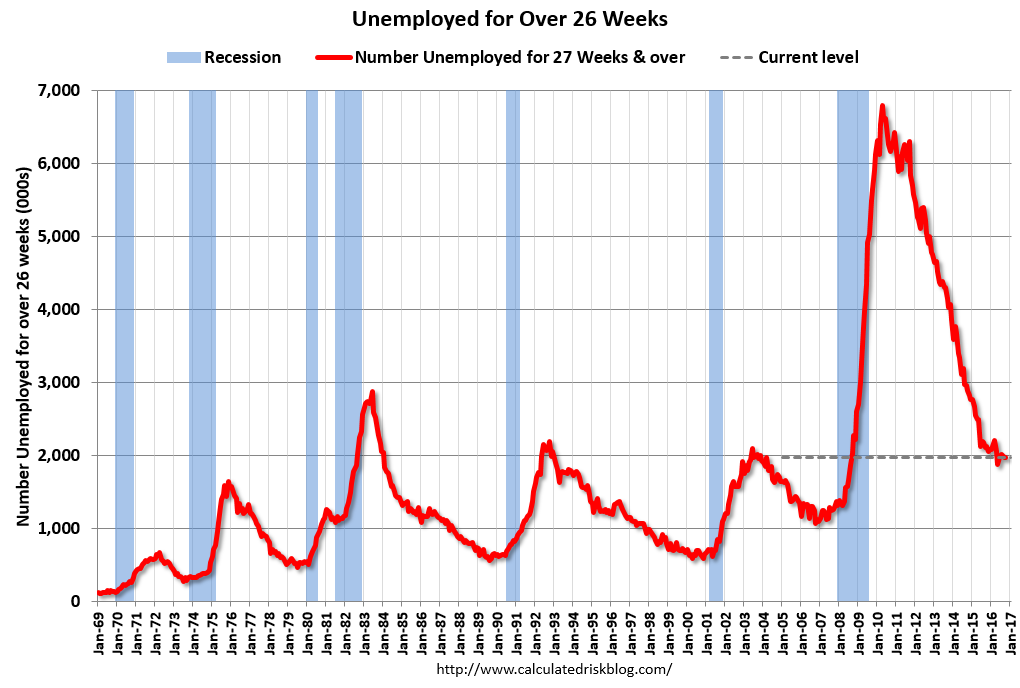 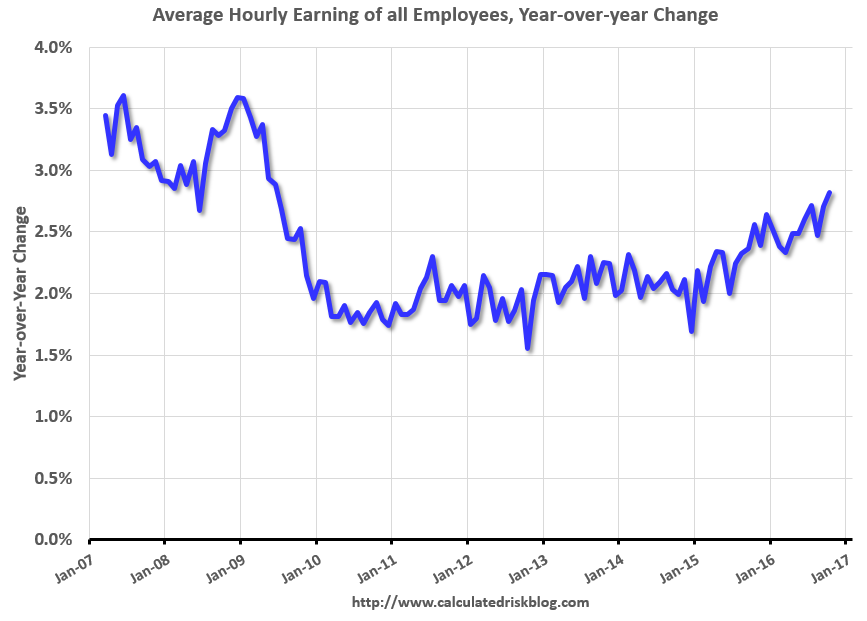 8.FBI Director Comey Reversed the Polls and the Market Futures.

Clinton’s odds have also recovered this weekend on another betting market, PredictWise, and now stand at 87%. 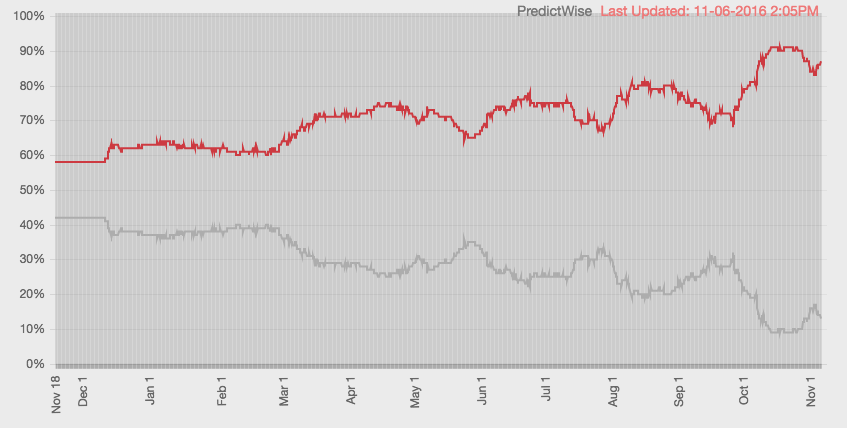 The latest poll averages, meanwhile, remain modestly in Clinton’s favor, as do the odds of statisticians like FiveThirtyEight’s Nate Silver.

In the latest national poll average from RealClearPolitics, Clinton has a 1.8-point lead in the two-way race: 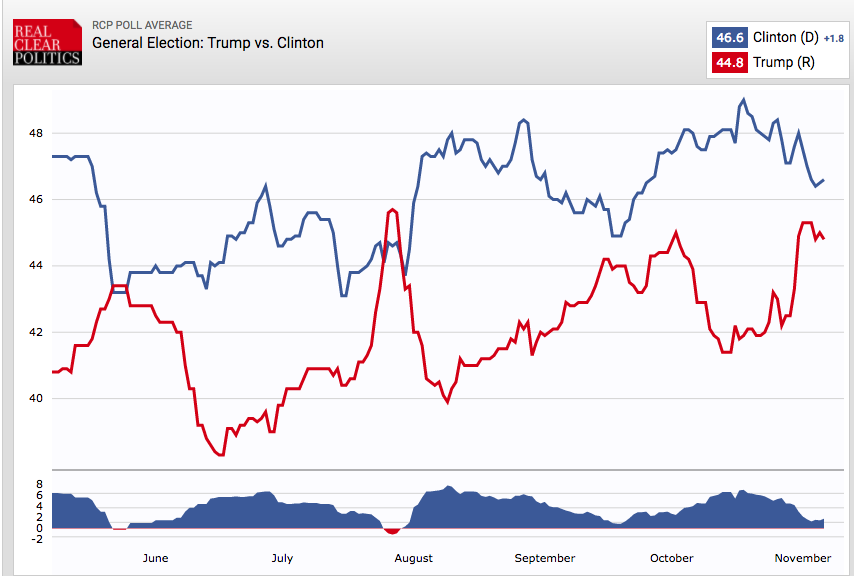 9.The Housing Market Depends on One Chart….Homeownership Rate for Under 35 Years Old.

Homeownership for younger Americans remains on the decline, hitting the lowest level in decades.

Separately, US mortgage activity for home purchase has moved lower recently. Some think the trend is driven not only by higher home prices and tight mortgage market but also the elections uncertainty. 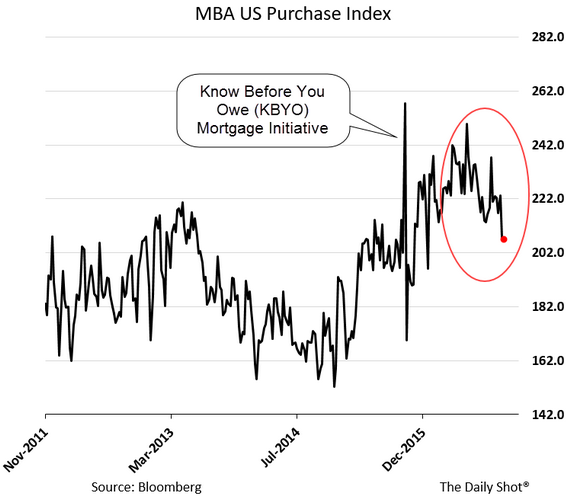 10. 10 Uncomfortable Deeds That Will Pay Off Forever

T.S. Eliot was clearly onto something when he asked, “If you aren’t in over your head, how do you know how tall you are?” The very act of stepping outside of your comfort zone is critical to your success and well-being.

Our brains are wired such that it’s difficult to take action until we feel at least some stress and discomfort. In fact, performance peaks when we’re well out of our comfort zone. If you’re too comfortable your performance suffers from inaction, and if you move too far outside of your comfort zone you melt down from stress. 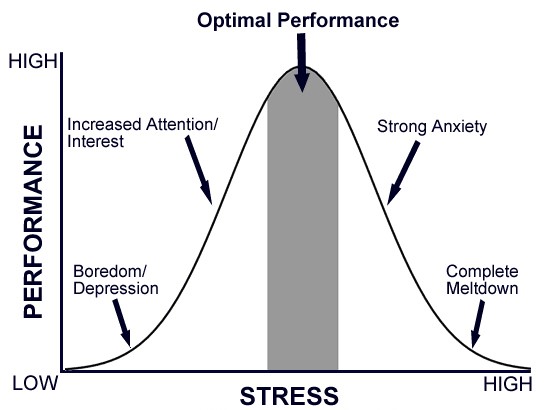 Peak performance and discomfort go hand in hand. Stepping outside of your comfort zone makes you better, and it doesn’t have to be something as extreme as climbing Mount Everest. It’s the everyday challenges that push your boundaries the most, none of which require a flight to Nepal. Step out of your comfort zone and embrace these challenges.

Bringing It All Together

Staying in your comfort zone means stagnation. Just as an oyster only makes a pearl when it’s irritated by a grain of sand, no one has ever accomplished anything remarkable when comfortable.

What do you do to move out of your comfort zone? Please share your thoughts in the comments section below, as I learn just as much from you as you do from me.