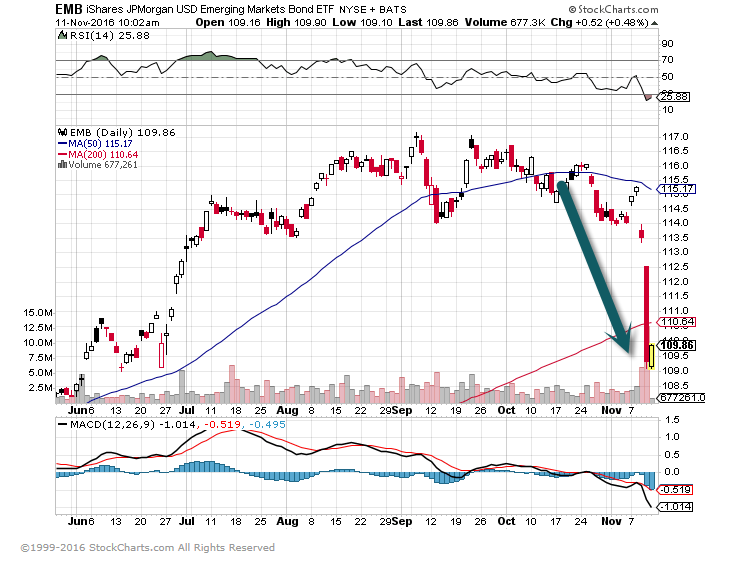 Negative interest rates history?  Did German rates going negative signal the generational low in rates?German (and other European) government bonds had a bad day. The 10yr Bund yield hit 30bp for the first time since April, and the 30yr is approaching 1%. 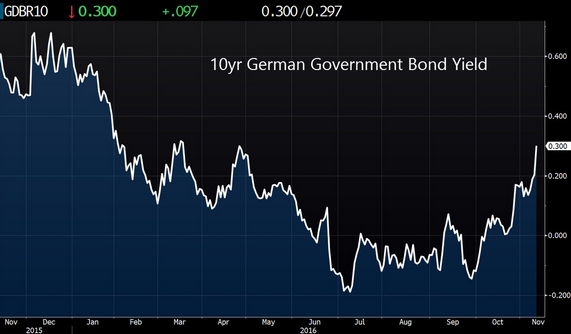 2.Trumpenomics….Industrial Sector Breaks out of 4 Year Range on Big Volume.

$11 Trillion tax cuts and a massive stimulus package=industrials break out.

Industrials
The Industrials Sector includes companies whose businesses are dominated by one of the following activities: The manufacture and distribution of capital goods, including aerospace & defense, construction, engineering & building products, electrical equipment and industrial machinery. The provision of commercial services and supplies, including printing, employment, environmental and office services. The provision of transportation services, including airlines, couriers, marine, road & rail and transportation infrastructure. 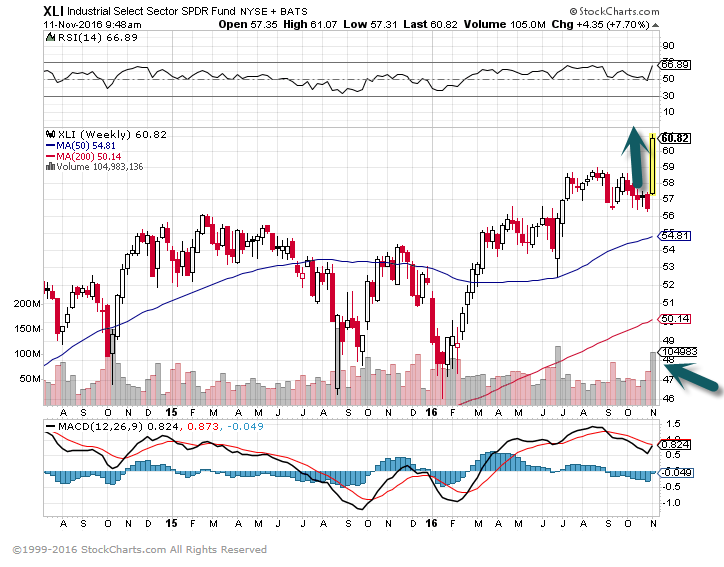 Breaking Out of a 4 Year Box on Big Volume. 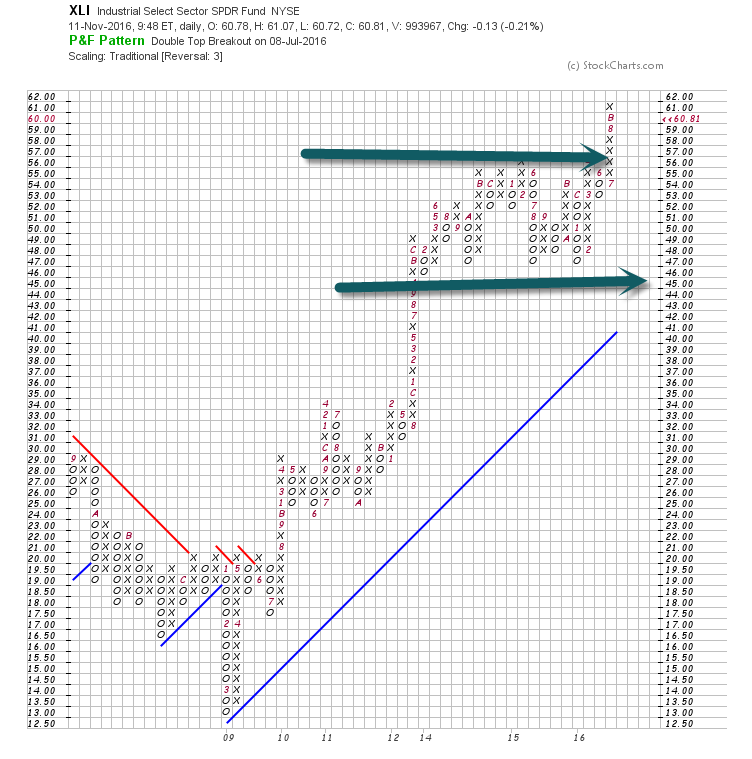 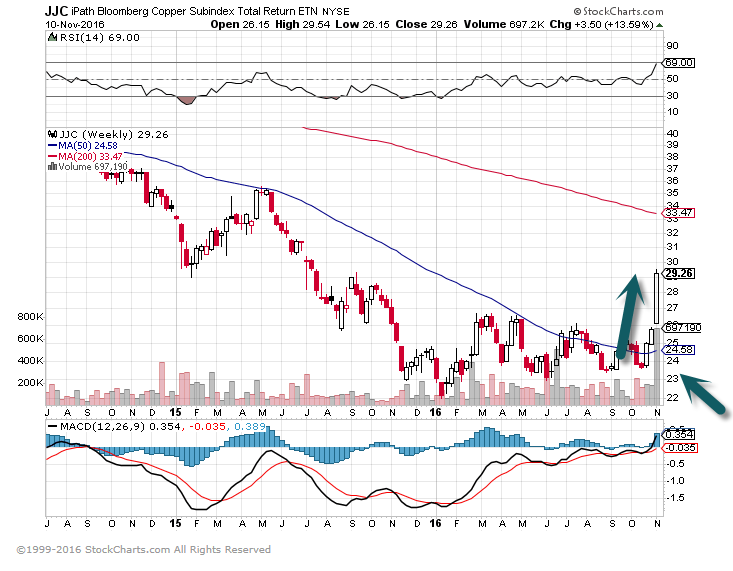 4.Trumpenomics—Tax Holiday to Bring Trapped U.S. Corporate Money Back Home…Last Time this Happened was 2004-Companies Repatriated $300Billion and Spent it on Buybacks…Buybacks Rose 84% in 2004 and 58% 2005

PKW-One of my 3 Horseman of Bull Market….Just when you think buybacks can’t go any higher, we may be looking at massive repatriation of funds under Trump. 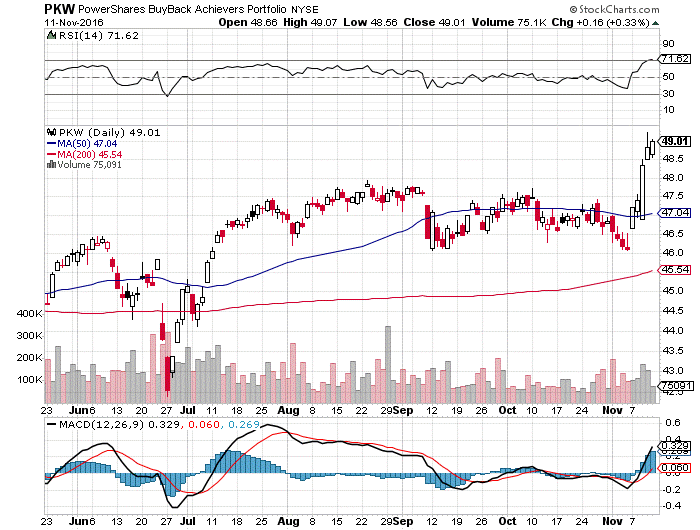 5.Trumpenomics….This Very Well be the Least Talked About but Most Important Chart to Watch in Market…Watch to see if Transports Break out to New Highs…Positive Signal for Economic Growth. 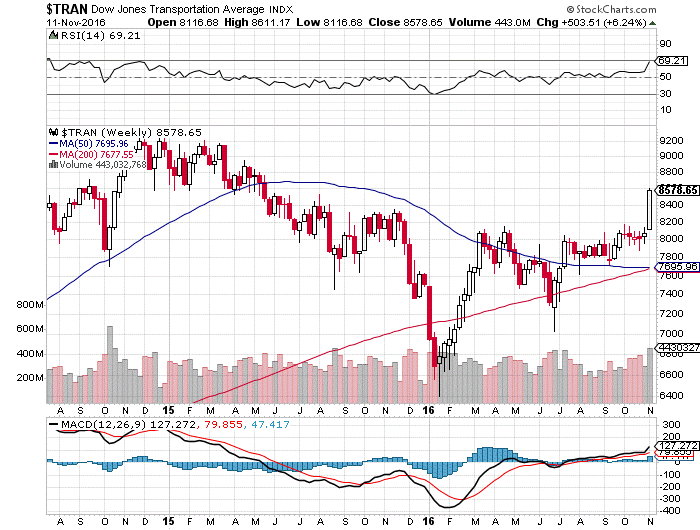 For those who like the Dow Theory, the transport shares are outperforming. 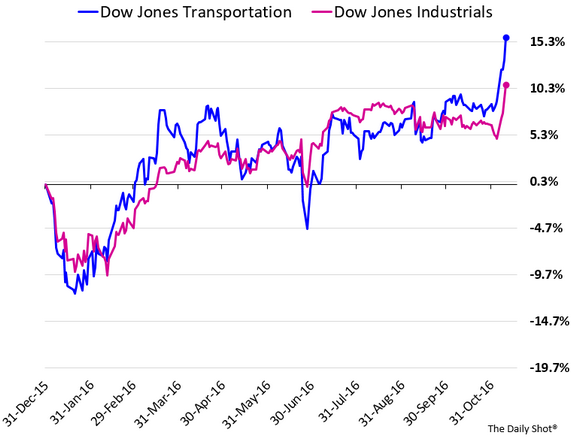 6.Real Assets-homes, collectibles, commodities-are at the lowest levels since at least 1926, relative to financial assets like bonds and stocks, which have benefited the most from central bank liquidity.

Real Assets vs. Financial Assets….8.2% of the $3.4 Trillion ETF Universe is Exposed to Real Assets. 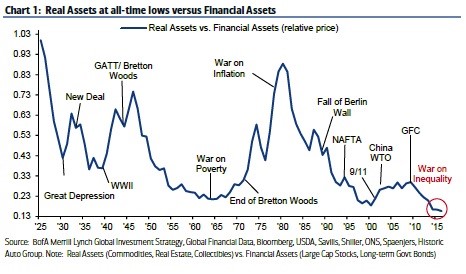 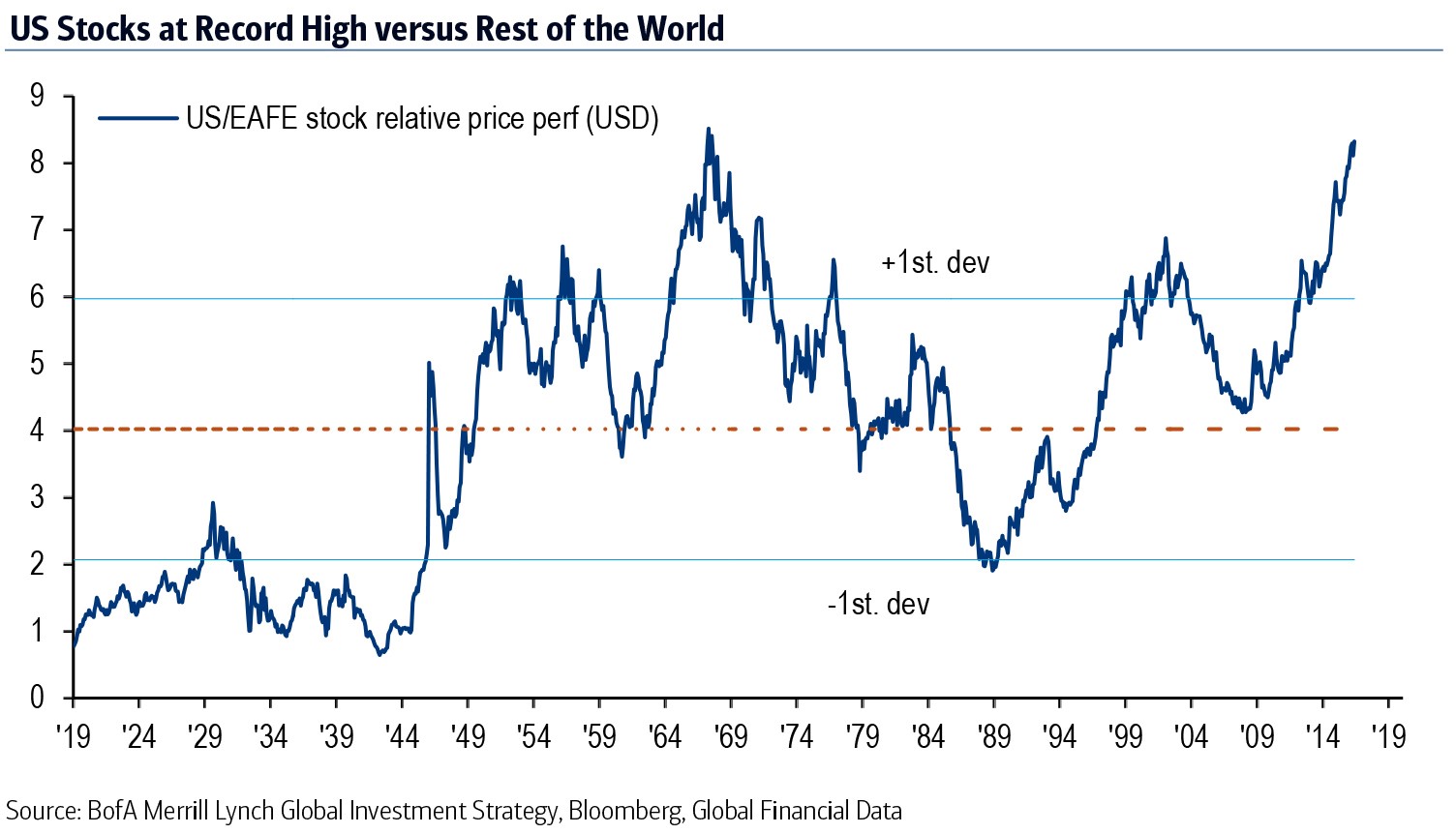 Piper Jaffray’s November 2016 issue of The Informed Investor included some great insight on investor sentiment.  In short, we’ve reached bearish sentiment levels that, from a contrarian standpoint, suggests a positive outlook for equities:

The AAII Investor Sentiment survey measures the percentage of individual investors who are bullish, bearish and neutral on the stock market for the next six months.  Of particular interest is the bullish percent number that is a solid contrarian indicator and often shows investors’ complacency/fear at important turning points in the market.

From a historical perspective, the lower decile (bottom 10% readings) of the Bullish % numbers resides at 26%.  For the week ending November 2, 2016, the sentiment survey recorded a bullish % reading of 23.6%, which falls in the bottom decile of all observed values since July 1987 (as shown in the table right below).  From a contrarian perspective, the data suggests a positive bias and that the path of least resistance is likely higher.

From a performance perspective, we went back in history (1987-present) and calculated average and median market returns after such low readings were observed.  We note that the SPX index has been higher over the following 13- and 26-week periods, 74% and 81% of the time respectively.

Additionally, the SPX has recorded positive average returns of 7.7%, six months after weak readings of the Bullish % numbers were observed. 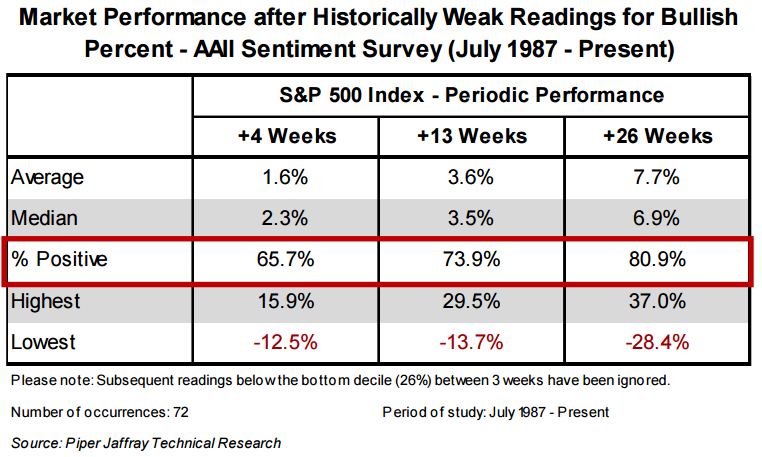 9.Wow!  This One Surprised Me….Collapse of Average Number of Laws Enacted. 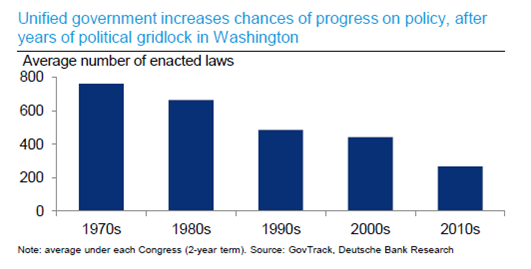 From Torsten SLok at Deutsche Bank

10.5 lessons we can learn about leadership from some of the most famous generals in history

Looking back in history, it’s easy to think of famous leaders as static figures, like statues in a museum.

However, they had strategies and goals we can still learn from. History.net helpfully ranks all of the greatest generals in history, including several notables from the ancient world. Business Insider took a look at some of these military strategists to get a sense of what leadership traits they displayed.

Here are the top five lessons we can learn from some of the greatest generals in ancient history:

Leonidas I taught us to put our troops before ourselves. 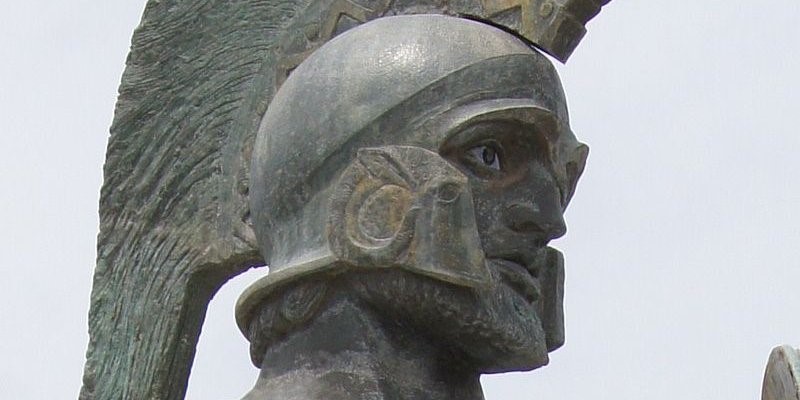 Today, Leonidas I is probably best known as the protagonist of the film “300” — the guy who screams, “This is Sparta!”

The Spartan warrior king went down in history for leading the last stand at the Battle of Thermopylae in 480 BCE, holding off the massive Persian force with a smaller group of soldiers. This maneuver allowed the rest of his Greek allies to escape.

As James R. Holmes wrote for Real Clear Defense, the sacrifice remains “a parable of valor in the face of insurmountable odds.” As a leader, Leonidas understood the importance of putting the well-being of his troops before his own in order to ensure the freedom of Greece.

Themistocles taught us to make our own luck. 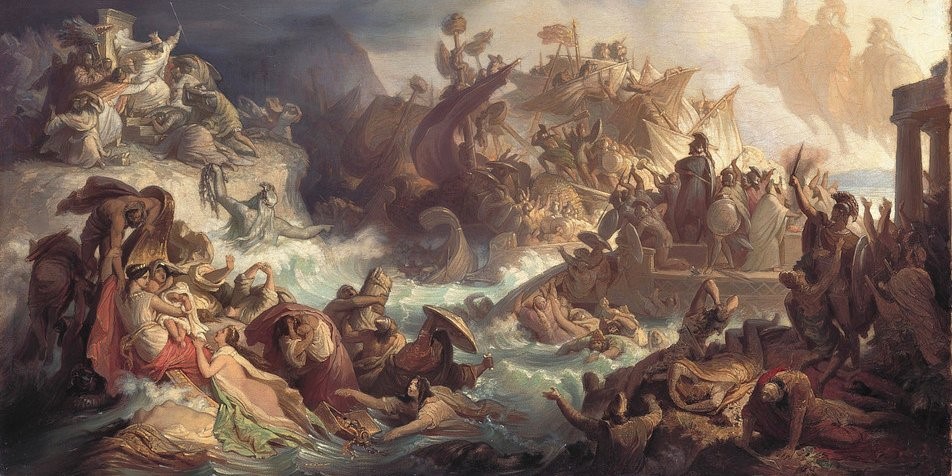 Themistocles, an Athenian politician and general, fought alongside Leonidas during the second Persian Invasion of Greece. In 480 BCE — the same year as the Battle of Thermopylae — he engineered the naval Battle of Salamis, which proved to be the turning point in the war.

As Business Insider previously reported, Themistocles and his forces were up against the Persian Empire at the peak of its power.

Despite those odds, the outnumbered Greeks were motivated as they fought to defend their homes. This especially showed at the Battle of Salamis, where Themistocles convinced his allies to engage with the Persian fleet and leveraged his knowledge of the winds to overcome the enemy.

Alexander the Great taught us the danger of burning out.

Alexander the Great is considered by many to be one of the most successful conquerors in history. He is largely responsible for the spread of Hellenistic culture around the Mediterranean and beyond.

However, his confidence in his own divinity ultimately prompted him to overstretch himself and his empire. After his tired army forced him to turn back in India, he had completely burned out. Even the most talented leaders can’t overwork themselves — they know when to back off or take a break. Alexander’s inability to do this largely caused his untimely death in 323 BCE at the age of 32.

Hannibal taught us to build a support system.

Carthaginian general Hannibal Barca brought the Roman Republic to his knees during the Second Punic War. In 218 BCE, he famously crossed the Alps with his soldiers and elephants, and proceeded to spend the next 15 years conquering Italy.

Today, he is widely considered one of the most brilliant military strategists of all time. His downfall was ultimately brought about by the very people he was fighting to defend.

As Joshua J. Mark writes in the Ancient History Encyclopedia, Hannibal constantly begged the rulers of Carthage to send him enough men and supplies to take Rome and end the long war. Carthage refused, sending “… only as much aid as would not inconvenience them.”

Ultimately, Rome turned the tables on Hannibal, attacking Carthage and forcing him to return to Africa, where he was defeated in the Battle of Zama. This historical incident is excellent proof that talent and smarts are important, but you’ll need the support of others to truly succeed.

Caesar taught us to take risks. 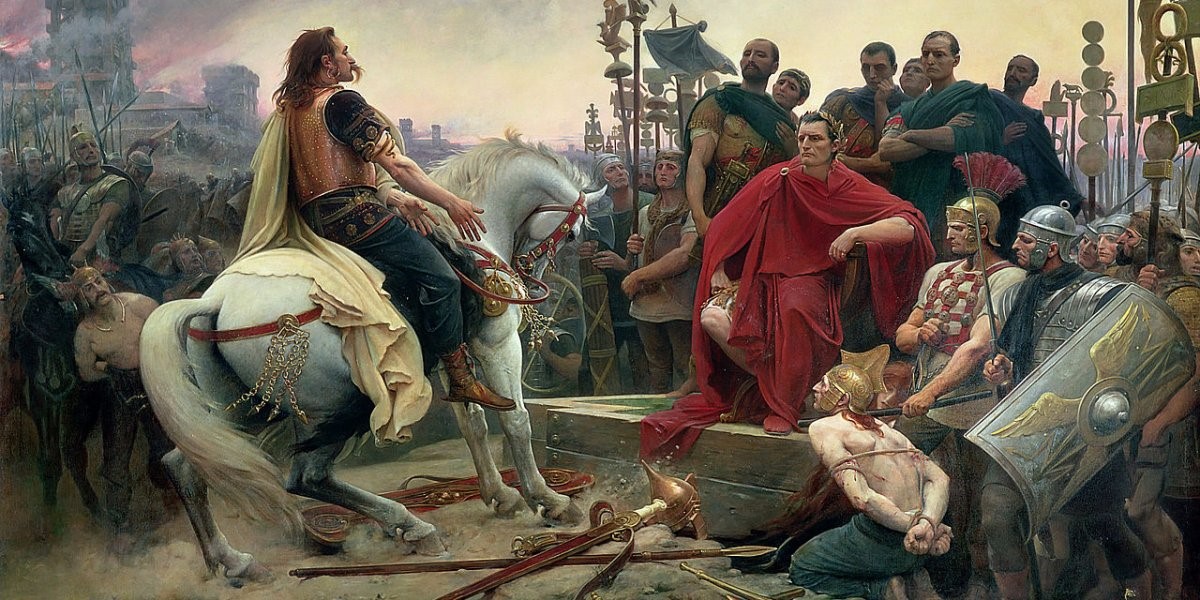 When Julius Caesar crossed the Rubicon River with his army in 49 BCE, he was essentially declaring war on the Roman Republic.

In “The Life of the Deified Julius,” Suetonius writes that Caesar quoted an Athenian playwright as he crossed the river, declaring “the die is cast.”

He sparked a bloody civil war between his supporters and enemies, but ultimately prevailed and became dictator. Had he not taken that major risk, he might not have achieved such success (although he might have also escaped assassination). It just goes to show you — sometimes gambles pay off. The best leaders know when the risk is worth it.

His big risk paid off for him in the short term, and signaled the death knell of the Roman Republic.