The United States: The futures-implied Fed Funds rate hike probability for this month rose to 94%. 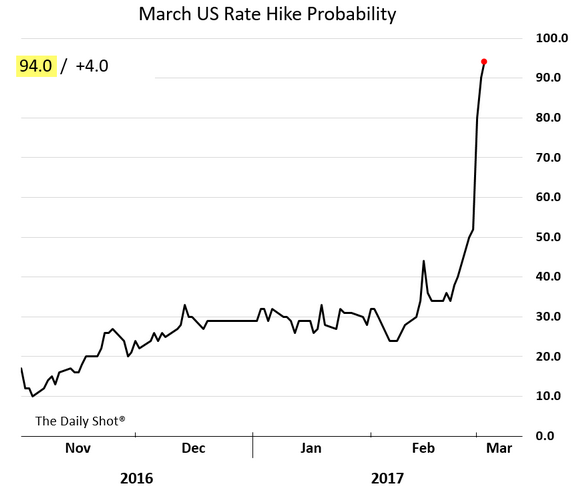 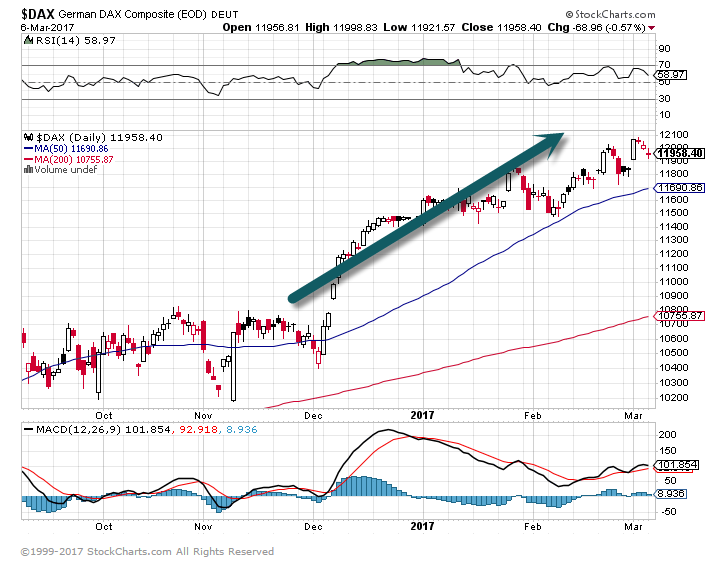 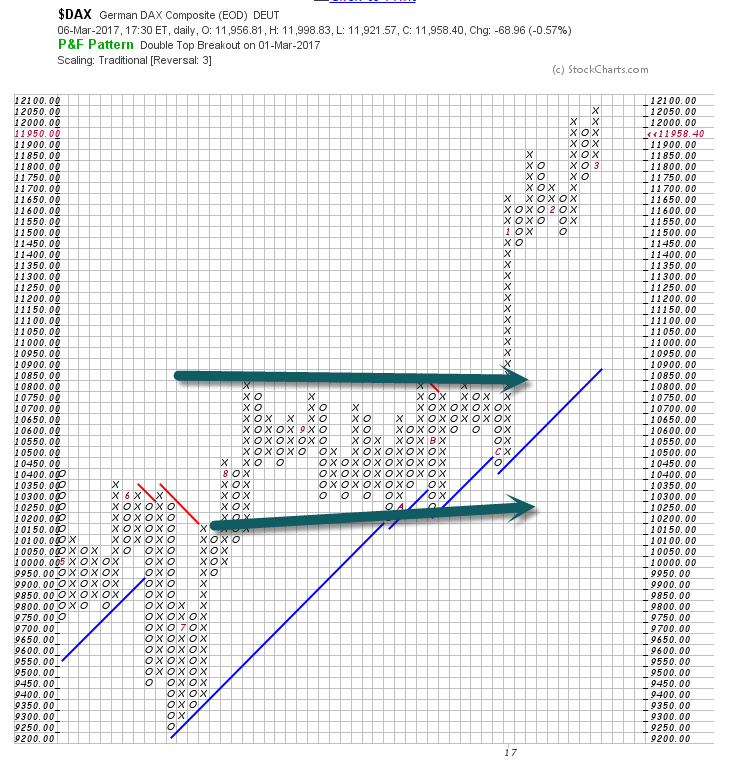 3.German Factory Orders Took A Big Spike Down for January.

German industrial orders slumped 7.4 percent in January, the biggest fall since January 2009 and nearly three times as steep as the 2.5 percent fall expected by economists.

GOT COMMODITIES?– Now, as signs of inflation and improving global demand have returned, investors are beginning to pile back into commodities – Commodity assets under management globally rose 7% in January from the previous month to $391 billion, up more than 50% compared with the previous year From Dave Lutz at Jones
Bullish bets on oil, copper and cotton futures all hit record levels in January, according to data from the Commodity Futures Trading Commission that goes back to 2006. That was the first time in nearly a decade that this cross section of materials and resources established new highs simultaneously

CRB-Commodities Index Still has not Broken Above Long-Term Red Trendline. 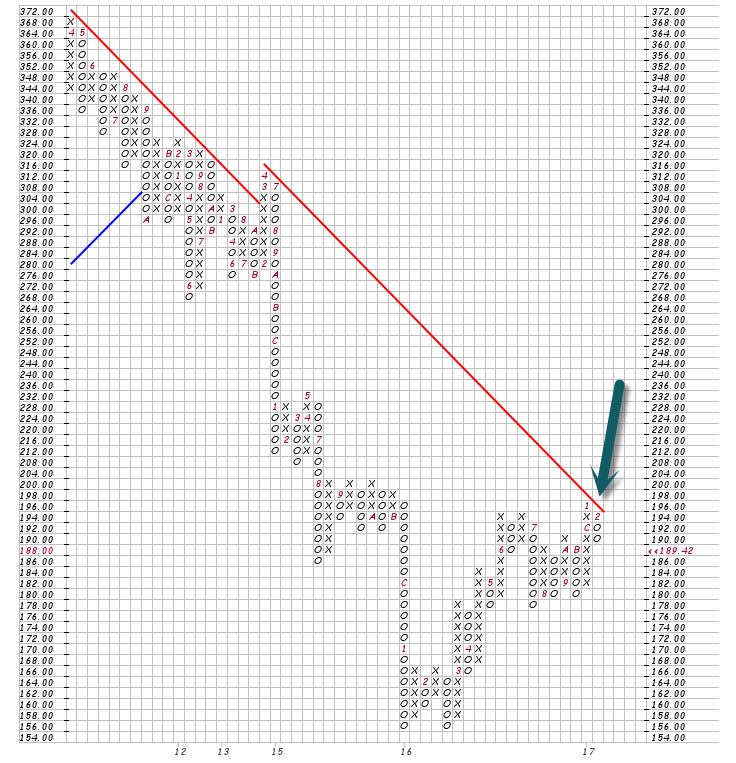 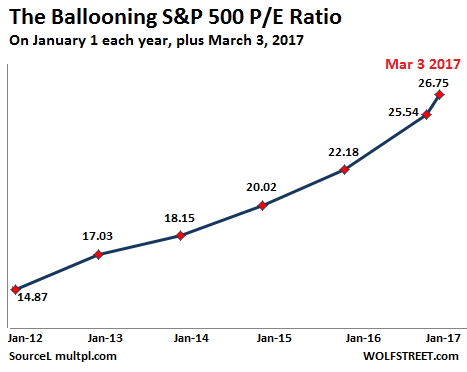 This is Worse than Before the Last Three Crashes

6.Here is the Fear and Greed Index Overlay with S&P. 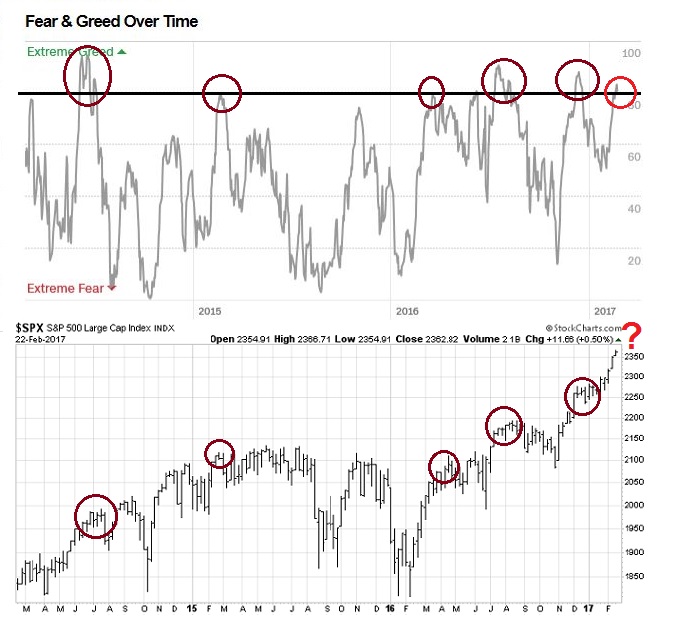 From Humble Student of Market
http://humblestudentofthemarkets.blogspot.com/

7. The quantity of new private equity funds raised continues to decline, dropping from 422 in 2014 to 356 last year…. Yet the percentage of those funds to exceed $5 billion in commitments continues to rise

The Return Of The Mega-Fund

ShareTweetPostFlip
The quantity of new private equity funds raised continues to decline, dropping from 422 in 2014 to 356 last year—that’s according to our 2016 Annual PE & VC Fundraising report, which was released on March 1.
Yet the percentage of those funds to exceed $5 billion in commitments continues to rise. There were 13 such funds closed last year, comprising 3.7% of all new buyout vehicles raised—the largest figure in any year since before the start of the financial crisis. In contrast, just 25% of new buyout funds last year closed with fewer than $100 million in commitments—the lowest figure since before the crisis. 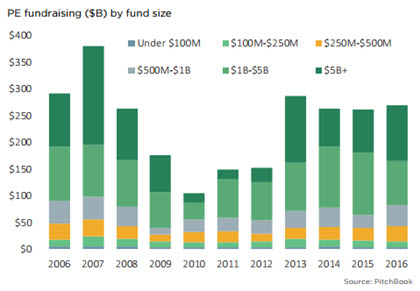 Mega-Fund
As you’d expect, the figures are much starker when considering those mega-funds in terms of capital raised. Those 13 new vehicles exceeding $5 billion combined to account for a whopping 38.4% of all new PE commitments in 2016, a jump from 30.7% the year before. One takeaway: Private equity’s largest, most established firms are finding it easier than it’s been in a decade to raise capital, while some of the industry’s smaller players are getting squeezed out.
For both the PE and VC universes, there’s lots more information where that came from in our latest fundraising report.
Article by PitchBook

8.There are More 26 Year Olds than any Other Age Group….That is a Good Thing.

There are more 26-year olds than any other age group. This wave of echo-boomers will over the coming years get jobs and get married and increase their consumer spending. As they begin to have children we will see another echo in the age-distribution over the coming years, see the first chart below. The bottom line is that even though demographics is moving with glacier speed, it continues to be a very important theme for long-term investors. For an overview of the implications, see the second chart below, which is from my client presentation titled: Demographic trends that matter for investors. 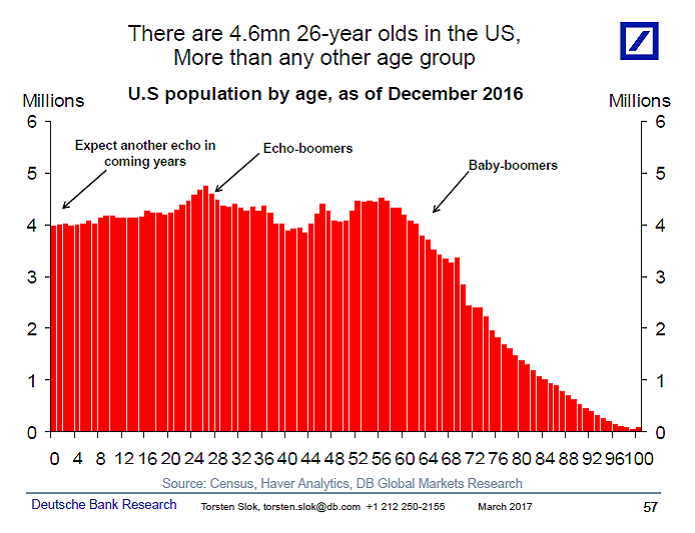 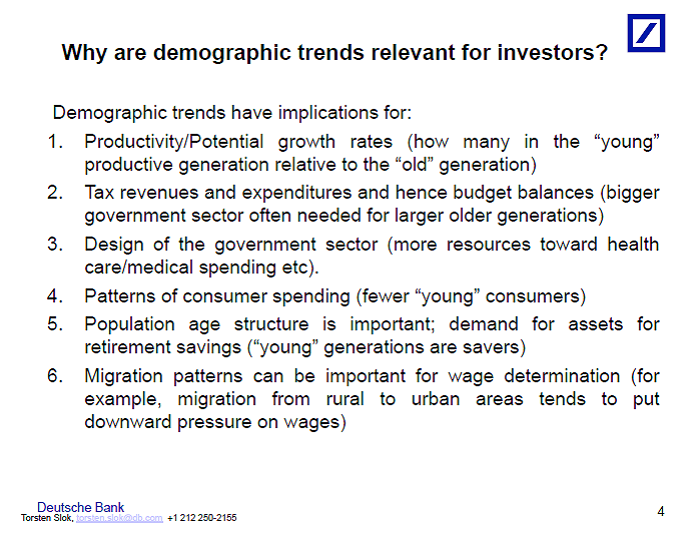 9.Corporate Insiders Sold the Most Stock in 6 years.

Saut wrote in a report that “Corporate insiders sold $7.8 billion of their companies’ stock in February, which was the most in roughly six years.”

Barrons Ratio has actually settled down.

10.How Champions – and Great Investors – Think

In my last two columns, I discussed New York Times columnist Robert Frank’s thesis that the key difference between the haves and the have-nots in this country is not talent, hard work or persistence, but luck.
(I’m debating Mr. Frank at FreedomFest in Las Vegas, July 19-22. To join us, click here.)
I have a neighbor whose views are diametrically opposed to Frank’s. His name is Dr. Bob Rotella – and he is the world’s leading sports psychologist.
Bob has worked with Olympic gold medalists, world tennis champions, the winners of 84 major golf championships, NCAA champions in basketball, soccer, lacrosse and track and field, and some of the world’s greatest musicians.
Many of today’s finest athletes, including LeBron James and Rory McIlroy, consult with him regularly.
He has also worked as a consultant to many of the world’s largest companies, including General Electric, Ford, Coca-Cola and Merrill Lynch.
Bob has devoted his life to helping people who want to be exceptional. And he summarized some of his most important findings in his latest New York Times best-seller, How Champions Think.
Throughout his career, Bob discovered that great achievers share many attitudes and attributes.
Here are just a few of his findings about what sets the best competitors – in business and in sports – apart from the also-rans:
1. Intense optimism. It’s tough to achieve great goals without an unwavering conviction that you will achieve them. Exceptional people generally do this through intense, purposeful visualization. Optimism keeps them juiced, excited about their prospects and willing to work harder than others. Optimism alone doesn’t guarantee anything, of course. But it is an essential ingredient. There is an almost perfect correlation between negative thinking and failure.
2. A confident self-image. We all construct a mental picture of ourselves. To a great extent, that self-image determines what we become in life. Champions view themselves as winners. And they devote their lives to making that image a reality.
3. Habits of excellence. Exceptional people follow strict habits that make success almost inevitable. Commitments are a dime a dozen. But unwavering perseverance is a virtue in short supply. In Bob’s experience, people who struggle generally have habits that undermine their efforts.
4. An unwavering commitment to process. Exceptional people don’t just pursue a dream. They fall in love with the process that makes it come true. They don’t just work longer and harder. They work smarter. Bob claims that if you’re not aspiring to dominate, to be the very best, you’re coasting. And you can coast in only one direction. Backward!
5. Single-mindedness. Champions don’t generally live well-rounded lives. They know they cannot be great business leaders, great parents, great athletes, great socializers and tireless contributors to their communities. They have a passion for one thing and pursue it with the zeal of the newly converted. In Bob’s experience, champions spend most of their waking hours striving to become the very best at what they do – and spend their remaining hours with their families.
6. Honest evaluation. Many people set high standards for themselves. But then they go easy on the self-evaluations. Average achievers tend to overestimate how hard they work. Champions don’t. They define excellence in specific terms and commit themselves to the most rigorous standards.
7. Failure is inevitable in business and in life. But exceptional people don’t let it define them. They find something to cling to, some hope for the future. Each setback comes with some lesson to be learned.
Robert Frank would counter that plenty of people are talented and work hard but – because they aren’t lucky – don’t achieve great business or financial success.
What he doesn’t seem to realize is that working hard is the bare minimum for exceptional people.
Working hard doesn’t guarantee success. It guarantees only that you can live with yourself.
With great achievers, long hours are just a starting point.

They also understand that their biggest struggle is the one within themselves. Anything that causes them to prepare less meticulously or execute less perfectly is a distraction, a hindrance, an encumbrance.
That’s why they surround themselves with, and listen to, those people who will help them succeed.
As Bob writes, “The exceptional person has a vision – of great performances, of a great career, of a great something – and doesn’t care what others may say or think. He ignores information that suggests his dream is unrealistic. He just sets about making that vision a reality.”
Does this really sound like luck?
By sheer coincidence, I read Bob’s book at the same time I read Frank’s. It felt like I was inhabiting alternate universes.
In one, success is determined by greatness of vision, indomitable will, laser-like focus, persistent striving and uncommon resilience.
In the other, well, it’s just a roll of the dice.
And if this is true of business, how about the stock market? After all, no matter how smart or well-informed or hardworking you are, you can’t control interest rates, commodity prices, currency fluctuations, GDP growth, corporate earnings, Fed policy or any of a dozen other factors that affect share prices.
So isn’t stock market success really determined by luck?
The answer – again – is no. And in my next column, I’ll explain why.
Good investing,
Alex
Thoughts on this article? Leave a comment below.