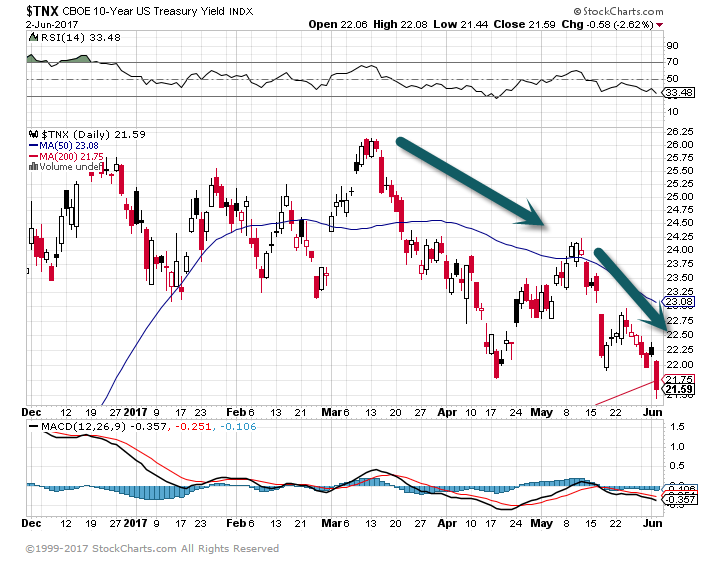 2.Earnings are Driving the Market.

Jun 2, 2017
Below is a chart of the S&P 500’s price versus its trailing 12-month P/E ratio. As you can see, up until the March 1st high for the S&P, its P/E ratio was trending right along with it. Since then, however, we’ve seen P/E contraction, even though the index has gone on to make a new high. This means that earnings (the E in P/E) have outpaced price (the P in P/E) over the last couple of months. That’s a good thing, especially for anyone who was worried about valuations. 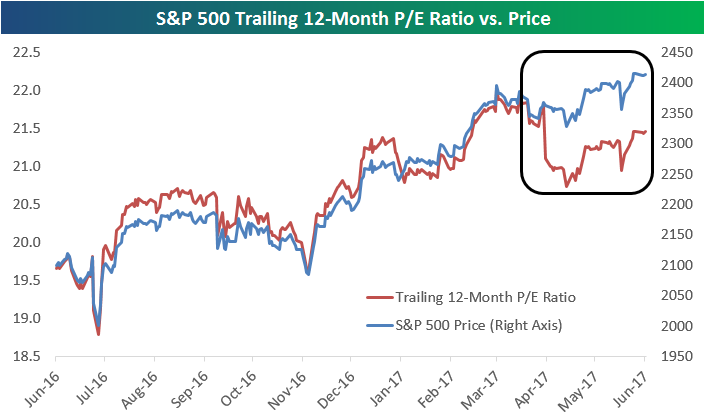 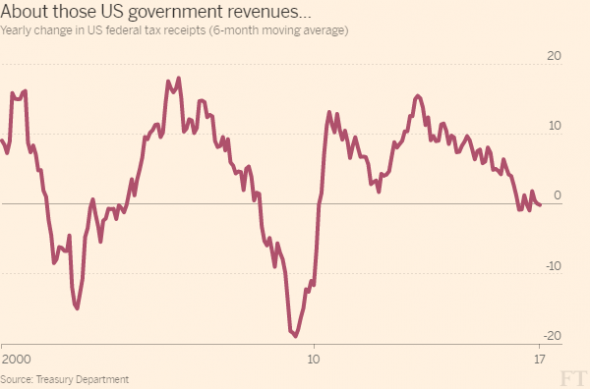 The growth in US tax revenues is sliding.
(ftalphaville.ft.com)
MARKETS
www.abnormalreturns.com

Last year, 18 companies completed IPOs that raised less than $50 million, according to Dealogic. In 1996, 557 companies did.
A decade after their IPOs, 29% of companies that made their stock-market debuts between 1996 and 2000 with revenues of less than $1 billion remained as independent public companies, according to a report by the Kauffman Foundation of Entrepreneurship. 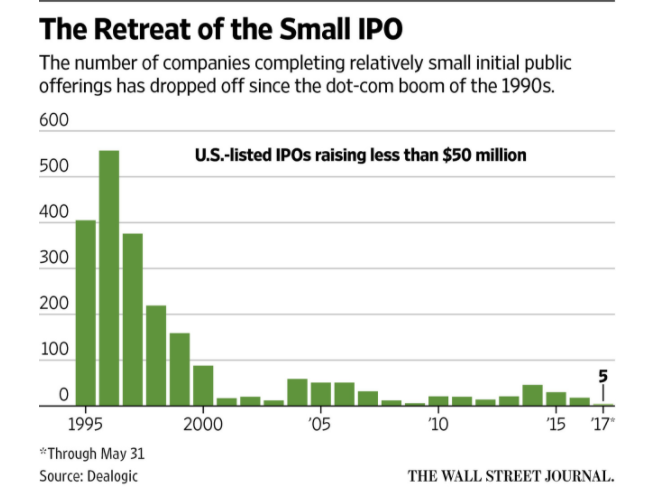 From Dave Lutz at Jones.
LOW IPOs – The New York Stock Exchange is seeking to change its listing standards as it vies for Spotify AB and other hot startups that are considering an unusual tactic called a direct listing.

Direct listings allow companies to have their shares trade publicly, without raising money as in a traditional initial public offering, and there aren’t restrictions on when insiders can sell shares. NYSE filed in March to tweak its rule book on the process, a move the Securities and Exchange Commission will rule on in the coming weeks. In a direct listing, a company transfers its shares to an exchange and lets them trade publicly without being underwritten by a Wall Street bank, as is the usual case in an IPO

360 Money Market℠: Up To 1.00% APY
My friend Jeff Kleintop (Schwab) is out with a highly informative look at the recent rally in emerging market stocks and why it could continue. Kleintop argues that there are four main drivers of EM stocks overall:
· Domestic economics unique to each country
· The economics of the developed markets that influence EM nations
· Currency sensitivity
· Commodity prices
Jeff argues that, at the current moment, all four of these drivers are pointing in the right direction for continued stock market gains in the EM countries.
However, for those looking for an edge, not all four drivers will persist, and not every country is equally sensitive to all four of them. So depending on how good you think you are at this game, here’s a great graphic illustrating the sensitivity of each EM country to each of the four drivers: 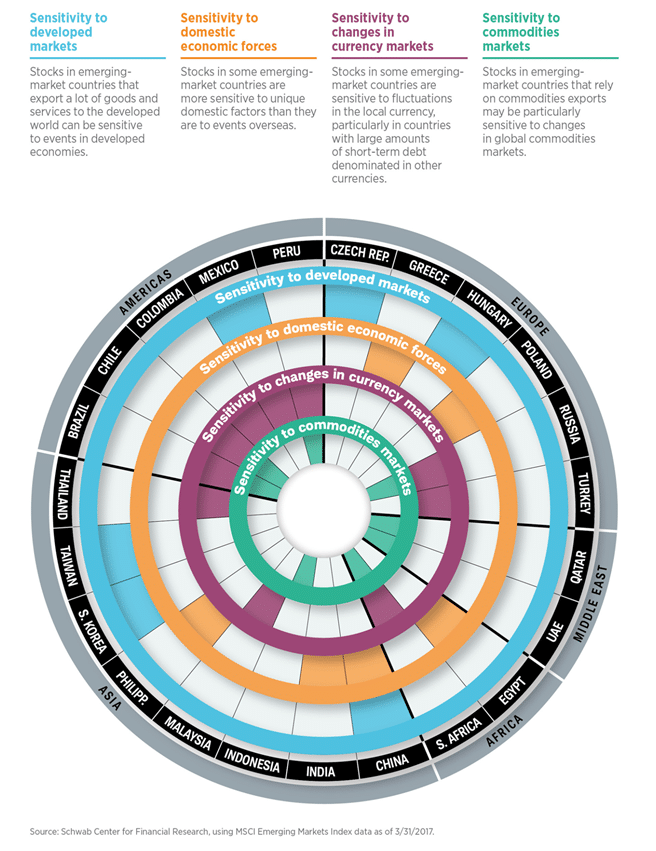 Now head over to check out the whole piece, it’s got a lot of good stuff to consider.
Source:
The Long Period of Underperformance for Emerging Market Stocks May Finally Be Over (Charles Schwab)
http://thereformedbroker.com/2017/05/31/chart-o-the-day-the-four-drivers-of-emerging-market-stocks/

Credit: More Americans are taking cash out of their house by refinancing. 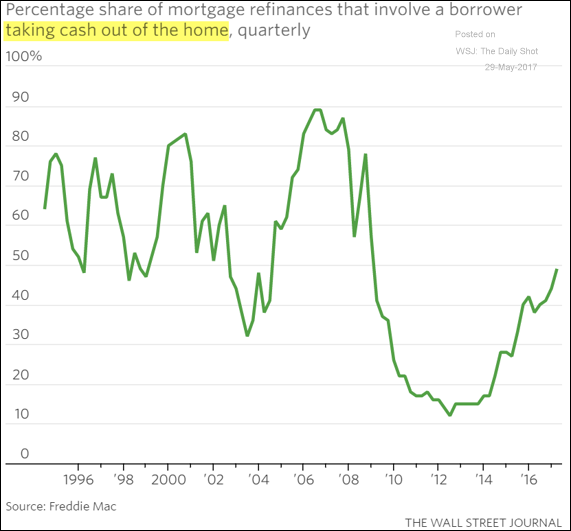 Insider Selling Skyrockets in May

As equity markets continue setting new highs, corporate insiders sold off $9.6 billion worth of stock in May, the highest level of insider selling in six years.
David Santschi | May 30, 2017
The best-informed market participants are taking advantage of record high U.S. stock prices to sell hard. Insider selling has exploded as earnings season blackouts have lifted.
The officers, directors and major holders required to file Form 4 with the Securities and Exchange Commission have sold $9.6 billion in May through Thursday, May 25. This month’s volume is set to surpass the six-year highs of $9.9 billion in February and $10.0 billion in March.

8.The Average Lifespan of Cars and Light Trucks Hits a Record.

Meanwhile, cars are lasting longer. Last year, the number of vehicles in operation hit a record in the U.S. as the average lifespan of cars and trucks continues to lengthen, giving a boost to the service providers and parts makers whose business it is to keep cars on the road. The average age of cars and light trucks hit 11.6 years in 2016, according to data from IHS Markit . 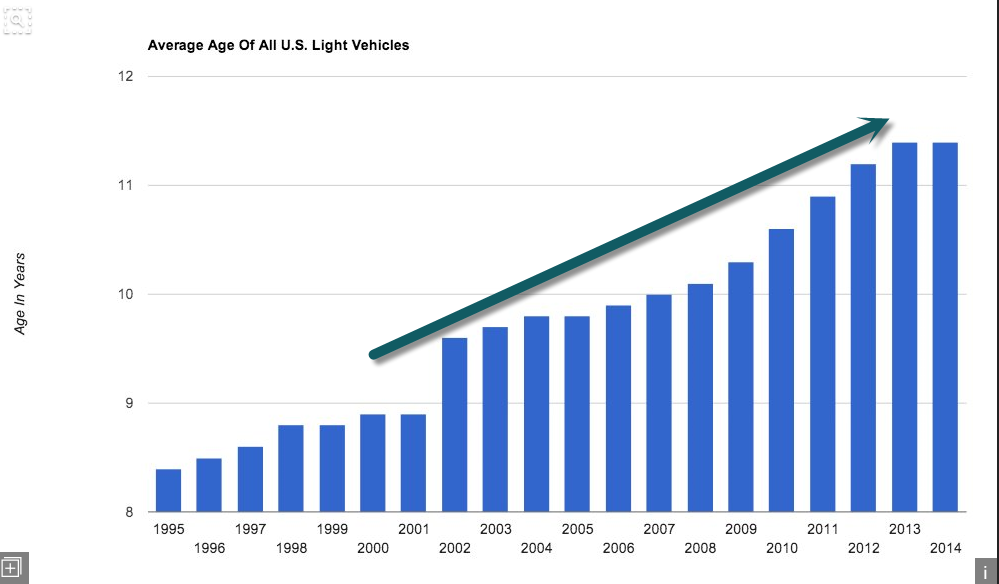 By Anora Mahmudova
Value investing isn’t what it used to be, says Jeremy Grantham
Valuations and profit margins have trended higher since 1997
Grantham: “With higher margins, of course the market is going to sell at higher prices”
Buying stocks that are cheap and out of favor to capture extra return when they eventually recover—a cornerstone of value investing—has worked for decades, but may no longer be a sound strategy due to shifts in how markets operate, according to Jeremy Grantham, founder of asset manager GMO.

Finding truly undervalued companies with the potential to recover requires skill and patience, but the reasonable predictability of valuation trends helped many value investors remain confident in their picks.

In a quarterly letter to investors, laying out his views on the market through the period ending in May, Grantham said that metrics such as price-to-earnings, price-to-book and profit margins, which tended to revert to the mean, are no longer following previous rules. In other words, it’s less clear what’s really cheap or what’s truly expensive. 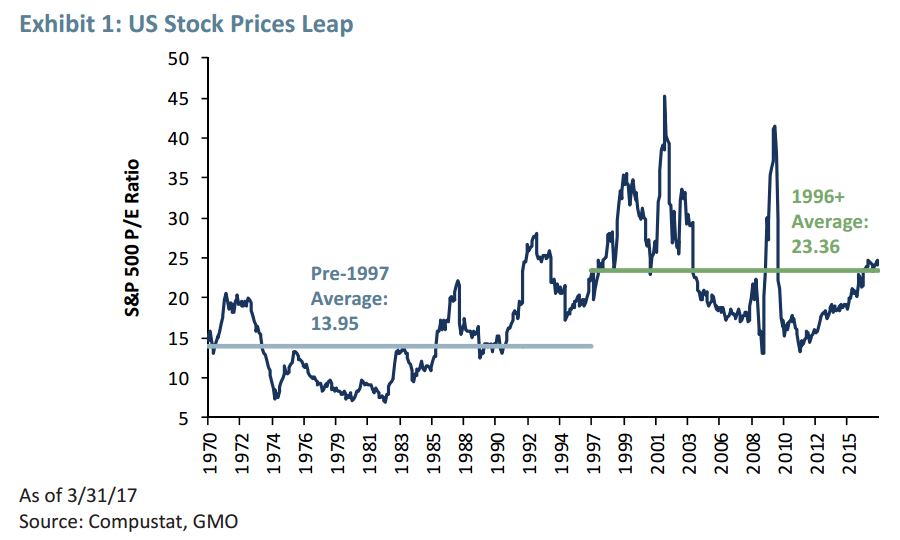 A trend of profitability or profit margins, which Grantham called “the most mean reverting metric” in the past, has also underwent a structural shift, as seen in the charts below: 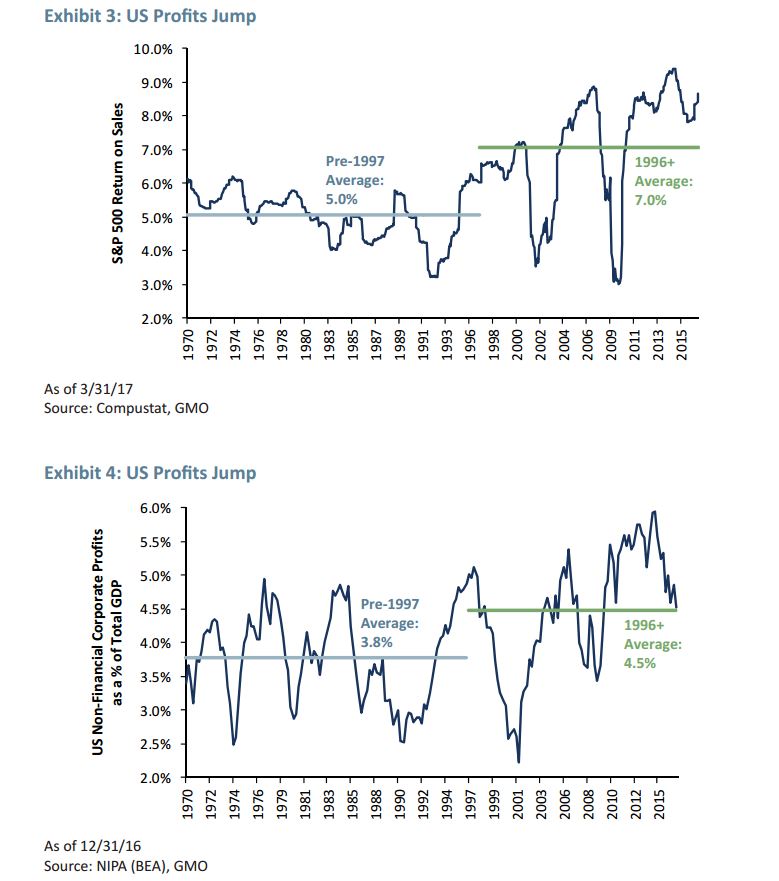 Just like PE ratios, profit margins have shifted upward. “With higher margins, of course the market is going to sell at higher prices,” Grantham wrote.

There are a number of reasons why profitability increased and is likely to remain at these somewhat elevated levels, according to Grantham.

Increased globalization, which increased the value of U.S. brands, paved way for tremendous growth in size, allowing firms to accumulate power and influence over politics and policy along the way.

The result is that corporate profitability is achieved without corresponding growth, which helps explain the reluctance by large corporations in the last several years to boost capital expenditures.

Grantham’s third valuation metric—interest rates—has also undergone a significant transformation. Interest rates, measured by the yield on the 10-year Treasury note TMUBMUSD10Y, +0.68% fell to 1.36% last July, its lowest level ever. On Friday, the yield fell by 4 basis points to 2.17%, declining below its 200-day moving average, and its lowest since November.

If average valuations as well as average profitability are higher and interest rates or discount rates used to calculate future cash flows are lower, then stock prices should continue to rise, concludes Grantham.

“Net-net, unless there are some substantial unexpected negatives, U.S. corporate margins will be up this year, making for the likelihood, in my opinion, of an up year in the market at least until late in the year. This does seem to make the odds of a major decline in the near future quite low (famous last words?). Next year, though, is a different proposition,” wrote Grantham.

It is possible that profitability, interest rates and valuations will move back to pre-1997 trends, Grantham writes, but it will take longer than any value manager, including himself, would like to wait.

Áine Cain
Bad habits die hard.
And while having one doesn’t necessarily make you a failure, that doesn’t mean you shouldn’t work on dropping some of your worst vices.
Some bad habits could cause others to view you as unsuccessful, while others may be indicative of a larger problem in your career — and life.
Here are the top 13 habits of unsuccessful people:
View As: One Page Slides
Keeping your mouth shut
You keep your head down. You don’t speak out. You don’t get out of line.
Your aversion to putting yourself out there professionally may seem like a good protective measure, but it’s holding you back.
If you feel like your current work environment actively discourages people from sticking their necks out for fear of reprisal, you may be dealing with a toxic work environment. If you’re just psyching yourself out, though, you’ve fallen into a terrible habit.
Fidgeting
Fidgeting might actually be good for you, in certain cases.
Still, try to limit the squirming around other people. It makes you look anxious and antsy, which in turn might make your colleagues nervous and uncomfortable. It’s a bad habit that might drive others away.
Always running late
We all have that one friend who is constantly late. Or maybe you’re that friend who is constantly late (I know I am).
In your career, though, tardiness can’t be excused by a few desperate, emoji-ridden messages to your friends’ group text. Showing up late makes you look careless and unreliable.
Holding grudges
I’m not telling you that you need to walk around singing kumbaya. It’s fine and normal to dislike and distrust certain people.
But holding intense grudges is just a waste of your valuable time and energy. Also, if you express these feelings to other people, you run the risk of sounding vengeful and kind of scary. Learn to let things go.
Conforming
Conforming was a survival tactic in middle school, but you’re an adult with a career now. Stop caring intently about what others think. Do what works for you.
If you devote all your time to blending in, you won’t stand out.
Overspending
If money’s always burning a hole in your pocket, you’re setting yourself up for longterm financial woes. Saving money is crucial for your financial future.
Beat this habit by learning to identify psychological triggers for overspending.
Procrastinating
I’ll tell you all about the downsides of procrastination later.
Just kidding. Seriously, though, indecisiveness could lose you time, money, and even the respect of those around you.
Lying
This one’s pretty simple. Be honest. It’s easy to fall into the trap of weaving small untruths that stretch into bigger and bigger lies. Break that habit.
Yeah, there are horror stories about cheats and liars who schemed their way to the top. But that doesn’t mean you should develop a dishonest, Machiavellian streak (although, in fairness, Niccolò Machiavelli’s bad rep is not entirely fair).
Speaking without thinking
It’s important to be authentic. That doesn’t mean you should be spouting off without thinking, though.
Don’t be the person that blurts out whatever’s on your mind. It’s an annoying habit that can make you seem rude, awkward, and uninformed.
Gossiping
Gossip’s a mixed bag. Sometimes it’s necessary; some employers even encourage it.
Most of the time, though it’s a nasty and distracting habit. If you’ve basically become the Littlefinger of your office, you need to chill. Your empire of rumors could come crashing down around you at any moment — or, at the very least, you might seriously alienate your coworkers and bosses.
Complaining
Complaining is like a competitive sport for some people. Everyone has gripes. Plus, bottling things up isn’t a good thing. Sometimes, it’s good to air your grievances and make yourself heard. Just don’t be the person who never stops grumbling about trivial matters.
Zoning out
I’m definitely guilty of this one. Spacing out can actually be a gift, especially when you want to tune out the world and dive into a good book.
But this habit can also really hurt you in the workplace. Listening is an important skill. No one trusts the competence of anyone who’s constantly zoned out. Save the daydreaming for after work.
Wasting your weekends
You might strive to be put-together Monday through Friday, but if you’re a total mess on the weekends, that could come back to haunt you.
Wasting your weekends can ultimately set you up to look like a failure. If you spend your days off overeating, drinking too much alcohol, wasting money, and putting off tasks, you’re going to end up projecting the idea that you’re not a terribly successful person.
Plus, those vices will likely catch up to you on Monday.
http://www.businessinsider.com/habits-of-unsuccessful-people-2017-6/#keeping-your-mouth-shut-1