1.It took the US Half a Century to grow its corporate bond market to $3 trillion….In 7 years we doubled that…. 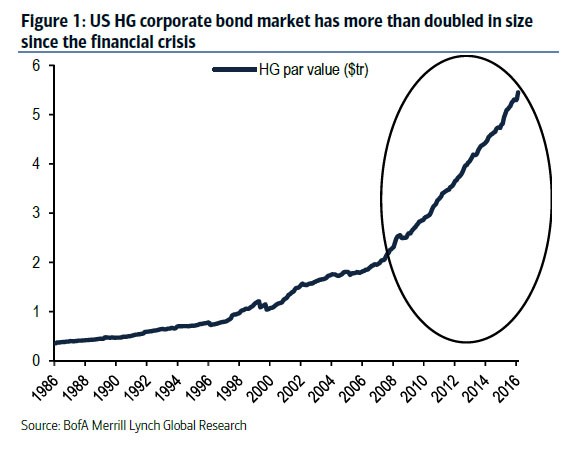 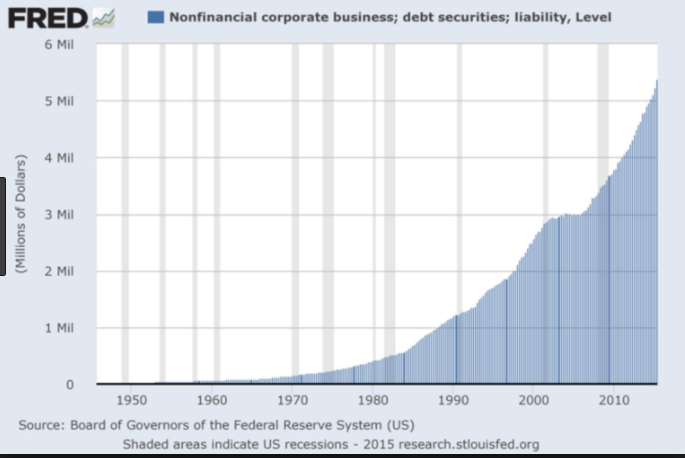 2.20 Years Ago ..Microsoft Bailed Apple Out of Near Bankruptcy.

Twenty years ago, things could hardly have been more different. With Microsoft Windows–based personal computers dominating the market, Apple had slumped to a 12-year trading low and was on a path toward bankruptcy. Jobs, ousted in 1985, had returned as interim CEO, promising innovation, but he badly needed cash. Microsoft chief Bill Gates, under scrutiny by antitrust regulators, stepped up with a $150 million lifeline. At the time, Apple was valued at $1.7 billion, about 1% as much as Microsoft. 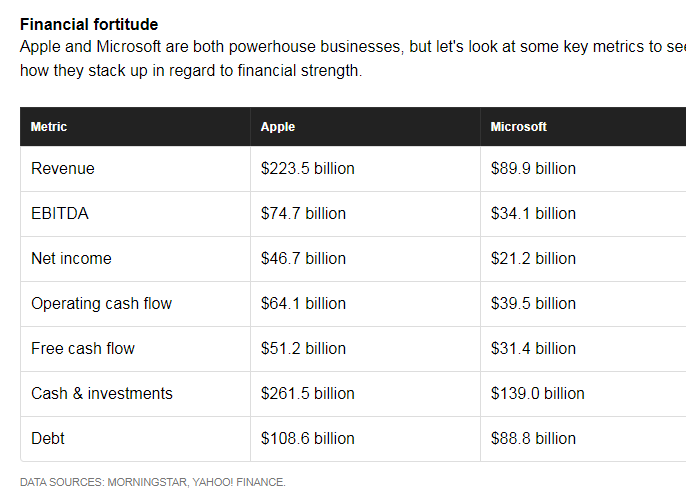 Credit: US leveraged loan issuance is officially at a record high in 2017. 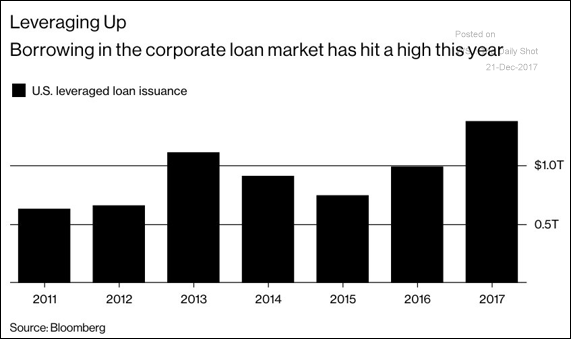 4.One Retailer is Not Experiencing Death by Amazon this Year…WMT

When Walmart paid $3 billion for Jet.com and its founder Marc Lore, the promise was that the entrepreneur would help the retailer appeal to new types of customers. Here’s the next step in that evolution. A new Walmart subsidiary, called Code Eight, has recently started testing a personal shopping service for “busy NYC moms”, with the goal of letting them get product recommendations and make purchases simply through text messaging. The target customer is described as a “high net worth urban consumer” certainly not the historical sweet spot for Walmart’s main business. They are also working on another under-the-radar project, dubbed Project Kepler. This effort aims to reimagine the in-store shopping experience with the help of technologies like computer vision. Multiple people familiar with the project tell that one goal of the initiative is the creation of physical stores that would operate without checkout lines or cashiers, in a similar fashion to Amazon’s futuristic “Amazon Go” Store. More Info 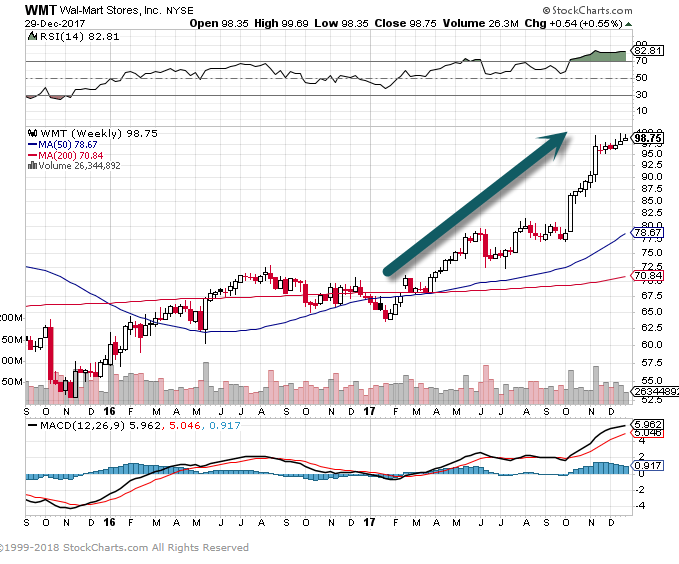 5.The More Stocks You Hold, The More You Resemble the Benchmark. 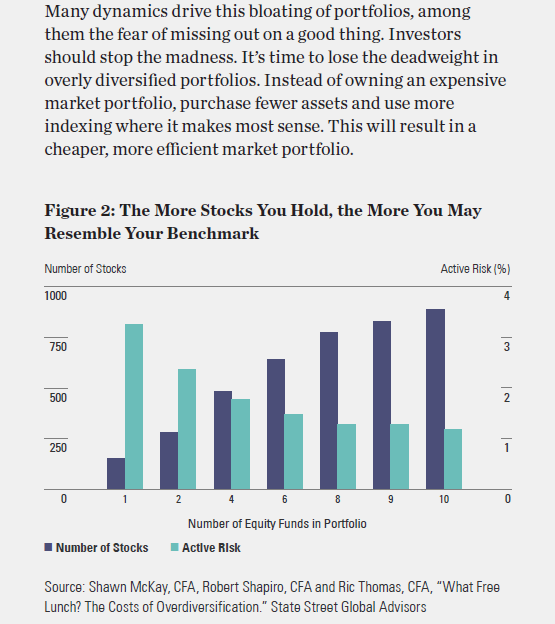 6.Will 2018 be the Year Rates and Stocks Rise Together?

We expect 10-year rates to increase to 3% by the end of next year, and the current correlation between Treasury rates and S&P500 suggests that stocks should move higher as well in 2018, see chart below. The biggest risk to the positive correlation seen in the chart is higher US inflation. As the chart shows, in the 1970s, 1980s, and early 1990s when inflation was above 2% the correlation was negative.

Our baseline scenario is that rates and equities will go up together in 2018, but the risk is that a sudden jolt by the ECB to global rates or upside surprises to US inflation will push the correlation negative. Why would higher US inflation be a problem for equities? Because if inflation rises faster than expected, then the Fed has to raise rates faster than expected. And the whole idea with Fed hikes is to cool down the economy, which ultimately means that the Fed wants to cool down the revenue growth of S&P500 companies. Cooling down revenue growth and earnings for S&P500 companies is obviously bad news for the S&P500, in particular, if the Fed-triggered cooling down happens too quickly. That is why we think there is an elevated probability that the US economy will enter a recession in 2020  (see also our recent piece “The Next US Recession”). For more see also here, here, and here. 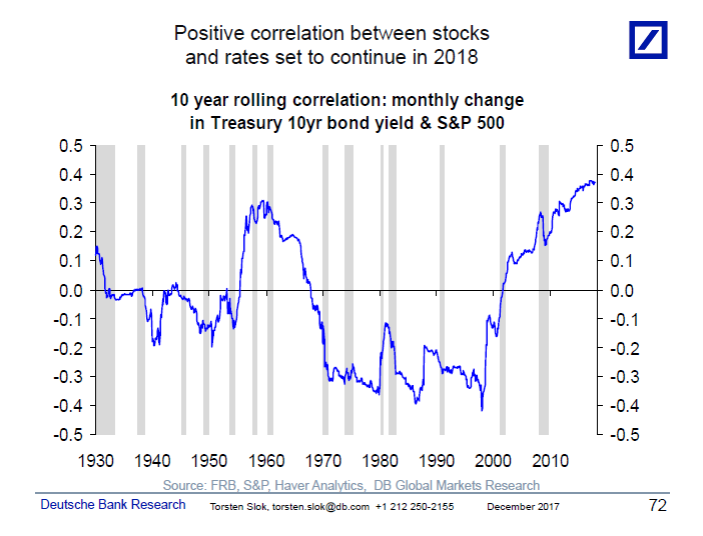 7.Totally Nuts…They OK Credit Card Use for Bitcoin and Look What Happened. 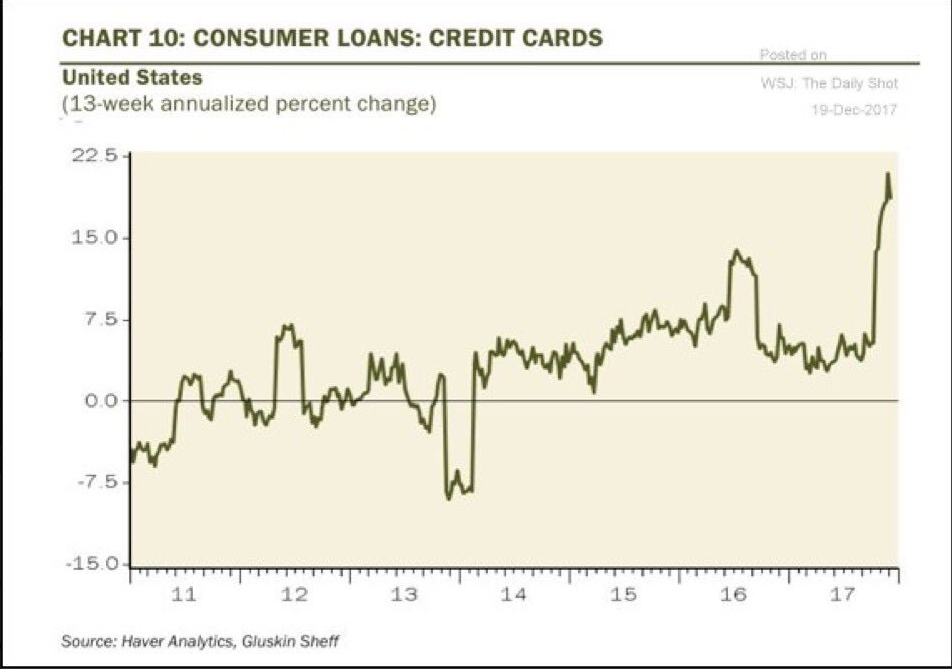 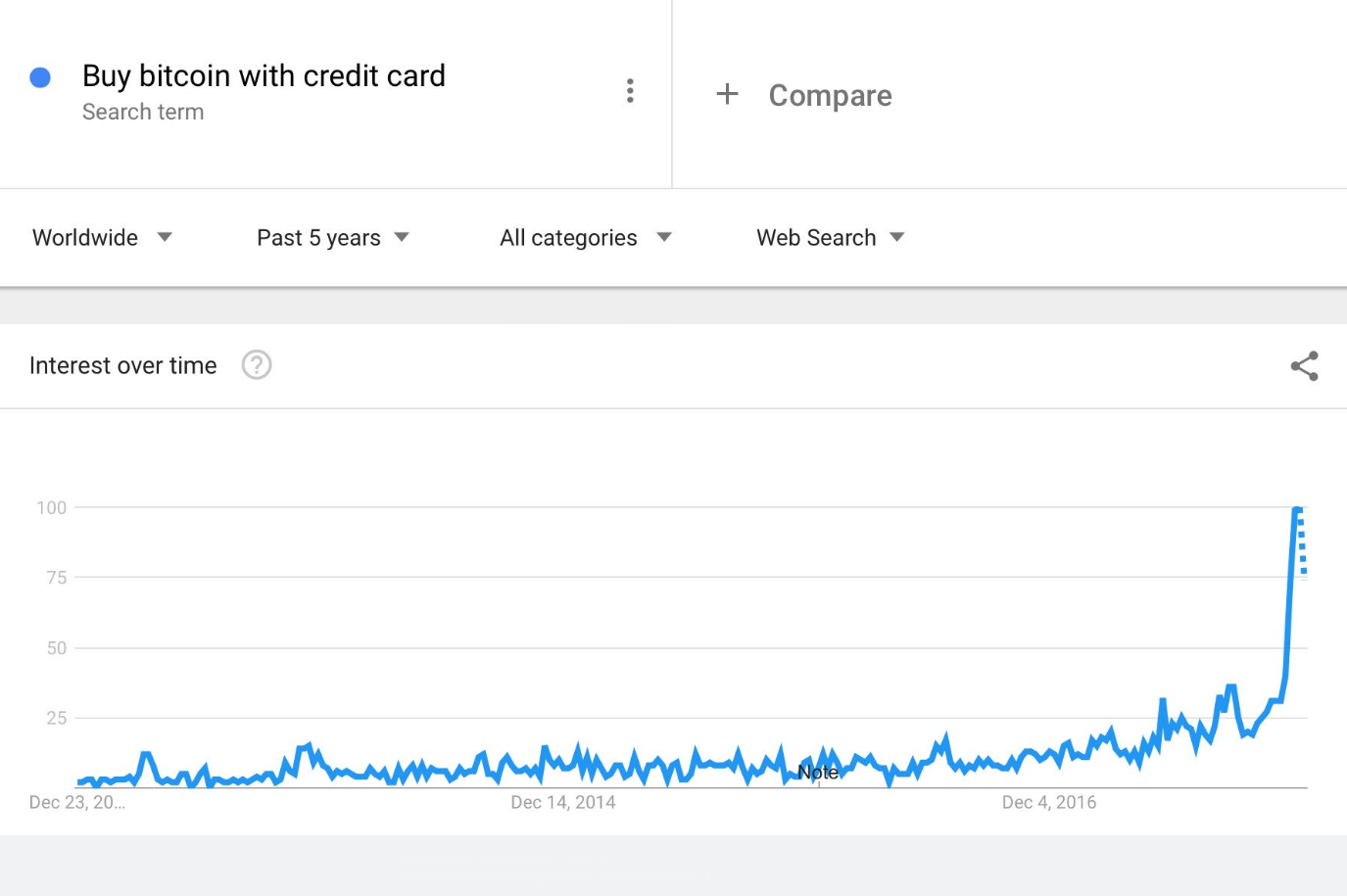 8.Bitcoin?  How About 1300 Cryptocurrencies?

“The futures market for gold is approximately 10 times as large as the actual amount of physical gold that exists,” says Barker. “We expect this to happen with cryptocurrencies, too.” However, nobody knows exactly how big the market is for the various cryptocurrencies, which include ether, litecoin, XRP, and more than 1,000 others. According to CoinMarketCap, which takes a stab at calculating the market valuation of more than 1,300 cryptocurrencies, there was more than $220 billion worth of bitcoins as of Dec. 20. That puts the potential futures market for bitcoin at nearly $2.2 trillion. Those figures likely were smaller by week’s end. 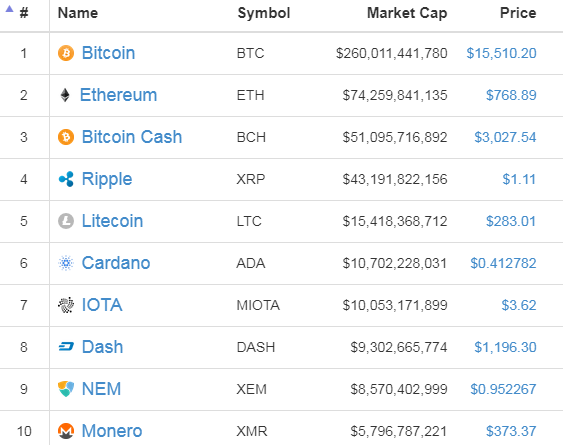 Rates: What happens to US economic indicators during a bond bear market? 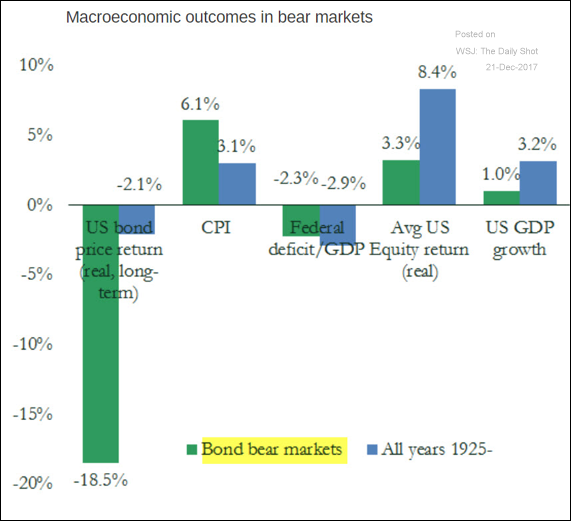 From The Daily Shot Blog

Find out which mind-body practices and dietary habits boost brainpower

Your brain is a complicated and dynamic structure, consisting of about 86 billion neurons or nerve cells. Each neuron is linked to thousands of other neurons, forming intricate networks of neural connections that transmit information to help us perform important functions like breathing, moving, remembering, responding to threats, learning from experience, controlling impulses, and forming attachment relationships. Cultivating optimal brain health is the foundation for healthy and successful living, learning, and loving.  Research shows that you can boost brain power by living healthier, napping, and practicing mindfulness, which has been shown to alter the physical structure of the brain in beneficial ways.

Below are 6 practical ways you can improve brain health:

Incorporating more fruits, vegetables, and lean protein sources in your diet can help protect your brain, according to the latest research. A 2017 study by researchers at the University of Edinburgh in Scotland showed that eating a Mediterranean diet may protect against memory and thinking damage associated with aging.  This type of diet consists primarily of olive oil, vegetables, fruits, fish, beans, dairy, and healthy grains and less white processed flour, red meat, and sugar.  In this study of almost 1000 people, elderly adults who followed the Mediterranean diet principles more closely were less likely to lose total brain volume over a 3 year period. Other studies show that consuming extra-virgin olive oil, which is a large part of the mediterranean diet,  can protect memory and learning ability.

A ketogenic diet consists of low carbohydrate intake and higher fat intake, along with moderate protein.  The Atkins diet is an example of a ketogenic approach to eating.  The idea is to consume about 70% of calories from fat, 20 – 25% from protein, and only 5-10% from carbohydrates. Research studies show memory benefits of a ketogenic diet in mildly memory-impaired adults, Type 1 diabetics, and people with Alzheimers. The effects of this type of diet on healthy adult brains have not been as well studied.  The idea behind a ketogenic diet is that when the brain cannot rely on carbohydrates to get the glucose it needs, your body creates ketones from fats in the liver, which act as an alternate source of brain fuel, increasing your brain and body’s efficiency in burning fat for energy.

Certain healthy fruits and vegetables have been shown to predict improved performance on cognitive and memory  tests and higher levels of healthy brain chemicals.  Nuts contain magnesium, which is good for memory. In a 2015 study from UCLA, walnut consumption was associated with higher cognitive test scores.  Avocados are high in monounsaturated fats shown to protect brain cells. Blueberries, leafy green vegetables like kale, peppermint tea, coffee, and almonds have all been linked to healthy brain chemicals or improved memory performance. Blueberries contain antioxidants that improve brain health and also have anti-inflammatory properties.

Sleeping gives your brain and body  a chance to repair cells, consolidate memories, and recharge itself. Sleeping well can improve memory and cognitive function, and heart function as well. Studies show napping helps us retain new information better. In one study, participants memorized illustrated cards to test their memorization abilities. After memorizing a set of cards, they had a 40-minute break in which one group napped, and the other stayed awake. After the break the group who had napped performed better on a test of their memory of the cards. Napping pushes memories from the hippocampus to the cortex, which allows for more permanent storage and integration with other information.

Aerobic exercise has been shown in numerous research studies to have a host of brain and memory benefits while sedentary behavior has been linked to obesity and elevated mortality. In a study presented at the 2016 meeting of the Radiological Society of North America, researcher Laura D. Baker from Wake Forest University and her colleague compared the effects of aerobic exercise to stretching in adults with mild cognitive impairment. Both groups exercised four times a week over a 6-month period.  While both groups experienced an increase in brain volume in specific areas, the aerobic exercise group showed greater gains. According to Dr Kim, the co-investigator on the study, “Compared to the stretching group, the aerobic activity group had greater preservation of total brain volume, increased local gray matter volume and increased directional stretch of brain tissue,”

Mindfulness is a meditation practice and attitude to living that trains the brain to focus on the present moment with open, compassionate, nonjudgmental awareness, rather than just reacting automatically, being self-critical, and living on autopilot. A meta-analysis(statistical review) of over 20 neuroimaging studies from 300 meditation practitioners showed that mindfulness resulted in significant, medium effect size changes in eight different brain areas including areas associated with memory consolidation (hippocampus), body awareness, self-awareness, emotion regulation.  Perhaps this is the reason why so many large companies like Google have embraced mindfulness training for their employees.

We can all give our brains a healthy reboot by following research-based principles for living, eating, sleeping, exercising, and managing our stress.