Ben Carlson-A Wealth of Common Sense-Surprisingly, each of these stocks is now underperforming the S&P 500 since the per-pandemic days at the start of 2020: 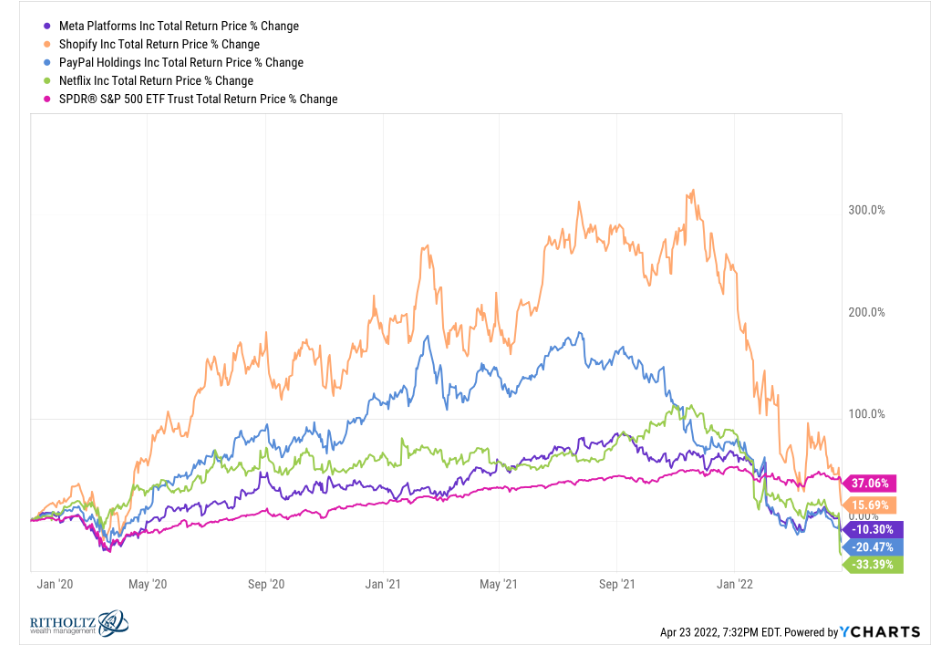 2. What has Market Priced in Regarding FED Rate Raises? 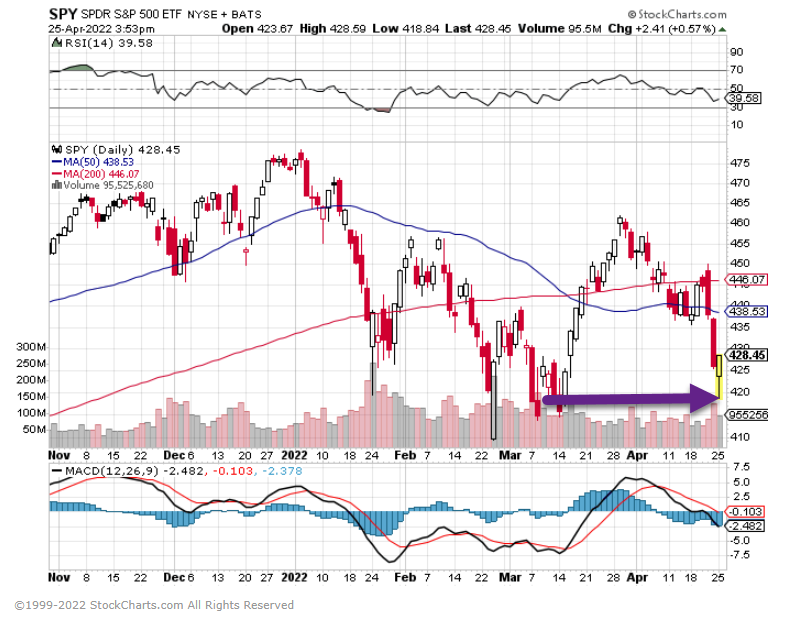 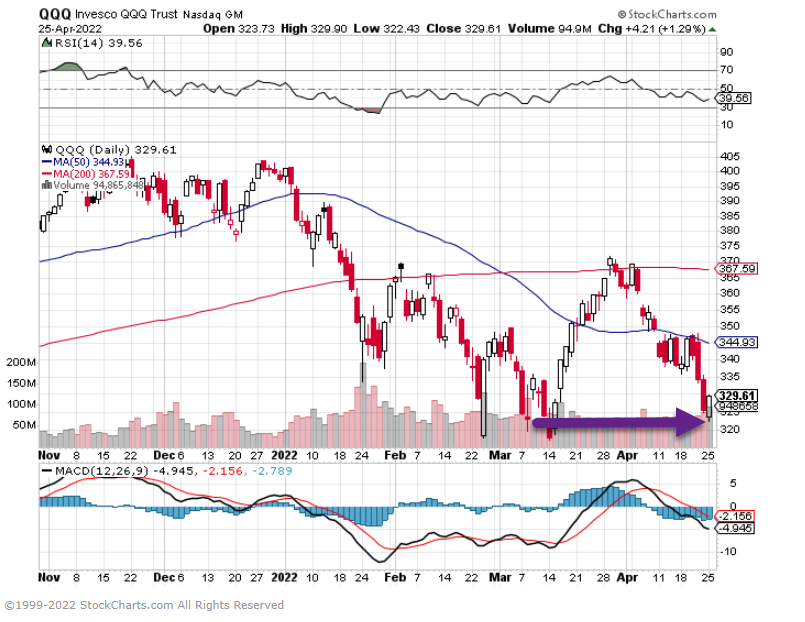 The Put/Call Ratio is an indicator that shows put volume relative to call volume. Put options are used to hedge against market weakness or bet on a decline. Call options are used to hedge against market strength or bet on an advance. The Put/Call Ratio is above 1 when put volume exceeds call volume and below 1 when call volume exceeds put volume. Typically, this indicator is used to gauge market sentiment. Sentiment is deemed excessively bearish when the Put/Call Ratio is trading at relatively high levels and excessively bullish when at relatively low levels. Chartists can apply moving averages and other indicators to smooth the data and derive signals.

A Put/Call Ratio at its upper extremities would show excessive bearishness because put volume would be significantly higher than call volume. Excessive bearishness would argue for optimism and the possibility of a bullish reversal.  www.stockcharts.com 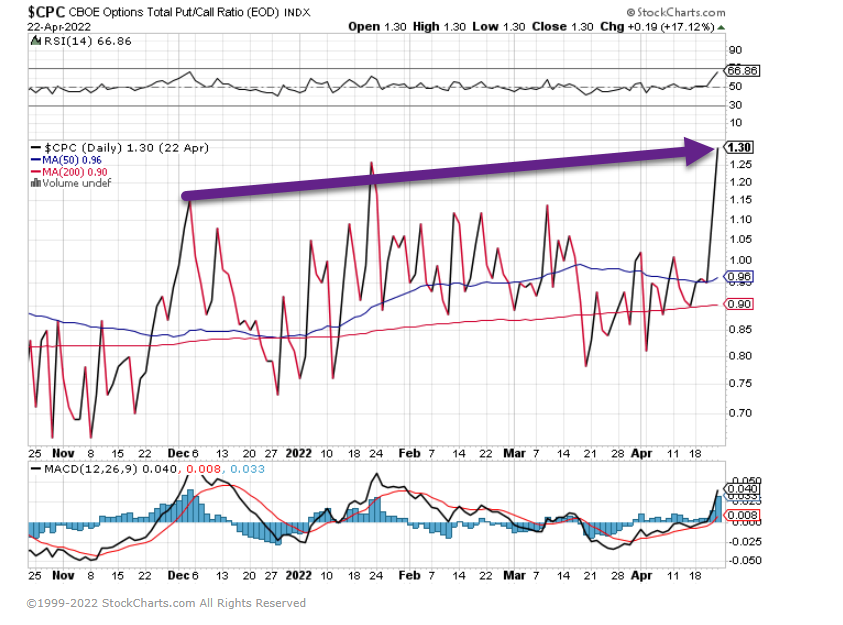 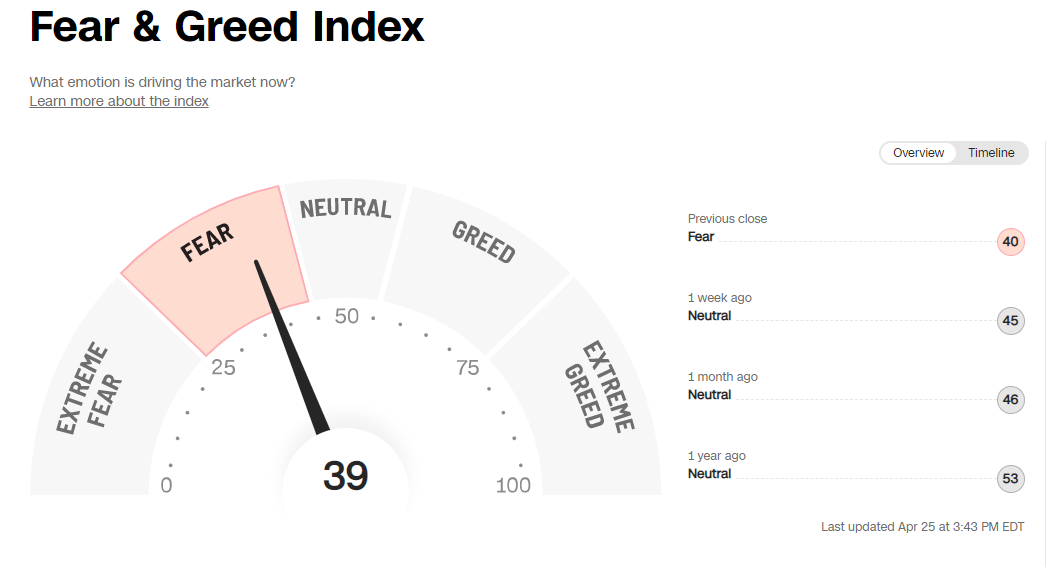 5. The Broad Commodities Index vs. Gold 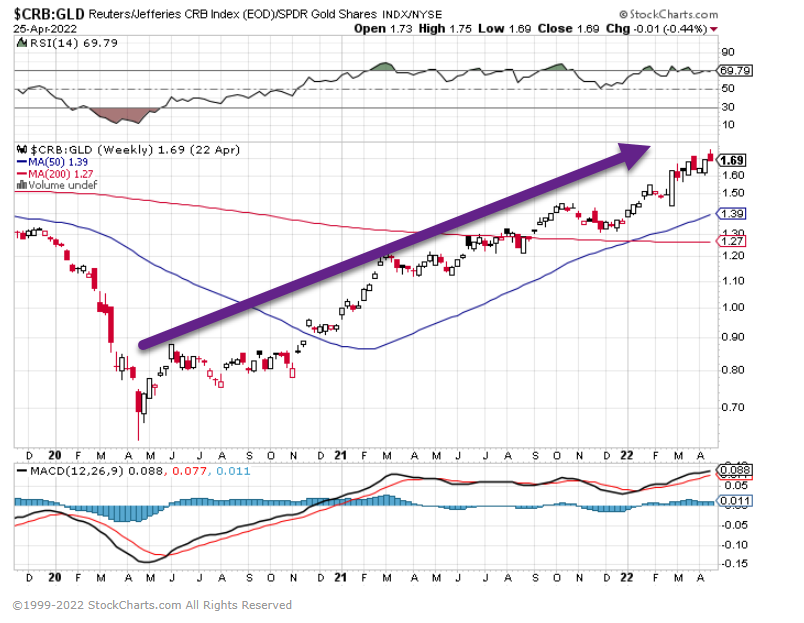 Jim Reid DB-We have just launched our latest monthly survey, which has lots of questions on inflation, rates, potential policy errors in either direction, and a terminal state WFH question to compare to those we compiled early in the pandemic. The survey will likely stay open until Wednesday lunchtime BST. It’s anonymous, and you can skip any question you don’t want to answer. As always, I’d appreciate all support in filling it in. The link is here.

Over the last week or so, German 10yr breakevens briefly edged above their US equivalent for the first time since 2009. For most of the last decade the differential has been between +50 to +100bps in favour of the US with the peak only just over a year ago at +116bps.

So it’s been a remarkable turnaround and had you said 12 months ago that German inflation would average more than the US over the next decade, you would have been looked at quite strangely.

Clearly, much of the move has been energy related with Europe’s energy costs more at risk over the next few years than the US’s. Speaking to DB’s Francis Yared, he confirms the energy story, especially in the near term, as European 2yr inflation swaps also edged above the US equivalent last week. However, if we look at the 5yr5yr inflation swap differential between the two regions there is still a c.25bps higher rate in the US than in Europe. However, the differential is close to the narrowest its been outside of the GFC period.

In our survey, there is a recurring question about your long-term inflation expectations in the US and Europe, so it’ll be interesting to see if you believe the converging trend is justified or not. 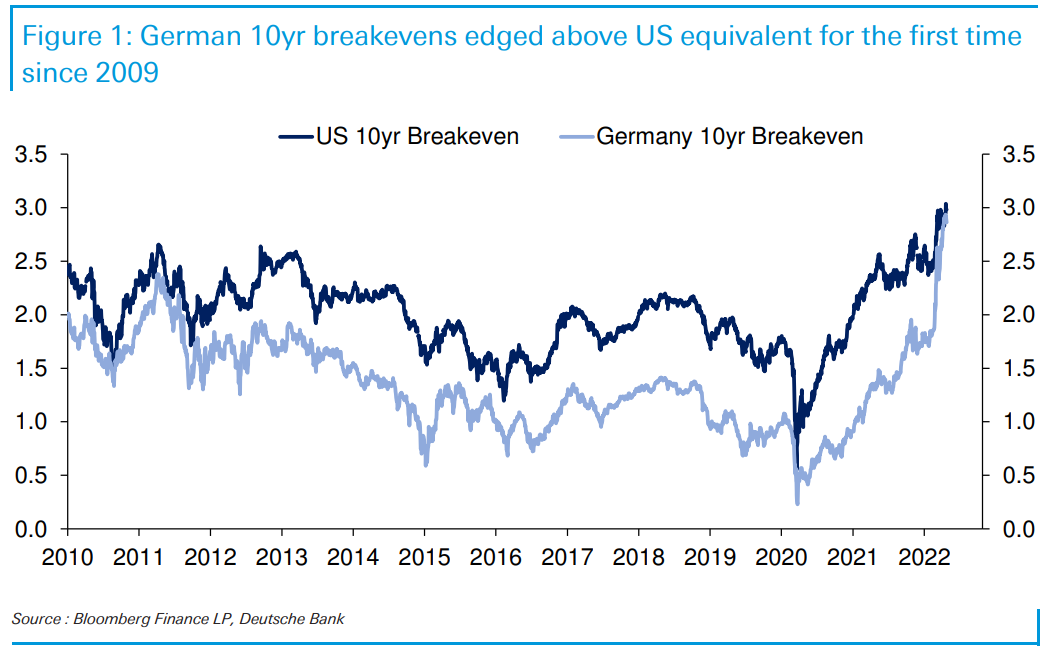 7. Net Net Coal Still Much Higher Usage in Last 25 Years….Flat for 15 Years but Not Down.

Bloomberg-In 2021, the world generated more electricity from coal than ever before, with an increase of 9% from the previous year, according to the International Energy Agency. For 2022, total coal consumption — for generating power, making steel and other industrial uses — is expected to rise by almost 2% to a record of just above 8 billion metric tons and remain there through at least 2024.

“All evidence indicates a widening gap between political ambitions and targets on one side and the realities of the current energy system on the other,” the IEA said, estimating that carbon-dioxide emissions from coal in 2024 will be at least 3 billion tons higher than in a scenario reaching net-zero by 2050. 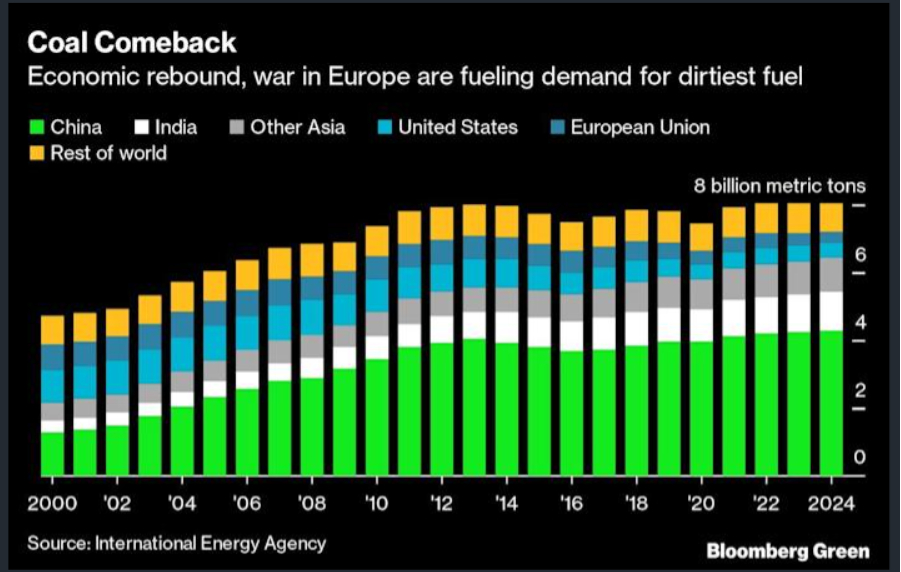 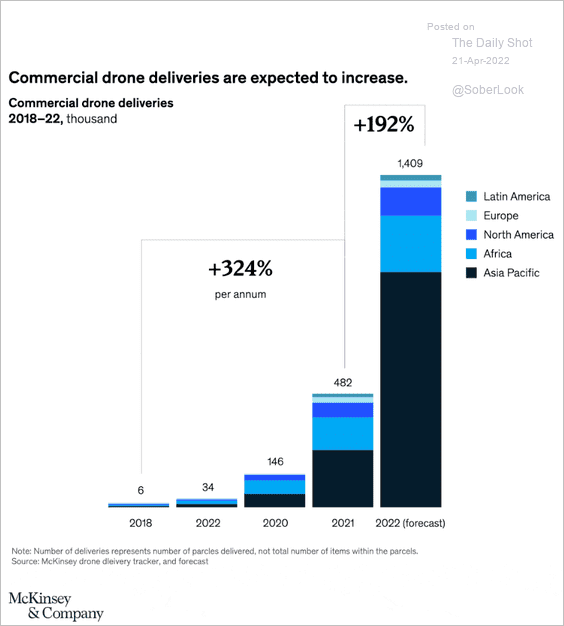 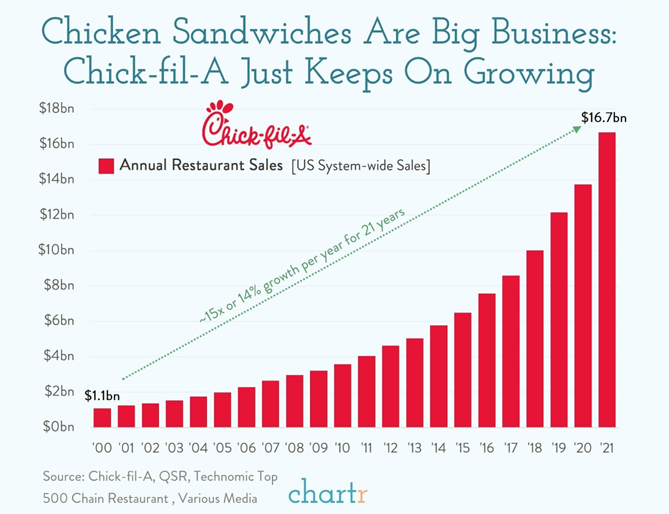 10. 5 Reasons Creativity Gets Crushed at Work

Our creative spirit in the workplace can be affected by constant criticism-–Anthony D. Fredericks Ed.D.

Let’s say you’ve got a great new idea, an idea that will transform your department into a dynamic new entity within the company. Profits will soar, people will be happy, and, of course, you’ll get a substantial raise. You bring this new idea to the weekly department meeting and announce it to all your colleagues. There is stunned silence. But, finally, from somewhere in the back of the room, somebody raises their voice and says something like, “That’s got to be the most ridiculous idea I’ve ever heard! It’ll never work!”

You’ve effectively been shot down. You’ve been hit between the eyes with a verbal bullet and your idea, for all intents and purposes, has been killed on the spot. It probably wouldn’t surprise you to know that many of us are assailed by these verbal put-downs regularly. That negativity frequently infests our workplaces where criticism is not only condoned but is often the modus operandi of an organization.

Some people are masters at tamping down new ideas. These are the naysayers—those folks who challenge every new idea as though it was a bad idea. They’ll say “no” at the drop of a hat. In many cases, it’s the result of our natural resistance to change. Change is something new and thus change is scary. Cro-Magnons may have been reluctant to hike over a mountain ridge because they didn’t know what (or who) they’d meet on the other side. They had established a comfort zone on one side of the mountain and venturing into a new environment probably meant a new set of survival skills. “Let’s play it safe,” “Let’s not take that chance,” they may have said. “No” is safe, and “yes” holds the possibility of unknown dangers, new fears, and lots of uncertainties.

Modern humans often have the same set of apprehensions—living their lives in fear. “Stay with what’s comfortable; what’s known,” they say to themselves (and others). Consequently, they want to wrap others into that comfort zone—imposing their will on colleagues who may wish to venture outside that zone and see what’s “on the other side of the mountain.”

Why Ideas Are Crushed

Why do some people feel compelled to say “no” to every new idea? Let’s take a look at a few reasons.

First, it’s a control issue. For example, when you tell someone her idea is no good, you exert a measure of control over her. Those we refer to as “control freaks” are often the ones who want to trample our energy and enthusiasm. It wasn’t their idea, so it can be controlled by saying it was a bad idea. They maintain their control by rejecting our ideas.

Second, there is a region of the human brain known as the amygdala, which serves as an automatic alarm system whenever there is danger (or the possibility of danger). Many psychologists believe this is the brain’s default position—that is, if something new and unusual appears in front of us, we have a natural tendency to picture it as harmful or dangerous. As a result, we will either protect ourselves or flee from the potential danger. In evolutionary terms, this is how prehistoric humans survived a harsh and often unpredictable environment. In modern terms, this means that new ideas are often viewed as dangerous ideas. And, if an idea is dangerous, then it must be squelched.

Third, some people are more comfortable being pessimistic. They see the glass as half-empty, they view the world as a negative environment, they always see the “bad” in a situation, and they always want others to know of their dissatisfaction with the way things are. When someone shares a positive idea, they seek to counter it with a negative reaction. These folks are reactionaries rather than visionaries. They are most comfortable in maintaining the edges of “the box.” As you might imagine, these are individuals who frequently solicit collegial approval. Thus, if someone doesn’t tell them they’re doing a good job (regularly), they certainly aren’t going to celebrate the ideas of others.

Fourth, some people are locked into a “fixed mindset.” They are incapable of embracing new ideas just as they are incapable of embracing change. They resist change in themselves, just as much as they resist change in others or in an organization. For them, change is difficult to fathom—it’s an intimidating proposition. It’s a journey into new territory and for some, that’s both frightening and worrisome. They are content right where they are, so why do things differently? Why venture into the unknown when the “known” is very comfortable just as it is?

Fifth, and perhaps most important, naysayers get attention when they say something that goes against the grain. They are recognized (often for the wrong reasons) for a gibe, a put-down, a taunt, a sneer, or an insult. The spotlight is (temporarily) on them. They are the center of attention. Moreover, they get a reaction—sometimes a negative reaction—but for a moment, all eyes are on them. They’ve inserted their thoughts and (re)claimed their space.

Are your new ideas crushed by colleagues?