The Rolling Stones were not talking stocks when they wrote “Emotional Rescue,” but as the song says, we all need a knight in shining armor. As discussed in last week’s article, investing is all about the 7 inches between your ears. Much like sports, relationships or work, optimizing your wealth has a lot to do with controlling your emotions.

The idea of selling in preparation for the next crash feels good in theory, but we believe this poses one of the greatest threats to investors’ long-term financial wellness. It usually feels safe for investors to jump back in after the markets had a significant rally off the bottom, hence the increase in equity money flows after a 30% return in 2013.

Dalbar Quanitative Analysis of Investor Behavior recently calculated a 20-year retail investor return of 5.02% vs. 9.22% for the indices. 1 A large percentage of this gap can be attibuted to impulsive decision-making as a result of heightened investor emotions. Acting upon this emotional mindset creates what, for many, can be a life-defining gap, when considered over 20 years. For example, on a base of $100,000, the investor with a 5.02% return would grow their money to $266,342, while the investor with 9.22% return would reap $583,503. A whopping $317,161 difference!

Last week, we talked about “recency bias”; a lot of these poor choices involve “negativity bias”. Negativity bias causes investors to put more weight on bad news than good. Not to go Freud on my financial readers, but this bias has little to do with what is going on in the market, and a lot to do with your personal mindset.

You’re probably thinking missing a few days is no big deal, but see chart below on long-term damage of a few missed days. And remember, you don’t have to go this alone. 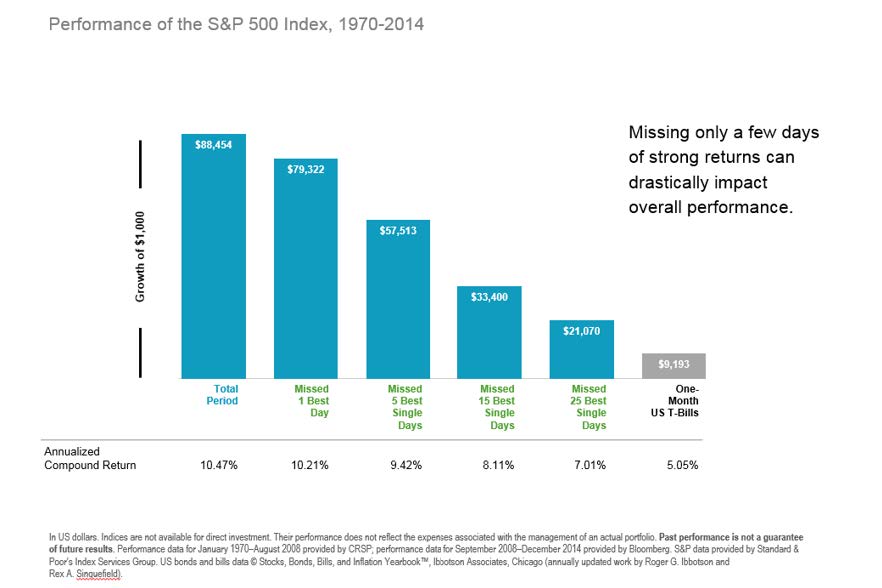