Blinded by the Light


I recently watched Springsteen’s fabulous Broadway performance on Netflix, having seen The Boss over 20 times myself, it still was unreal to hear him tell personal stories around growing up and his career.  As I watched one of the most volatile stock market year ends in history, I couldn’t help but apply investors psyche to a Springsteen song.  Most investors got Blinded by the Light, it was just too easy, buy FANG stocks, buy S&P index, buy anything.  After 2017 being one of the least volatile years in market history including no drawdown of S&P over 3% versus historical annual average drawdown of 14%, the market sent a giant wake-up call that investing is always emotional including an all-time record almost 3% Christmas Eve smack down.  Here’s the good news, it seems she (market) is going to make it through the night as she always does, it’s not 2008 or anything close, we have some wood to chop in the short-term but valuations are reverting to mean.

2018 was a historic year for financial markets in more ways than one-first time in 27 years that stocks and bonds were both negative in the same year, worse stock market December since 1931, over 90% of investable assets were negative in 2018, and no asset class returned over 5% for the first time since 1974. 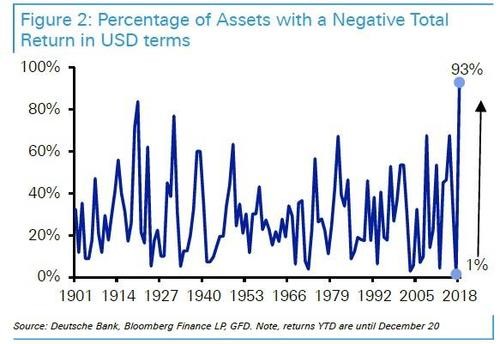 Investors felt pain this year across the board as diversified portfolios were nowhere to hide, in fact some well diversified holdings returned less than the S&P due to exposure to bonds, commodities, international stocks and U.S. small cap stocks.  Three of these groups were down more than the S&P and most bonds were flat to negative.  The tradtional 60/40 model was negative for the year with returns coming in 13% below historic median, if you’re 60/40 was global returns were even lower.  Target Date funds are popular and growing especially in 401k plans, see below as they are posting first negative returns in 10 years. 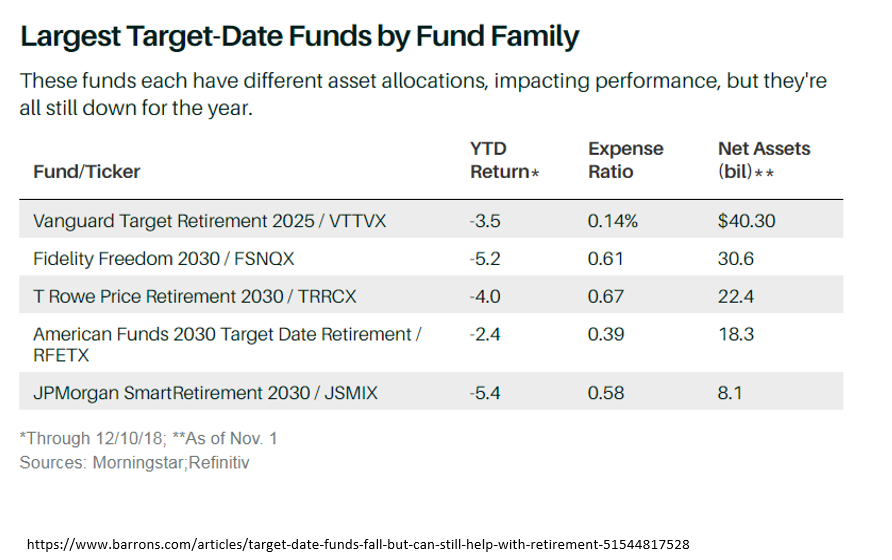 In my first quarter 2018 letter I wrote at length about tech facing its Machevellian moment in the next 12 months, mentioning that a small cadre of tech stocks were responsible for most of the markets gains which is unsustainable.   But the bigger problem was the market was due for sector rotation especially since traditional defensive sectors of market hit record low capatalization in the S&P even lower than 1999 or 2008.  This sector rotation back to defensive certainly started in the 4th quarter now the question becomes how long will it last?

As popular stocks and sectors started to crumble, retail investors as in the past started to get emotional, including pulling a calendar-month record  $98 billion from U.S. based stock funds in December.  In fact it was almost double the previoius record of $48.8 billion in October of 2008.  As anyone who has read my thoughts in the past knows, investors are terrible market timers. 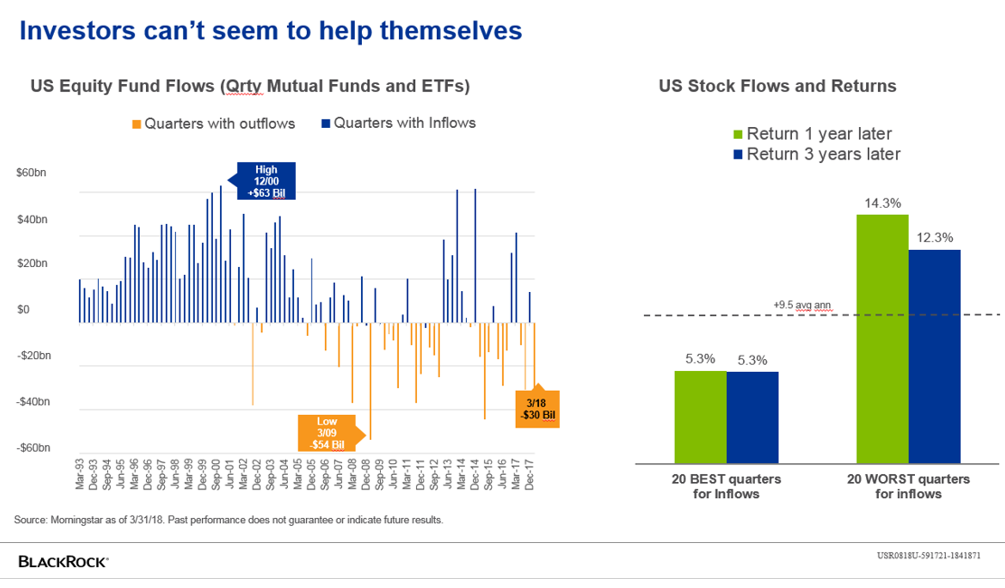 The good news is that markets will most likely, like Springsteen says, “make it thru the night.”  Banks balance sheets are in good shape as are household balance sheets, the debt overhang this time around is corporate debt and private lending, not enough to spark another 2008.  This could leave us looking at a bear market without a recession or a cyclical bear market within a longer-term secular bull.  The good news on these two scenarios is that the pain will be short-lived.  For anyone who is a net saver for the next 5-10 years or more, buying opportunities will present themselves as some are already coming to fruition.

See chart below the length of bull markets versus bear markets, especially some of the shorter corrections or cyclical bears.

History of U.S. Bear and Bull Markets Since 1926 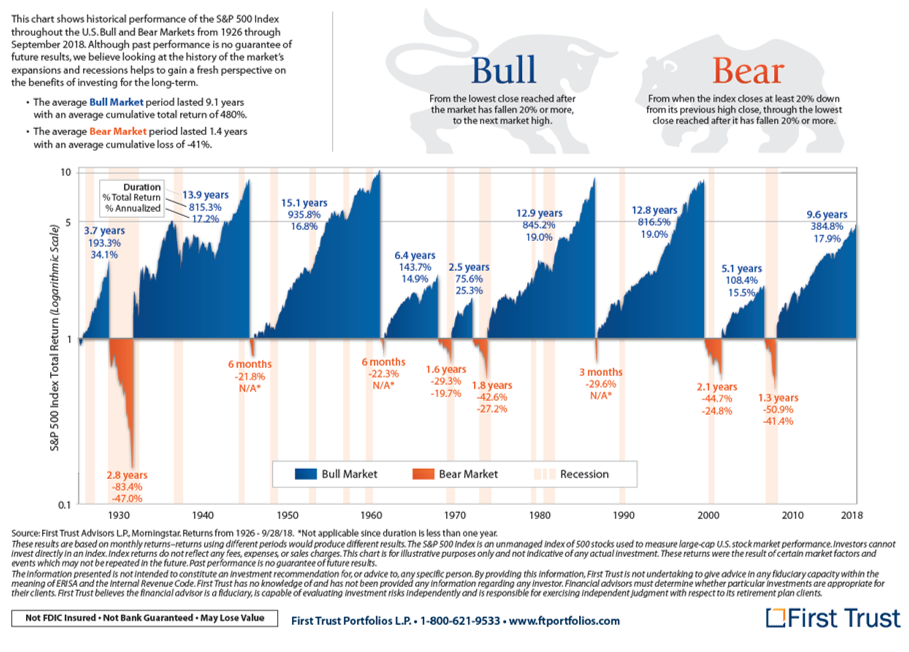 How about returns for the market after bad quarters and months like December?  The market actually has impressive returns on a 1 year, 3 year and 5year basis after a 4th quarter like 2018.  If you strip out the American depression years, last quarter was the top 10 worse quarter in stock market history.  So we should run for the hills right, contrary to the natural emotional response, instead we should channel our inner Warren Buffet and stay to a disciplined system for the long-term. 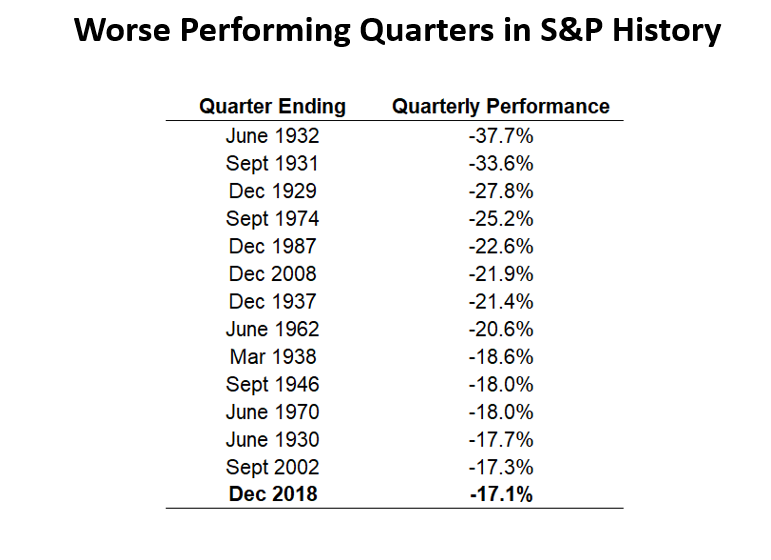 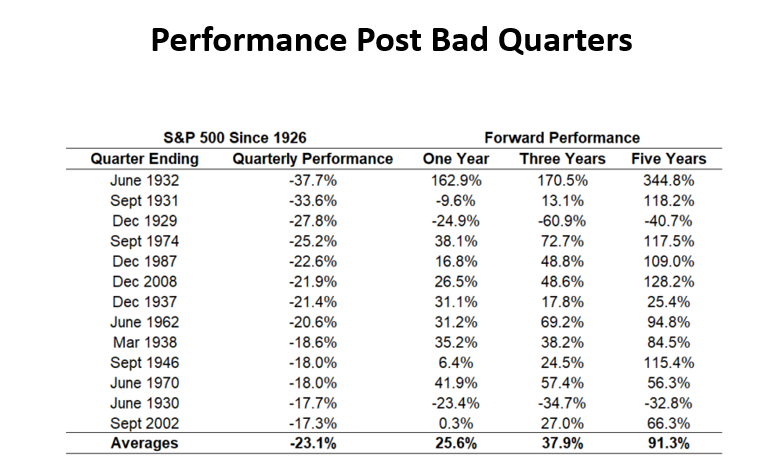 The good news about market sell off is that valuations naturally come down, as you can see in the following chart, S&P price to earnings ratios have pulled back to the mean.  Even though investors and the media love to talk in terms of the S&P, diversified portfolio holders invest internationally, across market caps in U.S., in commodities and real estate.  The even better news is some of these non-S&P asset classes are trading at 25 year lows.  Value stocks are at record discounts to growth stocks in the U.S., International stocks are trading at half the fundamental valuation measures of U.S. growth stocks and commodities are at a 25 year low valuation to the S&P.  The idea that all asset classes are expensive after this 10 year bull market is fake news. 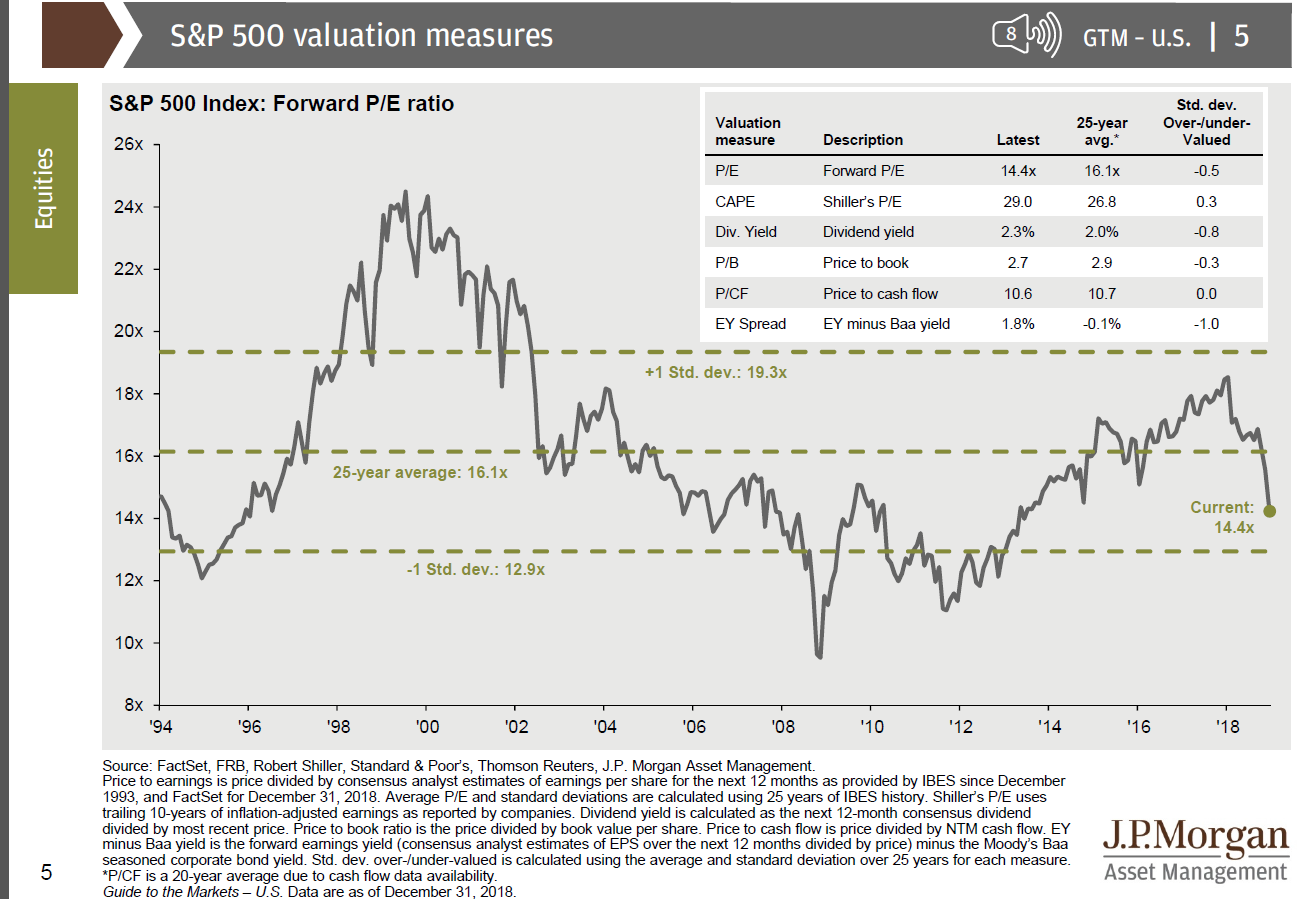 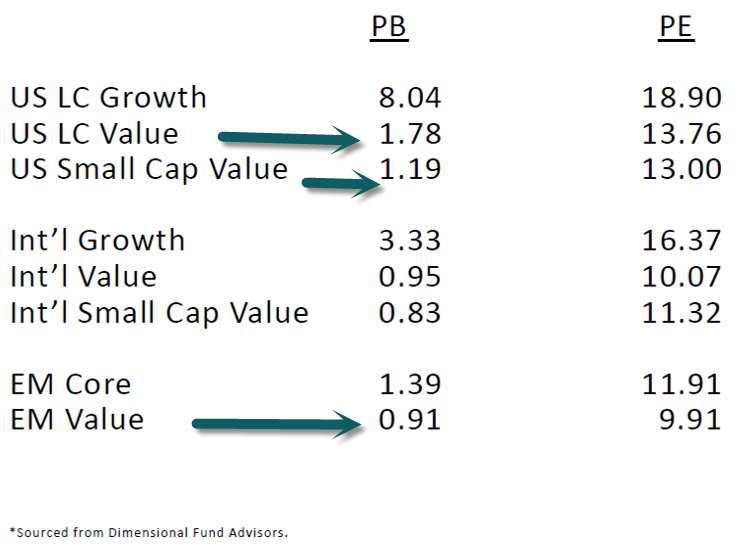 
Diversified portfolios generally work well over the long-term but they are sometimes painful to hold in the short-run.  The last 10 years have been an S&P dominated investment environment, this has left some asset classes behind resulting in cheap valuations.  Investors that are net savers for the next 10 years now have an opportunity to invest more aggressively at more attractive valuations.  As one of our earlier charts indicated most investors are selling, historically this has been the best time to buy and post bad quarters data also puts probabilities in your favor for a 3-5 year horizon.

Investors should expect more volatility in the first quarter as company earnings hit the tape and the market decides whether this is a correction of something bigger.  Valuations in many asset classes have already priced in something bigger but as the song goes “she will make it through the night.”  As I like to remind readers in most letters, the S&P 500 has experienced twelve 20% corrections in the last 70 years and it’s returned 15,000%.  I believe investing is a psychology game not an IQ game, I suggest you keep your emotions in check and stick to your plan.